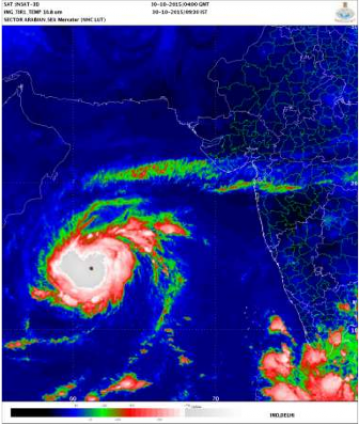 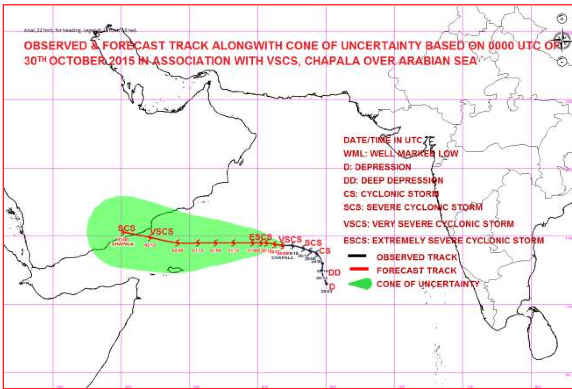 A very rare and potentially high-impact tropical cyclone called Chapala made landfall in Yemen on 3 November.

WMO’s Regional Specialized Meteorological Centre, based in New Delhi, said that Chapala made landfall as a very severe cyclonic storm between 0100 and 0200 GMT, southwest of Ryan and near the port of Mukalla in Yemen. It had maximum sustained surface windspeed of 120-130 kilometers per hour gusting to 145 kph.

It then continued to move northwestwards, weakened into a severe cyclonic storm. Now that it has hit rugged terrain and dry air, Chapala. It is forecast to weaken into a cyclonic storm and susbsequently into a depression.

Chapala had the potential to cause more than a year's worth of rainfall - and perhaps much more - within a matter of hours in a normally very arid area. The mountainous terrain means that there is a high risk of landslides. Yemen is not accustomed to tropical cyclones or such intense precipiation and its infrastructure is likely to be badly impacted. Yemen does not have a functioning observation network so it’s very difficult to verify the amount of rainfall it is receiving.

Chapala intensified rapidly on 29/30 October and developed into a super cyclonic storm with maximum sustained wind speeds of 220-230 km/h, the equivalent of a Category 4 hurricane. It weakened before landfall because of dry air and lower ocean thermal energy.

The track of Chapala was highly unusual as cyclones in the Gulf of Aden are extremely rare. Tropical Cyclone Gonu was the last major cyclone in the Arabian sea, causing several billion worths of damage when it hit Oman in 2007.