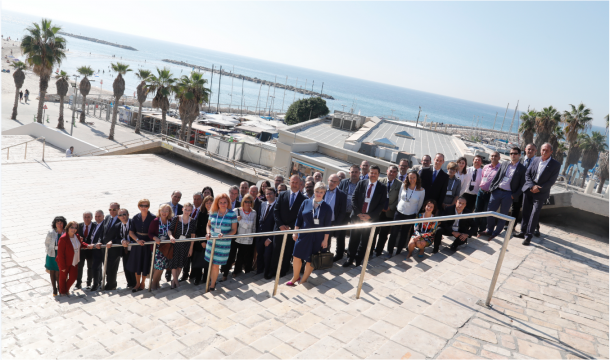 Hydrological and meteorological data in South-East Europe and the Middle East will now be more freely shared as part of a coordinated drive to improve early warnings of a multitude of hazards such as floods and droughts.

The new agreement will boost the development, implementation, and functioning of the sub-regional early warning advisory system. It provides a framework within which additional observational data is exchanged for the purpose of numerical weather prediction data assimilation, hydrological modelling, and verification, within the SEE-MHEWS advisory system. The resulting information, forecasts and advisories are to be shared among all the signatories.

Existing signatories include Bosnia and Herzegovina, Croatia, Greece, Hungary, Israel, Jordan, Montenegro, Republic of Moldova, North Macedonia, Romania, Slovenia and Ukraine. More countries are expected to join the agreement in the near future.

The policy was also signed by Florence Rabier, Director General of European Centre for Medium-Range Weather Forecasts, which will provide support and training to the project countries in the development of Centralized Observational Database and implementation of numerical weather prediction and hydrological modelling activities. Furthermore, the ECMWF's IT environment will be used for the project purposes.

During the last decade the region has suffered from a number of severe weather and climate related disasters, including floods, severe storms, heat and cold waves, and droughts. Heavy rain and floods hit parts of the Balkans in the week the agreement was signed.

In 2014, prolonged heavy rain caused flooding in Croatia, Bosnia and Herzegovina and Serbia resulting 79 people losing their lives as well as severe economic losses. In Skopje, the capital of North Macedonia, 21 people were killed by urban flooding caused by torrential rains in 2016.

Many of the hazards strike across borders and have a major impact on socio-economic development. The sharing of more real-time monitoring data for forecasting and early warning purposes will therefore make a significant contribution to saving lives and livelihoods.

The SEE-MHEWS-A makes outputs of numerical weather prediction models covering South Eastern Europe available to participating countries, so they do not need to run new models themselves.

The SEE-MHEWS was initiated under the auspices of the World Meteorological Organization (WMO), with financial support from the United States Agency for International Development (USAID), this innovative, multi-country program is now being supported by both the World Bank and the Global Facility for Disaster Reduction and Recovery (GFDRR)  and the EU-WB/GFDRR Western Balkans DRM Program (managed by the GFDRR).