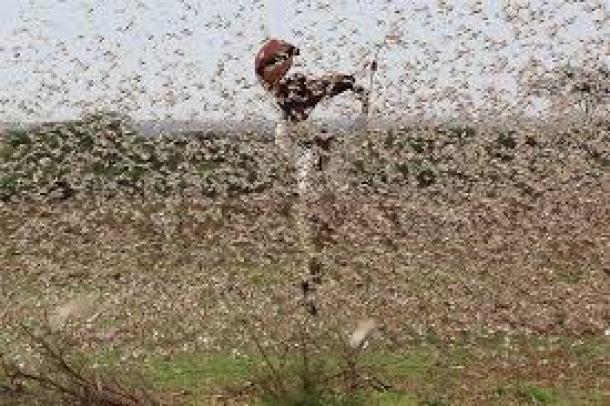 Desert locusts continue to be a serious threat to food security and agriculture in parts of East Africa and India and Pakistan as a result of favourable climate and environmental conditions, according to new updates.

Although desert locusts have been here since biblical times, recent intense outbreaks can be linked to anthropogenic climate change and the increased frequency of extreme weather events, according to correspondence in Nature Climate Change.

“Attribution of a single event to climate change is difficult. However, climatic changes such as increases in temperature and rainfall over desert areas, and the strong winds associated with tropical cyclones, provide a new environment for pest breeding, development and migration. This suggests that global warming played a role in creating the conditions required for the development, outbreak and survival of the locusts,” wrote scientists from the Intergovernmental Authority on Climate Prediction and Applications Centre.

The article cited the role of Indian Ocean warming, intense and unusual tropical cyclones in the region and heavy rainfall and flooding as playing an important role. “The recent locust outbreaks and the role of Indian Ocean warming show that the impact of climate change is not merely the consequences of changes in mean temperature, but also of increases in extreme and unprecedented events.”

ICPAC, which is a WMO regional climate centre, said that locust swarms have been reported in the last 14 days in northern Kenya, eastern and north-eastern Ethiopia. Adult locusts are also in large numbers in the areas where hoppers and bands were spotted in June which is in the trajectories of migrating swarms.

This means a continued increase in locust numbers even with the control efforts. Parts of Sudan have had adult locust reported in more locations.

Ecological conditions (particularly the availability of green vegetation) are most suitable in parts of north-western Kenya, South Sudan, Ethiopia and northern Somalia due favourable rainfall received in the season which enhanced vegetation regrowth.

Crop destruction continue to been reported in Ethiopia and Somalia. Most affected crops have been sorghum and maize crops at vegetative and ripening stages. The risk of significant impact to both crops and rangelands is very high due to the increased likelihood of swarms migrating.

FAO is the lead agency in Desert Locust monitoring and control and runs the Desert Locust Information Service (DLIS).   It uses the WMO Global Observing System as input.

WMO has worked with FAO for many years on the  issue and encourages national meteorological and hydrological services in impacted regions to assist with providing data and forecasts to national control efforts.

In 2016, FAO and WMO jointly produced the "Weather and Desert Locust" publication provides an overview of Desert Locust lifecycle and on weather and climate parameters.

7 things you need to know about locusts