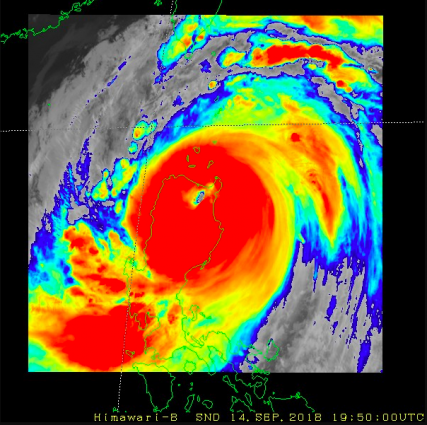 Two of the most dangerous tropical cyclones this year have made landfall, with devastating impacts. Hurricane Florence caused life-threatening storm surge, torrential rainfall and prolonged flooding to the southeast coast of USA. Typhoon Mangkhut in the western North Pacific, the most intense tropical cyclone this year, brought the equivalent of category 5 winds to the northern Philippines before heading to China. Accurate advance warnings and coordinated action with disaster management authorities helped limit the loss of life.

Florence made landfall near Wrightsville Beach, North Carolina at 1115 UTC on 14 September as a category 1 storm with estimated maximum winds of 90 mph (150 km/h), and a minimum central pressure estimate of 958 hPa. Hurricane force winds extended outwards up to 130 km from the center. At its peak on 12 September, Florence had maximum sustained winds of 215 km/h (130 mph), the equivalent of a category 4 on the Saffir-Simpson hurricane wind scale, and a minimum central pressure of 946 hPa, according to the US National Hurricane Center.

"Aircraft and satellite wind data show that Florence is a large hurricane.  Life-threatening storm surge, heavy rainfall, and damaging wind will cover a large area regardless of exactly where the center of Florence moves," said the US National Hurricane Center.

The last major hurricane to impact the Carolinas was Hugo in 1989.

The combination of a dangerous storm surge and the tide caused normally dry areas near the coast to be flooded by rising waters moving inland from the shoreline.  In the worst affected areas, the water had the potential to reach 9-13 feet (2.7 - 4 meters) above ground if peak surge occurs at the time of high tide. 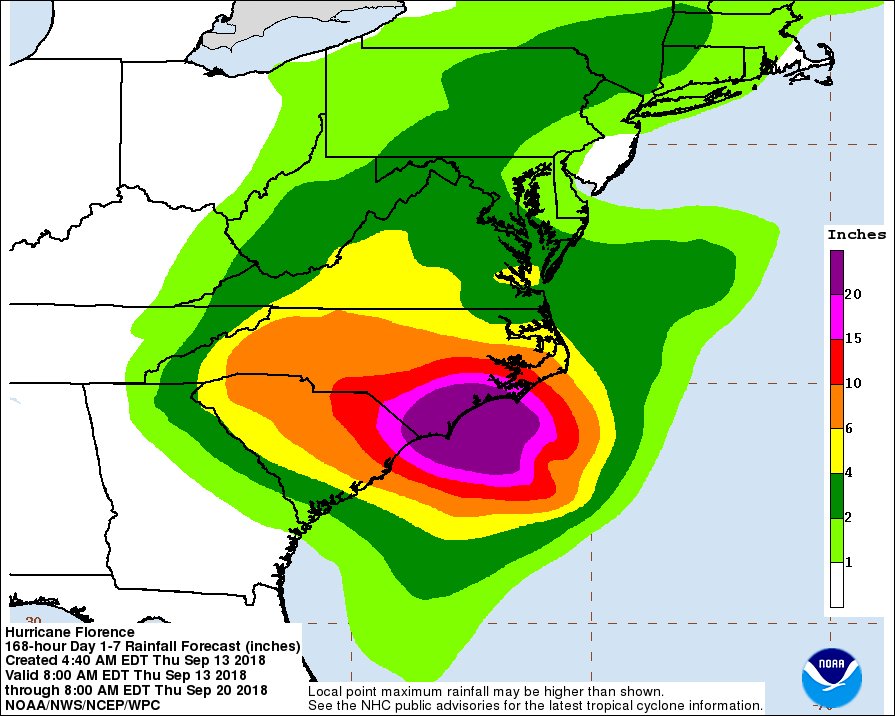 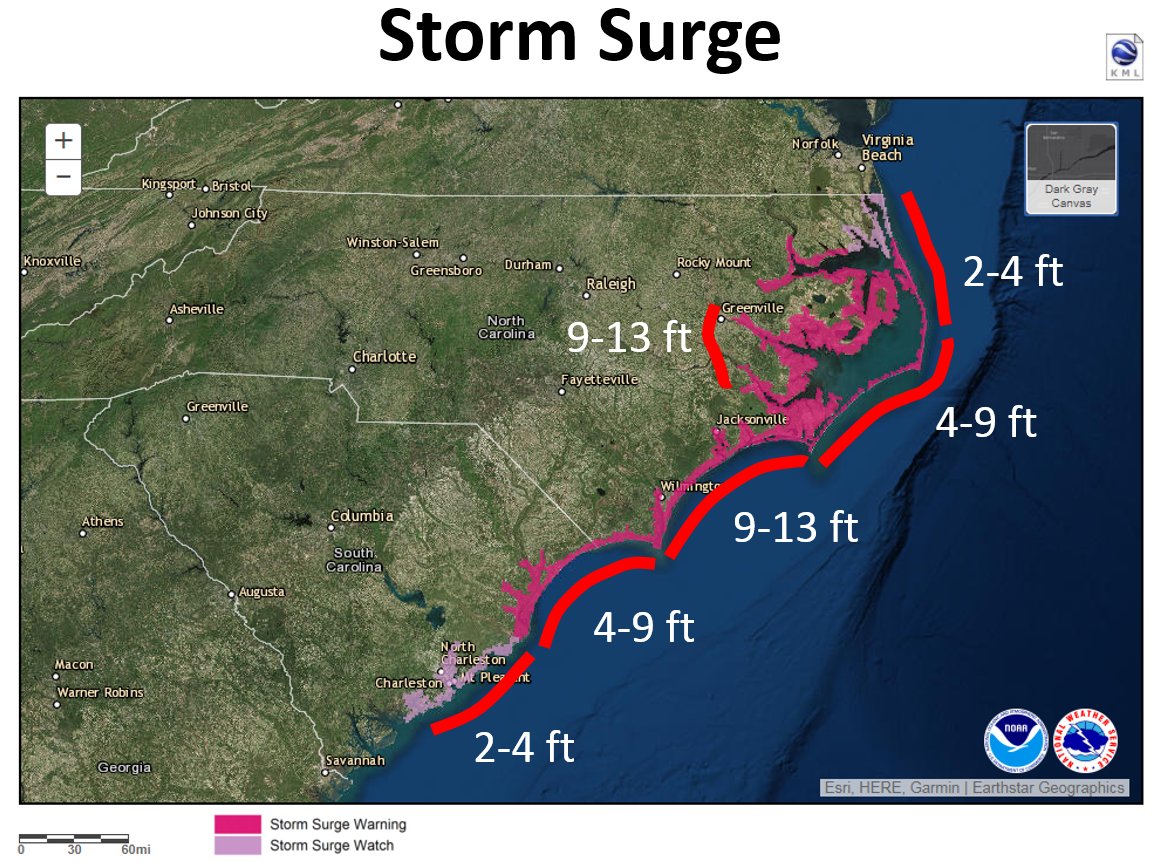 In Wilmington, North Carolina, close to the landfall of Florence, NOAA tidal data shows a sea level rise of around 20cm (0.7 feet) since 1930s, meaning the storm surge will be higher and impacts greater than otherwise.

"Florence is forecast to bring a large area of rainfall of 20-40" (508 mm to 1016 mm)   to parts of North Carolina and South Carolina. We cannot overstate the threat of catastrophic flooding this storm will bring," tweeted the US National Weather Service.

As predicted by weather models, Florence stalled, spinning over the Carolinas for several days, thus exacerbating the rainfall and flooding. More than 30 inches (762 mm) fell by September 16, and Wilmington and other areas were cut off by the flood waters.

It was a similar scenario with Hurricane Harvey last year. An exceptional 1,539 mm of rain fell from 25 August to 1 September at a rain guage near Nederland, Texas, the largest amount of rain ever recorded in a torpical cyclone in the USA. It caused an estimated US$125 billion in damages. 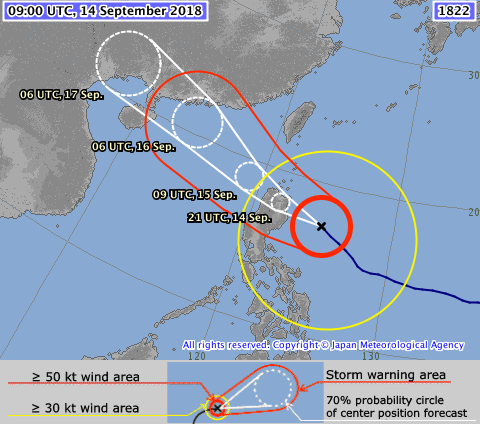 In terms of the strength, Typhoon Mangkhut was the strongest tropical cyclone of the year. Just before landfall it had a central pressure of 905 hPa, with winds exceeding 90 kmH extending 220 km outwards from the centre.

The Philippines national meteorological service PAGASA said the typhoon, known locally as "Ompong," made landfall at 0140 am local time in the northern Cagayan province. It hit the Philippines  as a category 5 equivalent hurricane, with winds of 210 km/h, gusting to 285 km/h, causing widespread devastation.

PAGASA forecast associated rainfall, with accumulated totals up to 200 to 350 mm, waves from 3 to 12 meters (close to Mangkhut’s centre) and dangerous storm surge of up to 6 meters, triggering many landslides.

There were strong winds and heavy rain in the capital Manila, 600 kms away.

Mangkhut is one of the strongest typhoons to hit the Philippines since Haiyan caused devastation in November 2013, killing more than 7,000 people. PAGASA issued regularly updated warnings ahead of Mangkhut to alert people to the dangers, prompting the evacuation of thousands and helping to limit the number of casualties.

Mangkhut then tracked towards the Chinese southeast coast between the islands of Hainan and south of Hong Kong. It made landfall in Taishan coast of Jiangmen City, Guangdong Province, with a minimum air pressure of 955 hPa. Top-level typhoon warnings were issued by the China Meteorological Administration for the mainland and in Hong Kong and Macau. 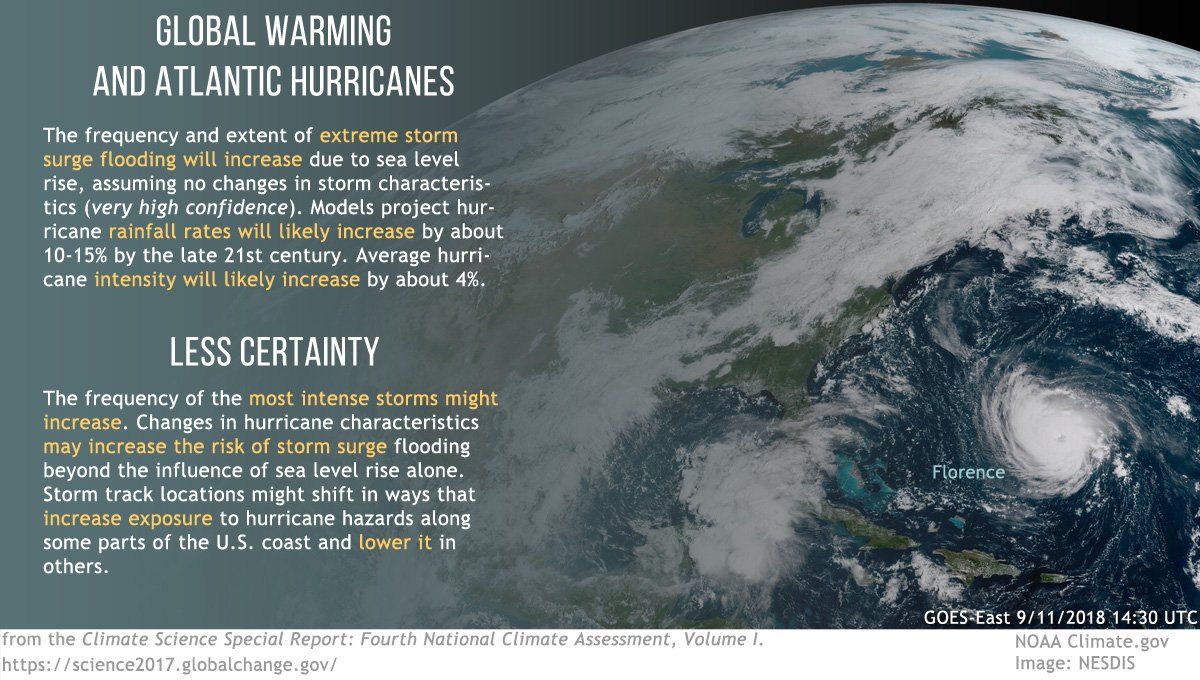 "The Intergovernmental Panel on Climate Change Fifth Assessment Report presents a strong body of scientific evidence that most of the global warming observed over the past half century is very likely due to human-caused greenhouse gas emissions.   But what does this change mean for hurricane activity?  Here, we address these questions, starting with those conclusions where we have relatively more confidence: