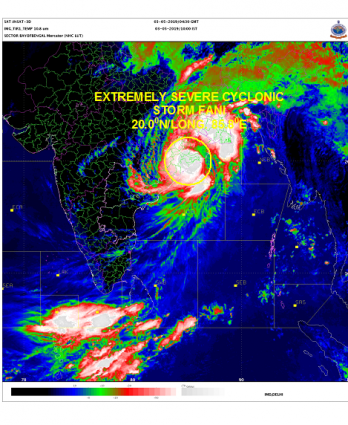 Extremely severe cyclonic storm Fani made landfall close to Puri in Odisha on 3 May, with maximum sustained wind speeds of 180-190 km/h. It tracked North-North Eastwards and weakened as it moves towards West Bengal and then on to Bangladesh, according to the Indian Meteorological Department. Accurate advance forecasts and a huge, well-coordinated disaster risk reduction campaign were credited with keeping the death toll to a minimum.

Disaster management authorities in India launched a massive operation in preparation for the extremely severe cyclonic storm, evacuating a reported one million people, advising people on what to do and issuing warnings. of the cyclone. Several thousand cyclone centres were readied. Schools and airports closed. Bangladesh also implemented contingency plans on the basis of the weather forecasts from the Bangladesh Meteorological Department.

Some of the deadliest tropical cyclones on record have occurred in the Bay of Bengal. Super Cyclonic Storm BOB06 caused more than 10,000 fatalities in October 1999. Thanks 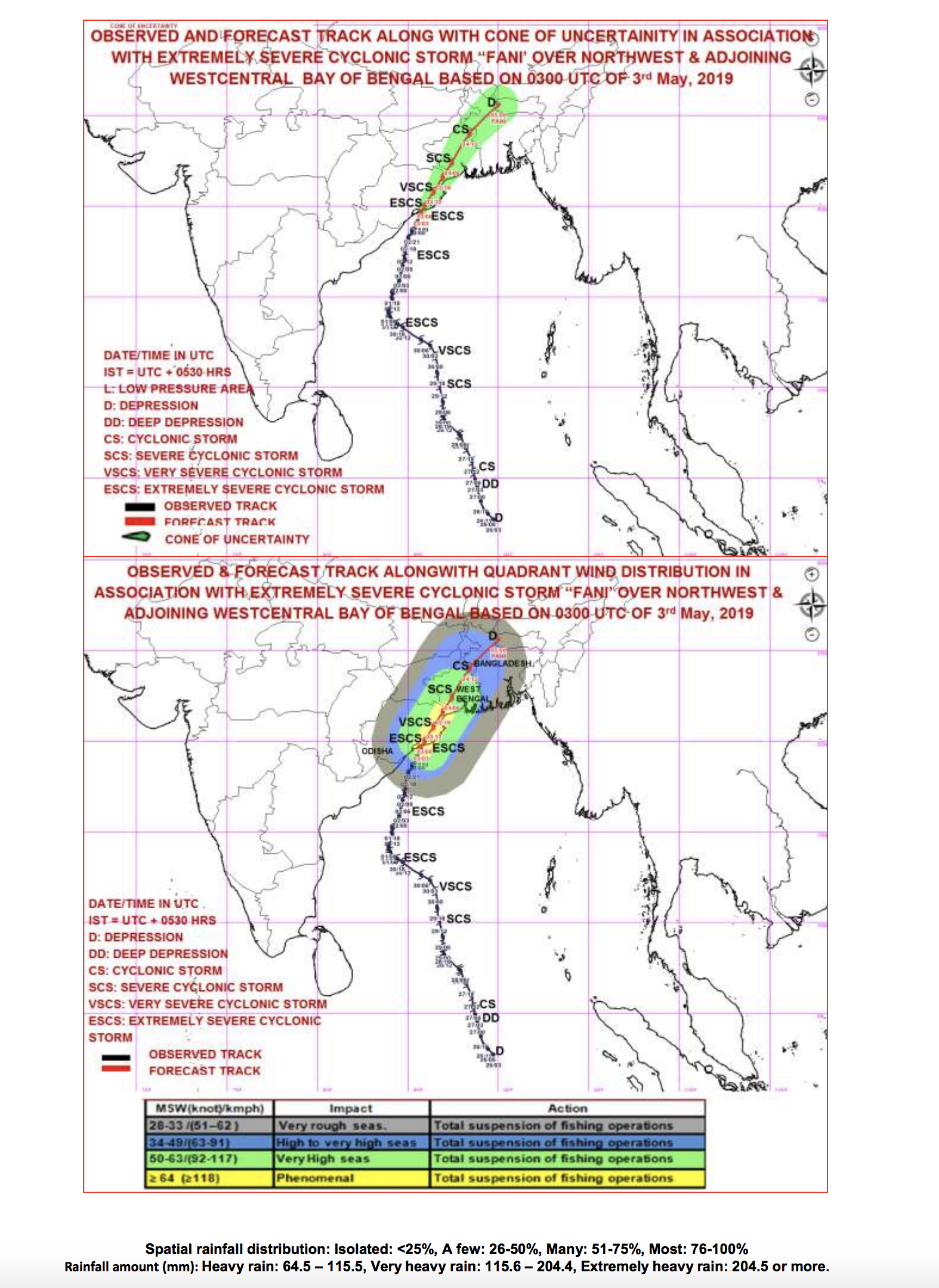 to improved forecasts and warnings and better coordinated disaster management, there were a reported 45 fatalities from Cyclone Phailin – an equally intense cyclone which hit in 2013. Fani was less intense at landfall than the 1999 cyclone or Phailin, but is still one of the most intense storms to make landfall in Odisha for 20 years.

Initial reports indicated that the death toll in India was less than 50, even though the storm hit an extremely densely populated area.

Indian Prime Minister  Shri Narendra Modi credited the role played by technology including satellite imagery and advanced weather forecasting techniques in minimising loss of life. He said that the combination of technological capabilities and human interface has enabled last mile connectivity with the affected.

Fani (pronounced as Foni) reached a peak of the equivalent of a Category 4 on the Saffir Simpson scale, with maximum sustained wind speeds of 190 – 200 km/h, gusting to 220 km/h on 2 May, according to the India Meteorological Department.

After landfall, it weakened gradually and was forecast to enter into West Bengal as a Severe Cyclonic Storm with the wind speed of 90- 100 km/h gusting to 115 km/h. It is very likely to move further north-northeastwards and emerge into Bangladesh on 4 April as a cyclonic storm with a wind speed 60-70 Km/h.

The India Meteorological Department issued warnings for extremely heavy rainfall  for affected areas in Odisha, North Andra Pradesh and West Bengal and other states. Sea conditions are “phenomenal” over the west-central Bay of Bengal and off north Andhra Pradesh coasts. Fishermen were advised not to venture out.

A storm surge of about 1.5 meter height above astronomical tide was forecast to inundate low lying areas of the some districts in Odisha at the time of landfall.

The India Meteorological Department warned of extensive damage to housing, communication, transport infrastructure and agriculture. It advised extensive evacuation from the most vulnerable coastal areas, a total suspension of fishing operations, diversion or suspension of rail and road traffic.

The Bangladesh Meteorological Department said the storm would reach the southwestern part of Bangladesh during the night of 3-4 May. Danger signals were issued for major ports en route.

It warned that coastal districts from Satkhira to Chattogram are likely to experience wind speeds of up to 90-110 km/h in gusts and squalls with very heavy rainfall. They have also warned these coastal regions and their islands and chars are likely to be inundated by a 4-5 foot 1.2 to 1.5 meter) storm surge above normal astronomical tides.  Conditions are not expected to be as severe in the Cox's Bazar region, although heavy rainfall and strong winds will affect the UN refugee camps there.