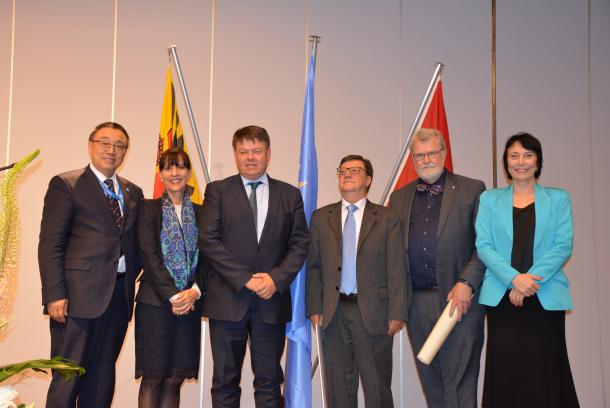 The World Meteorological Organization has presented its top prize to Divino Moura of Brazil for his outstanding work in meteorology and climatology and his leadership in science.

Mr Moura, a leading expert in climatology, weather prediction, the El Nino Southern Oscillation and ocean-atmosphere interactions, is currently head of the Center for Weather Prediction and Climate Studies, a branch of the Brazilian Space Research Institute.

“Divino Moura is an outstanding scientist and is most deserving of our highest award. For more than forty years, he has been engaged in meteorology, atmospheric and climate sciences, and climate change,” said WMO President David Grimes.

Mr Moura was recognized for his “scientific contribution towards a better understanding of the role of the Atlantic and El Niño in the regional and global climate and establishing a framework for climate–society linkages and climate services. for dedicated research work and forming a cadre of scientists aiming at modernizing Brazilian meteorology.” 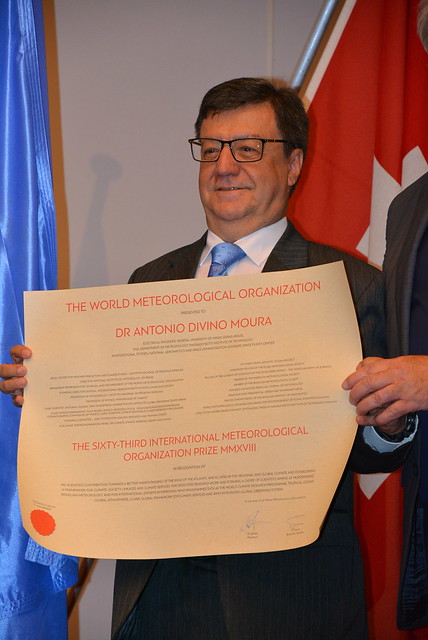 “The IMO Prize is not only prestigious but also truly unique. It symbolizes the advancements that are being made in meteorology, and it is also the memory of our Organization,” said WMO Secretary-General Petteri Taalas. “It is our Nobel Prize.”

The prize has three elements: a 14-carat gold medal, a parchment scroll bearing the award citation and a symbolic financial award of 10,000 Swiss francs.

Mr Moura’s contributions to the WMO are numerous and span decades. He was Permanent Representative of Brazil with WMO from 2011 to 2016 and was WMO Third Vice-President between 2007 and 2011

At the award ceremony, held during the World Meteorological Congress, Mr Moura said long career originated with his research into why the Amazon – the world’s biggest tropical rainforest was situated right next to an arid region of Brazil. “That is an anomaly,” he said.

His scientific lecture traced the early development of El Niño/La Niña forecasts and his efforts to inform Brazilian and international policy-makers about this major climate phenomenon, which was poorly understood in the 1980s.

He also explained the development of health applications from climatology and the coupling of rainfall and temperature outlooks with mosquito models in Brazil.

“Malaria and dengue fever are real problems in Brazil and forecasts can help in prevention and management. The climate community provides a public service in doing that. Our predictions help people to improve their living conditions.”

Mr Moura was the founding Director-General of the International Research Institute for Climate and Society at Columbia University in New York from 1996 to 2002, which has the mission to enhance society’s capability to understand, anticipate and manage the impacts of climate on society, including through the regular issuing of El Niño/La Niña forecasts.

Mr Moura was involved with the PIRATA (Pilot Research Array in the Tropical Atlantic), designed to study ocean-atmosphere interactions in the tropical Atlantic. Building on its success, this multinational project has been running for the last 20 years.

He said his career had required patience and partnerships.

“You go from experimental to operational. There is no magic formula. You have to experience it to see how the transition from something theoretical to something operational. It has to involve not just scientists and academia but governments because they are the decision makers,” he said.