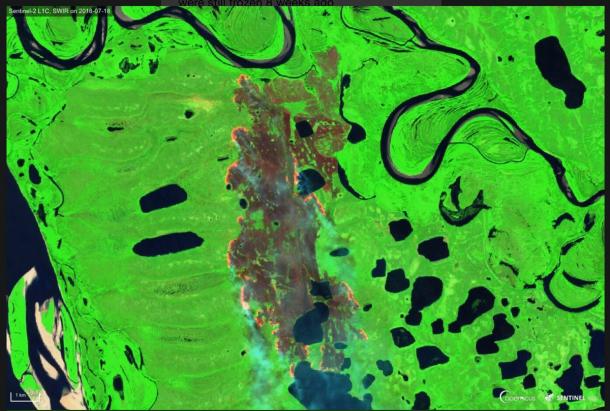 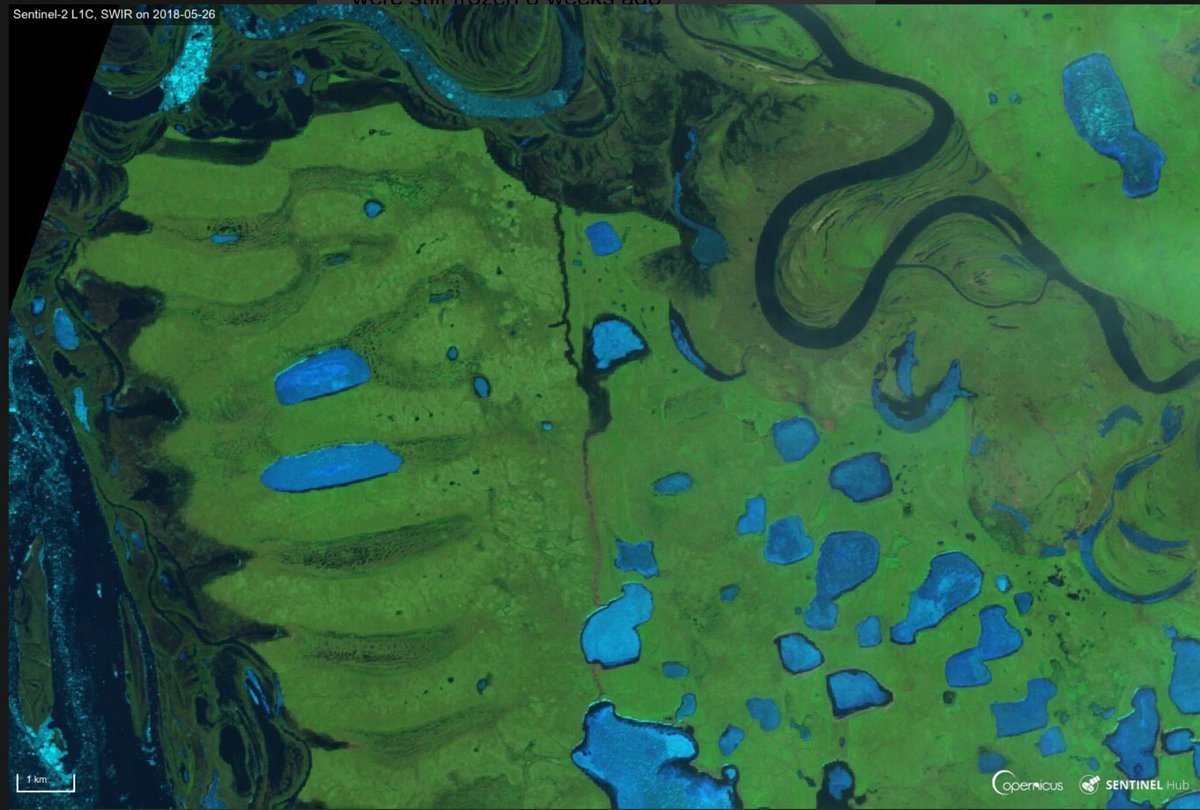 The unusually hot and dry summer in parts of the northern hemisphere has turned fields and forests into fuel for fires which are raging from the Arctic to the Mediterranean and West Coast of North America. These wildfires have caused dozens of fatalities and are devastating large regions, with far-reaching impacts for the environment, ecosystems, human health and the climate.

The wildfires are notable because they are happening in some places such as Scandinavia which are not accustomed to them. Advances in satellite technology has made it possible to monitor wildfire activity better than in the past.

In addition to the direct threat from burning, wildfires also release pollutants detrimental for human health and ecosystems. Close to the fires, smoke is a health risk because it contains a mixture of hazardous gases and small particles that can irritate the eyes and respiratory system. The effects of smoke exposure and inhalation range from eye and respiratory tract irritation to more serious disorders, including reduced lung function, bronchitis, exacerbated asthma and premature death. Exposure to particulate matter is the main public health threat from short-term exposure to wildfire smoke, according to the World Health Organization .

Vegetation fires release large amounts of particulate matter and toxic gases including carbon monoxide, nitrogen oxides, and non-methane organic compounds into the atmosphere which are part of the extensive measurements performed by many stations of the Global Atmosphere Watch (GAW) Programme. These measurements are essential for forecasts, research on atmospheric composition and to develop warning systems.

The northern part of the world is warming faster than the planet as a whole. That heat is drying out forests and making them more susceptible to burn. A recent study found Earth’s boreal forests are now burning at a rate unseen in at least 10,000 years.

The Intergovernmental Panel on Climate Change, in its Fifth Assessment Report, said that the frequency and extent of wildfires in southern Europe increased significantly after the 1970s as a result of fuel accumulation, climate change and extreme weather events. However, for the Mediterranean region as a whole, the total burned area has decreased since 1985 and the number of wildfires decreased from 2000 to 2009. Future wildfire risk is projected to increase in Southern Europe.

Wildfires also release carbon dioxide into the atmosphere, contributing to global warming. For instance, fires burned around 3 million hectares of land in Indonesia during the 2015 dry season, which was longer and drier than average because of El Niño. It was estimated that the fires burning in September and October 2015 until the onset of the rainy season released about 11.3 teragrammes (trillion grams) of CO2 per day. For comparison, the daily release of CO2 from fossil fuel burning in the European Union is 8.9 teragrammes.

The 2014 megafires in Canada scorched more than 7 million acres of forest, releasing more than 103 million tonnes of carbon into the atmosphere – half as much as all the plants and trees in Canada typicall absorb in an entire year, according to a new study by NASA.

The pristine Arctic environment is particularly sensitive/fragile and warming faster than most other regions. Particles of smoke can land on snow and ice, causing the ice to absorb sunlight that it would otherwise reflect, and thereby accelerating the warming in the Arctic. Fires in the Arctic also increase the risk of further permafrost thawing that releases methane, which is also a greenhouse gas.

The incidence of wildfires is greatly influenced by natural variability in our climate, including precipitation and wind, as well as other factors not related to the climate.

Dry vegetation and high temperatures, however,  are only one component that determine the spreading of fires. Another key player in spreading the fire are wind direction and wind speed. In particular in mountainous terrain, very localized wind systems may cause the fire to spread into a specific valley or even jump over to neighboured mountains. The localized winds are further altered by the fire itself, since a  region under fire is heating up, compared to the surroundings. This leads to a difference in temperature, the overarching reason for the exchange of air, in other words, wind.

The prediction of the wind conditions and how they are altered by fire thus requires a model that is able to properly represent the orography and vegetation of the affected region, and  is fed with detailed knowledge on wind conditions.  This states a problem, since the wind conditions near a fire affect a rather small region and might thus not be recognized by the weather station that is closest by. All of this makes predicting the further behaviour and spreading of the fire very challenging.

Wildfires are one of the five hazards that is in the scope of WMO’s High-Impact Weather Project (HIWeather). This research project works, on the one hand, on improving our capabilities to predict the propagation and impact of active fires, as well as fire risk. On the other hand, HIWeather seeks to improve the early warning information that can  provide emergency responses, and the communication and usability thereof. The delivery of such information is crucial for decisions on evacuations and fire fighting.

A glance at some wildfires in extra-tropical areas

Fires have already affected an estimated area of more than 90,000 hectares in Siberia and the Far East of the Russian Federation. Lakes in Yakutia were still frozen at the end of May. But, ice has been replaced by fire after persistent heat over Siberia. The European Union’s CAMS estimated the burn scar at about 60 km2.

During the first two weeks of July, smoke from fires in the Sakha Republic of the Russian Federation  travelled 9500 km – across the Arctic Ocean to Alaska and North-West Canada and eventually the west coast of Greenland. This long-range movement of smoke was predicted five days in advance by the CAMS. See here: https://atmosphere.copernicus.eu/news-and-media/news/cams-monitors-long-...

It’s the second time in two months that major wildfires have lit up northeast Russia. The latest round is clearly visible on satellite images, which show smoke spreading over an area roughly 2011 kilometers wide.

Smoke from wildfires over 4,000 miles away in Siberia reached parts of the northeastern United States this week.

In one of the worst fire outbreaks Sweden has suffered,  more than 50 fires have ignited throughout the country. The summer in Sweden has so far been exceptionally hot and precipitation unusually low, with parts of southern Sweden experiencing their driest summer on record. The Kvikkjokk-Arrenjarka weather station in the far north, on the same latitude as southern Greenland and northern Alaska, broke its record with a reading of 32.5 degrees.

The average annual area burned by fire over the past 20 years in Sweden has been roughly 1,900 hectares. In 2014, a single forest fire burned 13,800 hectares and it was spoken of as possibly the worst the country had experienced since the 19th century. The 2018 fires has surpassed 30,000 hectares and triggered European Union emergency response mechanisms.

Deadly fires fanned by strong winds killed dozens of people near Athens on the night of 24 July in one of Greece’s worst tragedies for years. Temperatures on 23 July reached about 38°C and there were strong west winds.

The US National Interagency Fire Center said that the US national preparedness level as of 27 July was 5, on a scale from 1 to 5. It said that on 29 July, 90 large fires have burned nearly one million acres in 14 states in the USA. Large fire activity is reported in every geographic area, except Eastern Area, which is very unusual for July. Hot and dry weather conditions in several states caused extreme fire behavior on large fires in California, Nevada, Oregon and Idaho. Residents in many towns across the West have been evacuated from their homes. The US National Weather Service warned on 30 July that temperatures in excess of 100°F (38°C) and dry humidity would exacerbate the ongoing fire situation in California.

Details on US wildfires at the Incident Information System.

Analysing  fire records over 1984–2011 researchers found increasing trends in the number of large fires and/or total large fire area per year over the western U.S. Trends were most significant for southern and mountain ecoregions, coinciding with trends toward increased drought severity. For all ecoregions combined, the number of large fires increased at a rate of seven fires per year, while total fire area increased at a rate of 355 km2 per year.

Rising average temperatures have led to western forests drying out, increasing the risk of fires. There are 129 million dead trees in California alone. Across California, the total number of fires is trending downward, but the size of fires is going up.

Climate change is not just increasing the likelihood of wildfires in some areas of the country; it’s also erasing decades of air pollution gains in those same regions, according to a study published in the Proceedings of the National Academy of Sciences. It shows that wildfires are causing a spike in air pollution across the West.

To better understand its chemistry and development over time scientists fly into hazy smoke from Western wildfires this summer. The WE-CAN team consists of scientists from five universities and the National Center for Atmospheric Research. Their goal is a comprehensive, systematic understanding of the chemistry of wildfire smoke, focused on three main issues: increasing the understanding of the amount and types of reactive nitrogen in smoke plumes; quantifying and understanding emissions and the evolution of fine particulate matter and optical properties of smoke; and identifying how smoke plume particles affect the behaviour and formation of liquid and ice clouds.

Canada is also suffering from wildfires. As of 24 July, there were 55 active wildfires across northeastern Ontario, and 77 in the northwest. "Assistance from across Canada and as far away as Mexico have joined forest fire fighting efforts in the northeast region," said the Ministry of Natural Resources and Forestry.

Measurements from GAW stations are used for verification of the model employed by the CAMS for global forecasts and analyses of emissions from wildfires and biomass burning. The WMO Southeast Asia Regional Centre and the Meteorological Service Singapore have started the implementation of a regional Vegetation Fire and Smoke Pollution Warning and Advisory System (VFSP-WAS, see here). WMO and partners developed a concept note for VFSP-WAS containing the expert recommendations resulting from discussions at an international workshop on Forecasting Emissions from Vegetation Fires and their Impacts on Human Health and Security in South-East Asia that is available here. Arising from the keen interest of WMO Members in several impacted regions, the note provides guidance for addressing the issues of vegetation fire and smoke pollution. It also proposes the establishment of a Vegetation Fire and Smoke Pollution Warning and Advisory System (VFSP-WAS) and to support the potential foundation of regional centers on the topic.