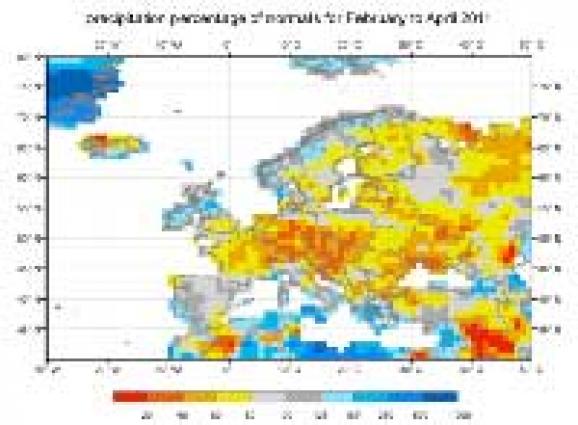 A long-lasting dry period persists over large parts of Europe since January 2011. According to data of the Global Precipitation Climatology Centre (GPCC), especially the months February to April 2011 had a considerable rain deficit over large parts of Europe. The 3-month totals over this period ranged between 40 and 80% of the long-term mean 1951-2000 over large areas (see figure below), in many parts of central Europe even below 40%.

The United Kingdom had extremely dry conditions in March and April especially in its southeastern parts and experienced its driest March since 1953. The other parts of western and central Europe all had a dry February, March and April. 2011 was up to now one of the driest 10 years in nearly whole Switzerland since 1864.  April 2011 was one of the 10 driest April months in Germany since 1881, in continuation of similarly dry April months in 2007, 2009 and 2010. Also the preceding winter 2010/11 was very dry at least in western Europe, causing a very low soil moisture during March and April.>> More details