Drought set to worsen in parts of Greater Horn of Africa 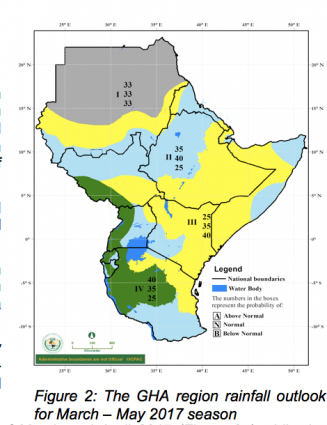 Drought set to worsen in parts of Greater Horn of Africa

“What makes the current drought alarming in the Equatorial Greater Horn of Africa region is that it follows two consecutive poor rainfall seasons in 2016, and the likelihood of depressed rainfall persisting into the March-May 2017 rainfall season remains high,” said the Intergovernmental Authority on Development’s Climate Prediction and Applications Center (ICPAC), which convened the regional forum.

“The situation will be worse in countries already experiencing drought, including Somalia, Kenya, Ethiopia, parts of Uganda, South Sudan and parts of Tanzania. Many parts of the region will experience serious water stress,” it said.

With the exception of Sudan and Rwanda, the October - December 2016 rains failed in most countries in region. Contributing factors include the weak La Niña, which has just ended, and reduced moisture influx due to the cooling of the ocean water in the east African coast.

March to May is the main cropping season for many parts of the Greater Horn of Africa. The seasonal outlook is therefore of great importance to inform decision-making in climate sensitive sectors. The forum, attended by meteorological and climate experts and users from agriculture and food security, livestock, water resources, disaster risk management, Non- Governmental Organizations and development partner, took place in Addis Ababa from 6 to 7 February 2017. 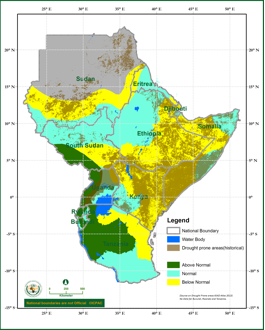 Central and western Tanzania, much of Burundi and Rwanda, western Uganda and south-western parts of South Sudan have increased probability for above to near normal rainfall.

“The forecasted performance of the March-April-May 2017 rainfall is expected to have mixed implications for food security, livestock production and productivity, water, health in different parts of the region,” it said.

“The climate outlook is likely to lead to both drought and flood related disasters in different parts of the region. Some regions that are predicted to receive depressed rainfall during the March-April-May 2017 rainfall season also experienced poor rainfall performance during the October-November-December 2016 rainfall season which has pushed areas like Somalia, parts of Kenya, Uganda and Southern Ethiopia into serious food insecurity. Poor performance of the March-April May rainfall will only exacerbate the already deteriorating situation in these countries,” it said.

“On the other hand, there are risks of flooding in some parts of Tanzania; flooding and landslides in parts of Burundi and Rwanda, western Uganda and south-western parts of South Sudan due to the increased probability for above to near normal rainfall.”