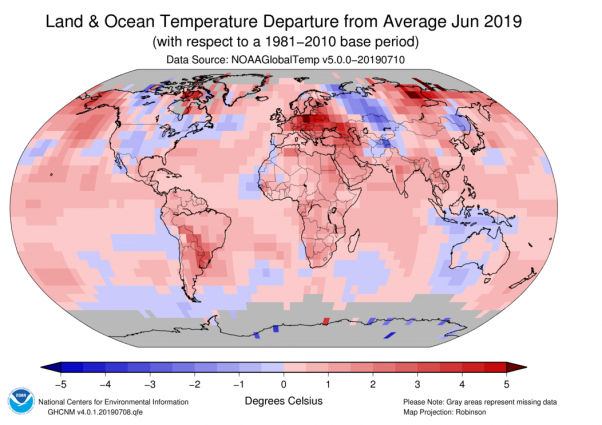 The US National Oceanic and Atmospheric Administration (NOAA) has confirmed that the Earth just had the warmest June on record, ahead of June 2016. This is in line with the other major datasets from NASA, the European Centre for Medium Range Weather Forecast Copernicus Climate Change Service and Japan Meteorological Agency.

Both land and sea surface temperatures were the highest on record.

June 2019 also marks the 43rd consecutive June and the 414th consecutive month with temperatures, at least nominally, above the 20th century average, according to NOAA.

It was Europe’s hottest June on record. Towards the end of the month, the western and central parts of the continent experienced a short but record-breaking heatwave, with daily average temperatures up to 10°C higher than normal. Temperatures were markedly above average over Baffin Island, northern Siberia (where wildfires were prevalent) and some parts of Antarctica. Other regions with temperatures substantially above normal include Greenland, Alaska and parts of South America, Africa and Asia. India and Pakistan experienced a severe heatwave in the early part of the month, before the onset of the monsoon. 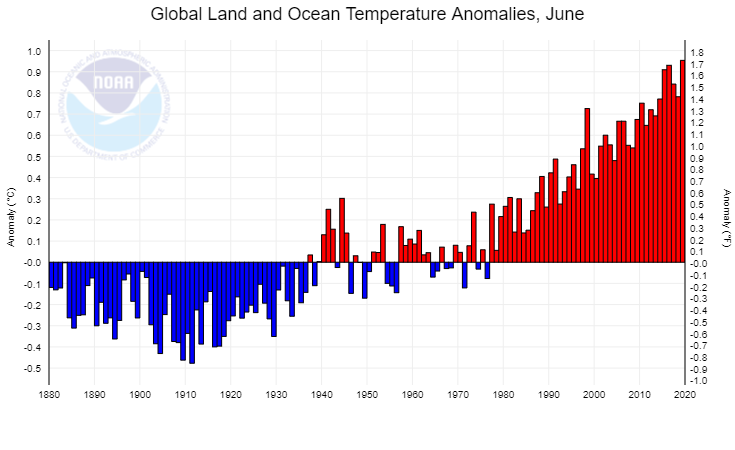 Temperatures are only part of the story. June saw the second smallest Arctic sea ice extent for June in the 41-year record, behind the record low set in June 2016, according to an analysis by the National Snow and Ice Data Center using data from NOAA and NASA. Antarctic sea ice was the lowest on record.

The ECMWF Copernicus Climate Change Service’s Hydrological Bulletin for June showed that a large region stretching from southwestern Europe, across central Europe into Ukraine and southern Russia and northern Siberia had drier than average conditions, due both to less precipitation than normal and much above average temperatures. Most of southeastern Europe, the Balkans and Turkey experienced wetter than average conditions. In the southern hemisphere, Australia and southern Africa saw continued very dry conditions.

The year-to-date temperature across global land and ocean surfaces tied with June 2017 as the second highest for January-June in the 140-year record. Only January-June 2016 was warmer, according to NOAA.

Record-warm January-June temperatures were present across central South America, the southern half of Africa, New Zealand and its surrounding ocean, as well as parts of Alaska, western Canada, Mexico, the Bering Sea, the Atlantic Ocean, Madagascar and surrounding Indian Ocean, and across parts of eastern Asia. No land or ocean areas had record-cold temperatures during January-June 2019.

WMO will present a report on the state of the climate to the U.N. Climate Action Summit in New York 23 September. This will be based on datasets from NOAA, NASA’s Goddard Institute for Space Studies, and the United Kingdom’s Met Office Hadley Centre and the University of East Anglia’s Climatic Research Unit in the United Kingdom, as well as reanalysis datasets from the European Centre for Medium Range Weather Forecasts and its Copernicus Climate Change Service, and the Japan Meteorological Agency.