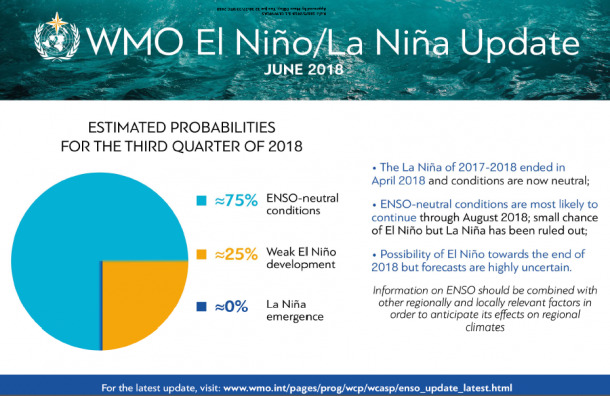 Sea surface temperatures in the east-central tropical Pacific as well as most of the overlying atmospheric indicators suggest that ENSO-neutral conditions are prevailing; that is, neither El Niño nor La Niña. Most dynamical and statistical forecast models suggest a continuation of the neutral conditions into the third quarter of 2018. Many models further indicate this period to be marked by a gradual warming of the tropical Pacific, eventually reaching a possible weak El Niño level by the fourth quarter of the year. However, such long-lead ENSO forecasts have substantial uncertainty, mainly related to the fact that forecasts going through the March-June period have lower confidence than those made in the second half of the year. National Meteorological and Hydrological Services will continue to closely monitor changes in the state of ENSO over the coming months.

Since late April 2018, sea surface temperatures across much of the east-central tropical Pacific returned to neutral levels following the La Niña of 2017-18. Most of the main atmospheric indicators have also returned to neutral, including the trade winds and the patterns of sea level pressure. The distribution of cloudiness and precipitation, however, suggests a lingering pattern of the La Niña that recently ended, with below-average cloudiness in the central tropical Pacific and near to above-average cloudiness and rainfall in the vicinity of Indonesia.

The temperature of the waters at depth, from the central Pacific eastward and extending several hundred meters below the surface, has become moderately above average since early April 2018. The waters at depth often provide an indication of the coming ENSO conditions at the surface, and together with the return of most atmospheric indices to neutral levels, suggest that the currently neutral sea surface temperatures may warm during the third and fourth quarters of 2018, with the possibility of reaching El Niño levels by the fourth quarter. 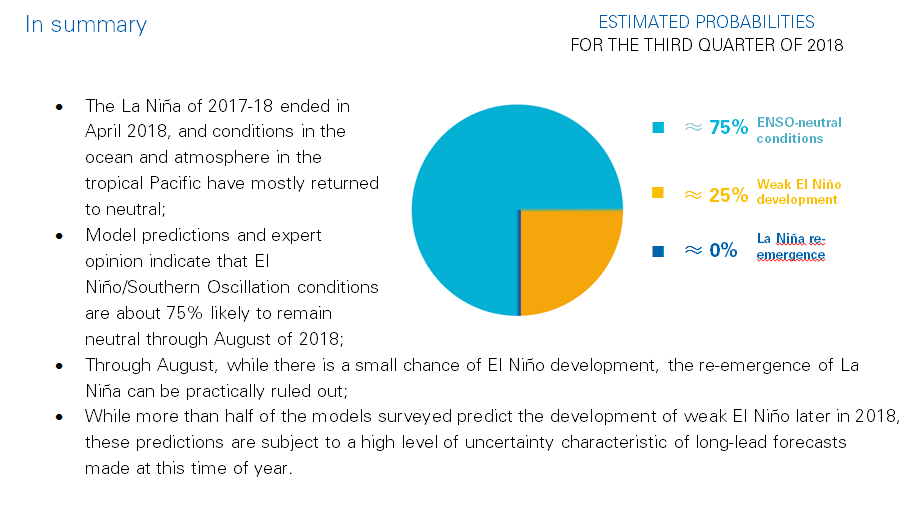 Most models surveyed predict that sea surface temperatures in the east-central tropical Pacific Ocean will remain neutral (between 0.5 degrees Celsius below average and 0.5 degrees above average) over the coming few months (June to August). More than half of the models predict a warming to weak El Niño levels beginning late in the third or the fourth quarter. However, uncertainty about the ENSO condition beyond the middle of the year is still significant, as forecasts whose lead time passes through the March-June period are known to have relatively lower confidence than forecasts not traversing that period. Based on the model predictions and expert assessment, the chance of neutral conditions continuing through August of 2018 is about 75%. While there is a small chance of El Niño development, re-emergence of La Niña can be practically ruled out. For September through the end of the year, the probability for the development of El Niño is slightly above average, the likelihood for El Niño during the fourth quarter being about 50% at this time. If the models continue with the same predictions for the next two months, confidence concerning the likelihood of significant El Niño development will increase.

It is important to note that El Niño and La Niña are not the only factors that drive global climate patterns, and that the strength of ENSO does not automatically correspond to the strength of its effects.  At the regional level, seasonal outlooks need to assess the relative effects of both the El Niño/Southern Oscillation state and other locally relevant climate drivers. For example, sea surface temperatures of the Indian Ocean, the southeastern Pacific Ocean and the Tropical Atlantic Ocean are also known to influence the climate in the adjacent land areas. Regionally and locally applicable information is available via regional and national seasonal climate outlooks, such as those produced by WMO Regional Climate Centres (RCCs), Regional Climate Outlook Forums (RCOFs) and National Meteorological and Hydrological Services (NMHSs).

More information on the Update and related aspects