European climate in 2016 marked by warm nights and major floods 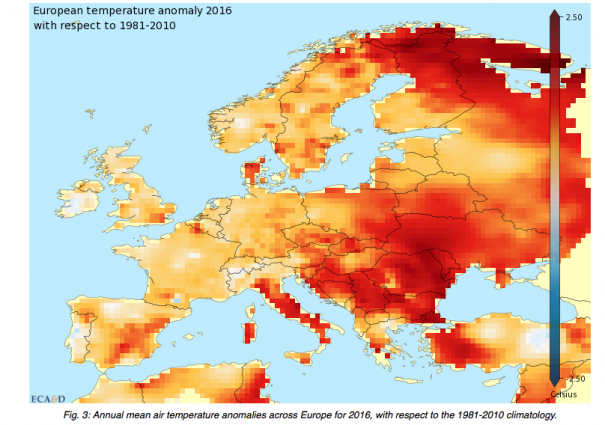 European climate in 2016 marked by warm nights and major floods

A new analysis of European air temperature data from January through December 2016 confirms that 2016 is on track to be the region’s fourth warmest year on record. This follows two consecutive years, 2014 and 2015, which each broke regional records for high average air temperatures.

Based on initial estimates, the January-December annual mean air temperature for Europe is forecast to be 11.0°C, or 0.70°C above the 1981-2010 long-term mean. This compares with the assessment of the Provisional WMO Statement on the Status of the Global Climate in 2016, which estimated that the global average air temperature for 2016 will be about 1.2°C above pre-industrial era, making it the warmest year globally since the start of modern record keeping in the mid-1800s.

Available in the current Climate Indicator Bulletin, the analysis was conducted on the basis of a dataset compiled ject by a consortium of national weather services and leading research institutes. It was coordinated by the Royal Netherlands Meteorological Institute (KNMI) and is an output of the WMO Regional Climate Center - Network for Europe (WMO Regional Association VI). Many high-resolution graphics are available on the website.

Regarding annual precipitation, the Balkan peninsula, Portugal, northeastern Italy and parts of eastern Europe were wetter than usual. Northwestern Europe was drier than usual in 2016, with drought continuing in the eastern Mediterranean.

The year’s most significant extreme event occurred from 26 May to 4 June, when large amounts of rain fell over southeastern/central France, Belgium, the southern part of the Netherlands and southern Germany. This was associated with a slow-moving low pressure system centered over Germany, which drew a flow of moist air from the North Sea onto the continent. Across northeastern France the heavy rainfall followed a wet spring season, causing severe flooding in many river basins across the region. In Paris, the river Seine peaked on 3 June at a height greater than 6 m – a height not seen since 1982. Southern Germany also experienced flash flooding, particularly in parts of Baden-Württemberg and Bavaria, where the station Hohenpeißenberg saw 52.5 mm in only one hour on 29 May 2016.

WMO is establishing Regional Climate Centers (RCCs) and RCC-Networks to generate and deliver more regionally-focused, high-resolution data and products as well as training and capacity building. The European RCC-Network engages the region’s 50 National Meteorological and Hydrological Services (NMHSs) and is currently coordinated by the German National Meteorological Service (DWD). The Climate Indicator Bulletin is implemented through the RCC-Network’s “node” on climate data services, which is coordinated by the Royal Netherlands Meteorological Institute (KNMI).