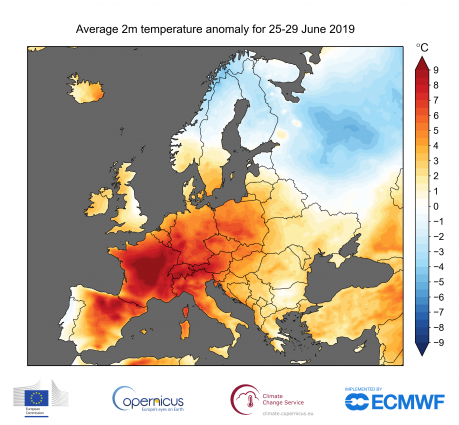 An unusually early and exceptionally intense heatwave has set new temperature records in Europe and ensuring that the month of June was the hottest on record for the continent, with the average temperature of 2° Celsius above normal. The high temperatures pose a major threat to people's health, agriculture and the environment, but initial reports indicated that heat-health early warnings successfully limited the death toll.

Such heatwaves are consistent with climate scenarios which predict more frequent, drawn out and intense heat events as greenhouse gas concentrations lead to a rise in global temperatures.

"Every heatwave occurring in Europe today is made more likely and more intense by human-induced climate change," said a study published by scientists at World Weather Attribution on the Human contribution to record-breaking June 2019 heatwave in France.

"The observations show a very large increase in the temperature of these heatwaves. Currently such an event is estimated to occur with a return period of 30 years, but similarly frequent heatwaves would have likely been about 4 ºC cooler a century ago. In other words, a heatwave that intense is occurring at least 10 times more frequently today than a century ago," it said.

The five days of unusually high temperatures followed days with record-breaking temperatures further east in Europe. This led to the month as a whole being around 1°C above the previous record for June, set in 1999, and about 1°C higher than expected from the trend in recent decades, according to the European Centre for Medium Range Weather Forecast (ECMWF) Copernicus Climate Change Service.

Météo-France verified a new national temperature record of 46°C in Vérargues and a temperature of 45.9° Celsius in nearby Gallargues-le-Montueux on 28 June. It was the first time in modern French history that 45°C has been exceeded.

Such temperatures are more typical of August in Furnace Creek, Death Valley, California (which holds the record as the world’s hottest 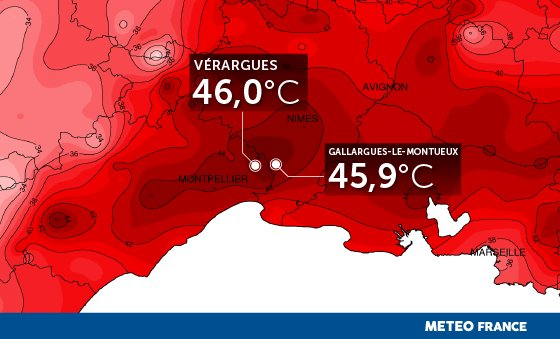 Spain also reported widespread temperatures above 40 degrees from 27 to 30 June. Very high to extreme fire risk continues in North Eastern Spain as a result. The Spanish national meteorological and hydrological agency AEMET issued a detailed article on the "June 2019 heatwave in the context of the climate crisis."

Austria is expected to have its warmest June on record, 4.5°C above the long-term average and ahead of 2003, according to the national meteorological and hydrological service ZAMG.

Temperatures above 40 °C were recorded in some places in In North Africa. Serious concerns have been raised about the well-being of players at the ongoing Africa Cup of Nations in Egypt as a consequence of extreme heat.

WMO’s European regional climate monitoring centre operated by the Deutscher Wetterdienst issued a Climate Watch on 25 June about “above-normal temperature for the next week over large parts of Europe.”

Temperatures in central Europe are expected to be between 3°C and 6°C above the long-term average, and 1°C to 3°C above average over remaining areas, according to the regional centre at Offenbach (Germany). A daily maximum temperature above 30°C is expected for most of the area during most of the time, partly above 35°C.

It warned that drought may accompany the heatwave in some areas, especially in Eastern Europe, whilst frequent thunderstorms with locally large hail are expected in Eastern Central and South-Eastern Europe. There will be a risk of heat stress for vulnerable people and of wildfires, it said.

The regional climate monitoring centre provides guidance information in a pre-operational mode for national meteorological and hydrological services, which are responsible for issuing warnings and advice in their own territory. 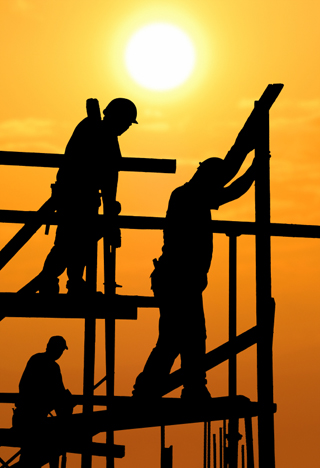 The heatwave in Europe follows extreme heat episodes in Australia, India, Pakistan and parts of the Middle East in 2019. More are expected to follow during this northern hemisphere summer.

Heat events kill thousands of people every year and often trigger secondary events such as wildfires and failures to electrical grids.

Between 2000 and 2016 the number of people exposed worldwide to heatwaves increased by an estimated 126 million. Urbanization compounds the problem. Heat stroke, dehydration, cardiovascular and other temperature related diseases are major health risks.

Several countries issued pollution alerts during the heatwaves, especially in urban areas. It is not only heat that affects people, but high levels of ozone as well. High temperatures, abundant sunlight, long days and the presence of ozone precursors, such as nitrous oxide and volatile organic compounds (VOCs), favour formation of tropospheric ozone, which is harmful to human health, crops and ecosystems and is also a greenhouse gas.

The Intergovernmental Panel on Climate Change issued a report last year on 1.5°C of global warming and it contained information on climate change and human welfare. Climate-related risks to health, livelihoods, food security, water supply, human security, and economic growth are projected to increase with global warming of 1.5 °C and increase further with 2 °C. Limiting warming to 1.5 °C rather than 2 °C could result in 420 million fewer people being exposed to severe heatwaves, it said.

WMO is, therefore, stepping up joint action with the World Health Organization to try to tackle health risks posed by extreme weather, including heatwaves, and air pollution, with a special focus on urban areas. WMO also supports the Global Heat Health Information Network.