Explaining extreme events in 2016 from a climate perspective

Explaining extreme events in 2016 from a climate perspective

Last year’s record global average temperatures, extreme heat over Asia, and unusually warm waters in the Bering Sea would not have been possible without human-caused climate change, according to a new report published in the Bulletin of the American Meteorological Society (BAMS).

Explaining Extreme Events in 2016 from a Climate Perspective presents 27 peer-reviewed analyses of extreme weather across five continents and two oceans during 2016. It features the research of 116 scientists from 18 countries, including from the US National Oceanic and Atmospheric Administration in the United States of America. It looks at both historical observations and model simulations to determine whether and by how much climate change may have influenced particular extreme events.

In the six years scientists have been producing this annual report, this is the first time they have found that extreme events could not have happened without human-caused warming of the climate through increases in greenhouse gases.

"This report marks a fundamental change," says Jeff Rosenfeld, editor-in-chief of BAMS. “For years scientists have known humans are changing the risk of some extremes. But finding multiple extreme events that weren’t even possible without human influence makes clear that we're experiencing new weather, because we've made a new climate.” 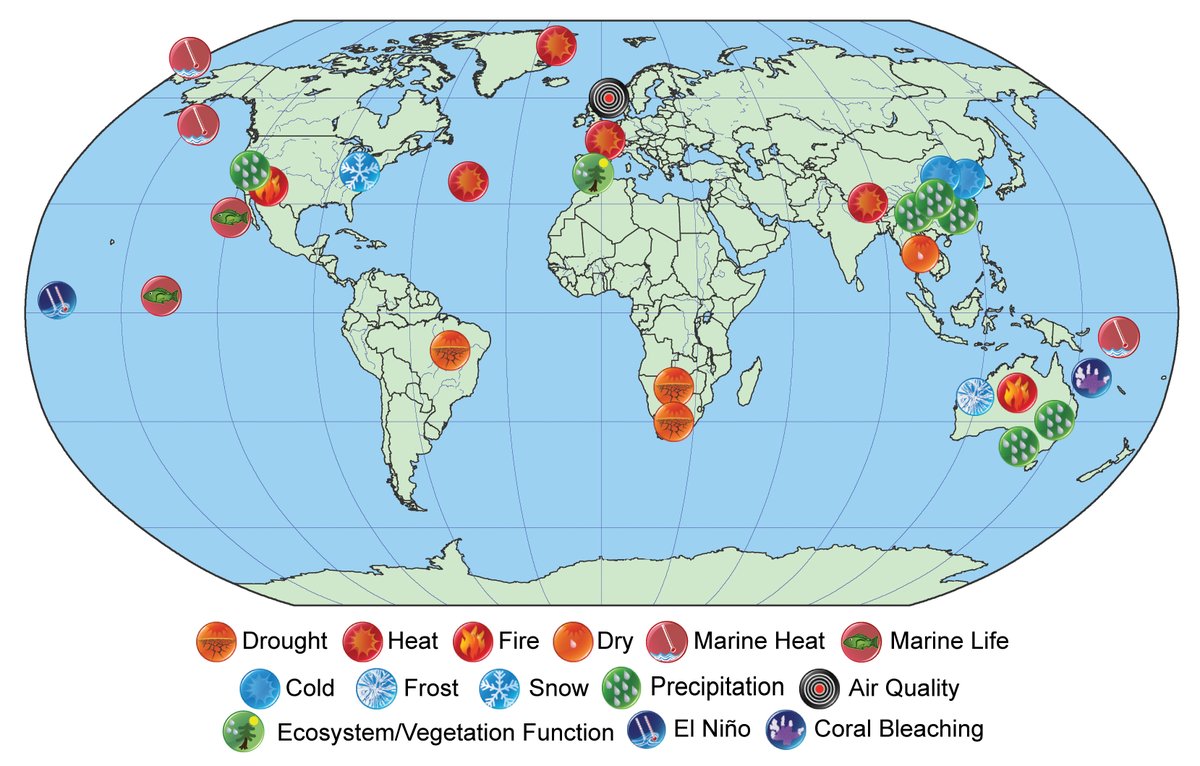 Human influence was also found to have increased the intensity and likelihood of other terrestrial heat events around the world, in addition to affecting the severity of the El Niño, the severity of coral bleaching in the Great Barrier Reef, and the warmth of the North Pacific Ocean that impacted fisheries and other resources in the Pacific.

This stems from improved tools to ascertain causes for extremes, and the fact that the warming of the planet is elevating the likelihoods of heat-related extremes, and some precipitation related extremes. Global heat: The record mean surface temperature for the world in 2016 was found to be “only possible due to substantial centennial-scale anthropogenic warming.”

Asia heat: “The 2016 extreme warmth across Asia would not have been possible without climate change.” Although El Niño (warming tropical Pacific waters) was expected to warm Southeast Asia in 2016, the heat in the region was unusually widespread. Another study produced evidence suggesting that a deadly April heat in Thailand, which devastated crops and broke records for energy usage, “would not have occurred in the natural climate” unwarmed by human influences, “even under the influence of a strong El Niño.”

Marine hot spots: Ocean temperatures in the Gulf of Alaska, Bering Sea, and off northern Australia were the most elevated in 35 years of satellite records, leading to massive bleaching of the Great Barrier Reef and one of the largest harmful algal blooms ever off the Alaska shore. Natural climate variations played a part, but one study finds “it was extremely unlikely that natural variability alone led to the observed anomalies,” and another study finds the blob of sub-Arctic 2016 warmth “cannot be explained without anthropogenic climate warming.”

As in previous years, most of this year’s studies found effects of human-caused climate change in extreme weather and climate.

Analysis of events examined in this report distinguish between the role of El Niño, other natural drivers, and human-caused climate change.

While the main cause of “the longest, most widespread, and most damaging global coral bleaching event on record” on the Great Barrier Reef was ocean warming caused by human influence, the impact of El Niño also exacerbated the bleaching.

About 20 percent of the events studied in this report were not linked by the findings to any appreciable influence of human-caused climate change. These included the failure of El Niño to enhance Southern California rains in 2016, the formation of the biggest midwinter snowstorm in the Mid-Atlantic states, and the drought that led to water shortages in Northeast Brazil.