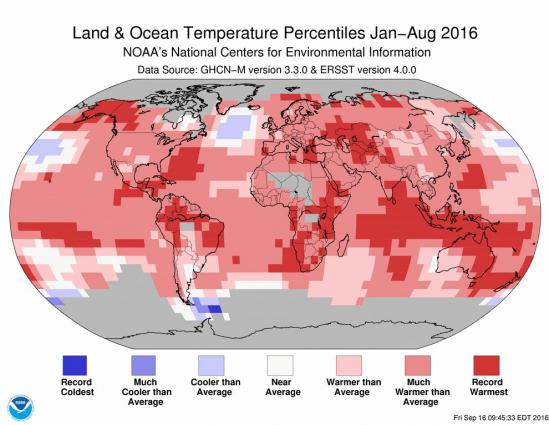 The exceptionally long spell of record global heat, a surge in greenhouse gas concentrations,  shocking coral reef bleaching and long-term Arctic sea ice melt all add urgency to the need for world leaders to ratify and implement the Paris Agreement on climate change, according to  the World Meteorological Organization.

United Nations Secretary-General Ban Ki-moon convened a special high-level event on 21 September to speed up ratification or accession to the Paris Agreement, reached in December 2015.

“We have witnessed a prolonged period of extraordinary heat, which is set to become the new norm,” said WMO Secretary-General Petteri Taalas, who travelled to New York to attend the General Assembly.

“We have observed both unusually high concentrations of carbon dioxide and the record breaking temperatures. The high temperatures of the sea water has aggravated severe coral reef bleaching.”

“All these findings increase the urgency of action in the implementation of the Paris Agreement to avoid temperatures exceeding the 1.5-2.0°C range above the pre-industrial era,” said Mr Taalas.

August was the hottest August on record for both land and oceans, according to data from the US National Oceanic and Atmospheric Administration, NASA’s Goddard Institute for Space Studies and the European Centre for Medium Range Weather Forecasting. NASA said that August 2016 tied with July 2016 as the hottest month ever recorded. The year to date has smashed all existing temperature records.

“Prospects of a cooling La Niña episode later this year are uncertain,” said Mr Taalas.  “It is looking likely that 2016 will the hottest year on record, surpassing the incredible temperatures witnessed in 2015,” he said.

“The heat in high latitudes has has been especially punishing for Arctic sea ice and the Greenland ice sheet”, said Mr Taalas.

The US National Snow and Ice Data Centre said Thursday that the Arctic’s ice cover appears to have reached its minimum extent on September 10, 2016, at 4.14 million square kilometers (1.60 million square miles). It was statistically tied at second lowest in the satellite record with the 2007 minimum. The figures are provisional.

It was a stormy, cloudy, and fairly cool summer. Historically,  such weather conditions slow down the summer ice loss.

“It really suggests that in the next few years, with more typical warmer conditions, we will see some very dramatic further losses,” said Ted Scambos, NSIDC lead scientist.

Arctic sea ice cover grows each autumn and winter, and shrinks each spring and  summer. The maximum Arctic sea ice extent in March 2016 was the lowest on record. The Greenland ice sheet also began its melt unusually early this year.

The extent of Arctic sea ice at the peak of the summer melt season now typically covers 40 percent less area than it did in the late 1970s and early 1980s.

Heat in August and September

Data from NOAA, NASA and the European Centre for Medium Range Weather Forecasting confirmed that August 2016 set yet another monthly record.

WMO uses a combination of international datasets to compile its annual statements on the Status of the Global Climate. It will issue its provisional statement for the UN climate change negotiations in Marakkech, Morocco, in November.

Many parts of Europe experienced exceptionally high temperatures in the first half of September. In the United Kingdom, for instance, Gravesend in Kent reached 34.4°C on 13 September – the hottest September day since 1911. Denmark saw temperatures of up to 29.9°C.  France saw temperatures on 12 September which were 8 to 12 ° C above average for this time of year.

The ocean in a warmer world

The ocean is protecting us from the worst impacts of global warming by not only storing more than 90 per cent of the extra heat from greenhouse gases but also by taking up about a third of the total man-made emissions of carbon dioxide.

New research into the complex interactions between the ocean and the global climate – as evidenced by the recent super El Niño - will be examined at an international scientific gathering in China. The conference will also focus on how the ocean is bearing the brunt of global warming, with huge consequences for the future of the planet.