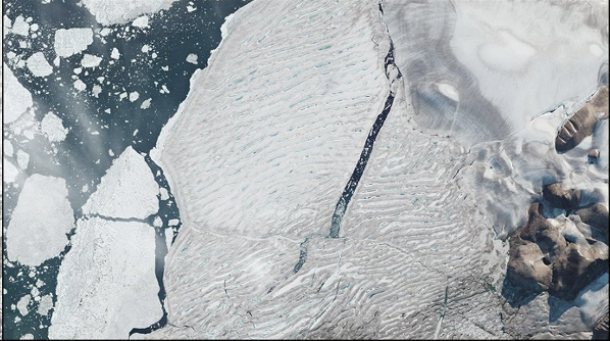 The summer of 2020 will leave a deep wound in the cryosphere, with a major impact on ice shelves and glaciers in the Northern hemisphere. The WMO Global Cryosphere Watch network and the International Cryosphere Climate Initiative has prepared a report of the main events, based on contributions from different partners. 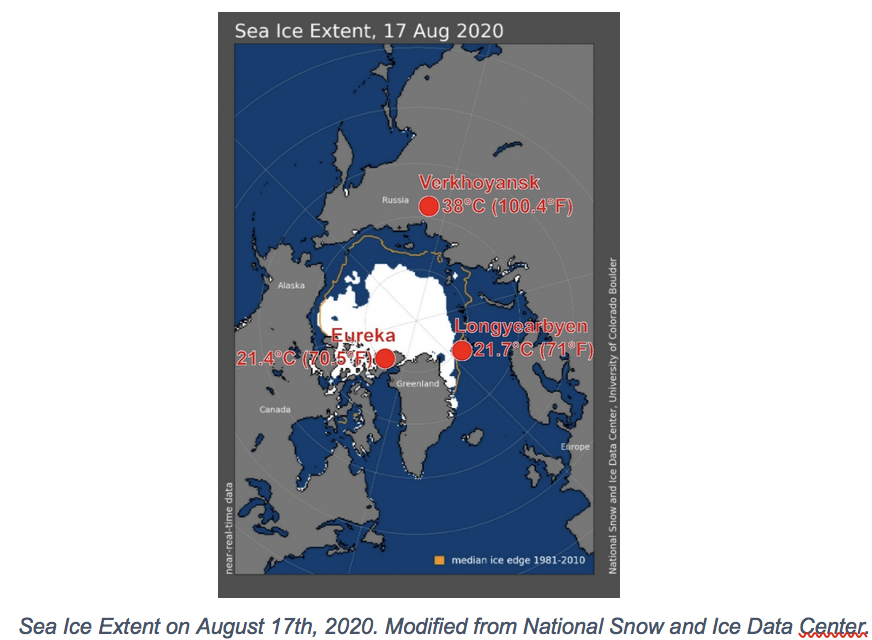 WMO is playing an increasingly active role in the cryosphere domain as the changing environments have increased the demand for sustained services in polar and high-mountain areas and downstream. These depend on the integration of actionable information on the state of the cryosphere.

Temperatures in the Arctic are rising faster than the global average. Unique amplification processes and feedbacks, such as the rapid decline of sea ice, significantly contribute to this warming. The consequences of a warming Arctic will be far-reaching across the northern hemisphere.

Ice sheets in Greenland and Antarctica whose melting rates are rapidly increasing have raised the global sea level by 1.8cm since the 1990s, and are matching the Intergovernmental Panel on Climate Change's worst-case climate warming scenarios, according to a new study published in Nature Climate Change.

If these rates continue, the ice sheets are expected to raise sea levels by a further 17cm and expose an additional 16 million people to annual coastal flooding by the end of the century. Since the ice sheets were first monitored by satellite in the 1990s, melting from Antarctica has pushed global sea levels up by 7.2mm, while Greenland has contributed 10.6mm. And the latest measurements show that the world's oceans are now rising by 4mm each year, according to the study from the University of Leeds and the Danish Meteorological Institute, which is one of the collaborators in Global Cryosphere Watch.

A number of new temperature records were set in 2020. On 20 June, the Siberian town of Verkhoyansk located above the Arctic circle at 67.55°N experienced 38 °C (100.4°F) for the first time, as confirmed by the Russian Federal Service for Hydrometeorology and Environmental Monitoring. Maximum temperatures in June exceeded 30 °C for 10 days prior to that.

Further north, on the Svalbard archipelago, at 78°N, a new temperature measurement shattered a 41-year-old record, with 21.7 °C (71°F) measured in the town of Longyearbyen on 25 July. Even further north, at Eureka station in Nunavut, the Canadian National Weather Service reported 21.9 °C (71.4 °F) on 11 August. The heatwave across the Arctic was accompanied by record-breaking wildfires in Russia, close-to record low sea ice extent, and the collapse of one of the last fully intact Canadian ice shelves.

Between 30 and 31 July, an 81 km2 (30 mi2) portion of the Milne ice shelf broke off, reducing the total area of the ice shelf by 43%. The Canadian Ice Service cited the above-normal air temperatures, offshore and alongshore winds and the lack of sea ice, along with long-term thinning and the presence of pre-existing fractures, in addition to melt ponds on the ice surface.

The northern coast of Ellesmere Island is home to Canada’s Arctic Ice Shelves. These are typically made of continental ice that has flowed onto the ocean and nourished by glaciers, snowfall, and refrozen meltwater. In the Arctic, sea ice or fast-ice permanently connected to land is also a significant component of some ice shelves. Arctic ice shelves are less common than their Antarctic counterparts but host unique marine ecosystems inhabited by rich and rare biodiversity.

The consequences of this collapse are several: the loss of a rare ecosystem, the potential acceleration of glaciers into the ocean leading to further sea level rise, and the formation of new drifting ice islands resulting from the calving.

The Milne Ice Shelf has produced two large ice islands measuring 55 km2 and 24 km2 which have already begun to drift southwest, long the coast of Ellesmere Island. These can be potentially hazardous to shipping and mining activities within the waterways.

“As the climate warms in the Arctic, recent changes in the floating ice cover along northern Ellesmere Island show that an area that was once characterized by ice shelves, multiyear sea ice and floating glacier termini, is no longer capable of sustaining these types of features,” said Ms White.

A glacial outburst flood in Iceland

On 17 August 2020, a flood occurred from a small marginal lake at the western margin of the Langjökull, Iceland´s second largest ice cap.

The lake has been forming over the past 20 years due to the steady retreat of the glacier, according to Thorsteinn Thorsteinsson, glaciologist at the Icelandic Meteorological Office.

According to preliminary estimates, 3.4 million m3 were released from the lake, making this a small event in comparison with large outburst floods resulting from subglacial lakes and subglacial volcanism at other locations in Iceland. But it underscores the importance of monitoring the formation of new marginal lakes in a period of rapid glacier retreat, and assessing new flooding hazards and the impact on ecosystems.

The marginal glacial lake before and after the flooding event can be observed on two Sentinel images here. 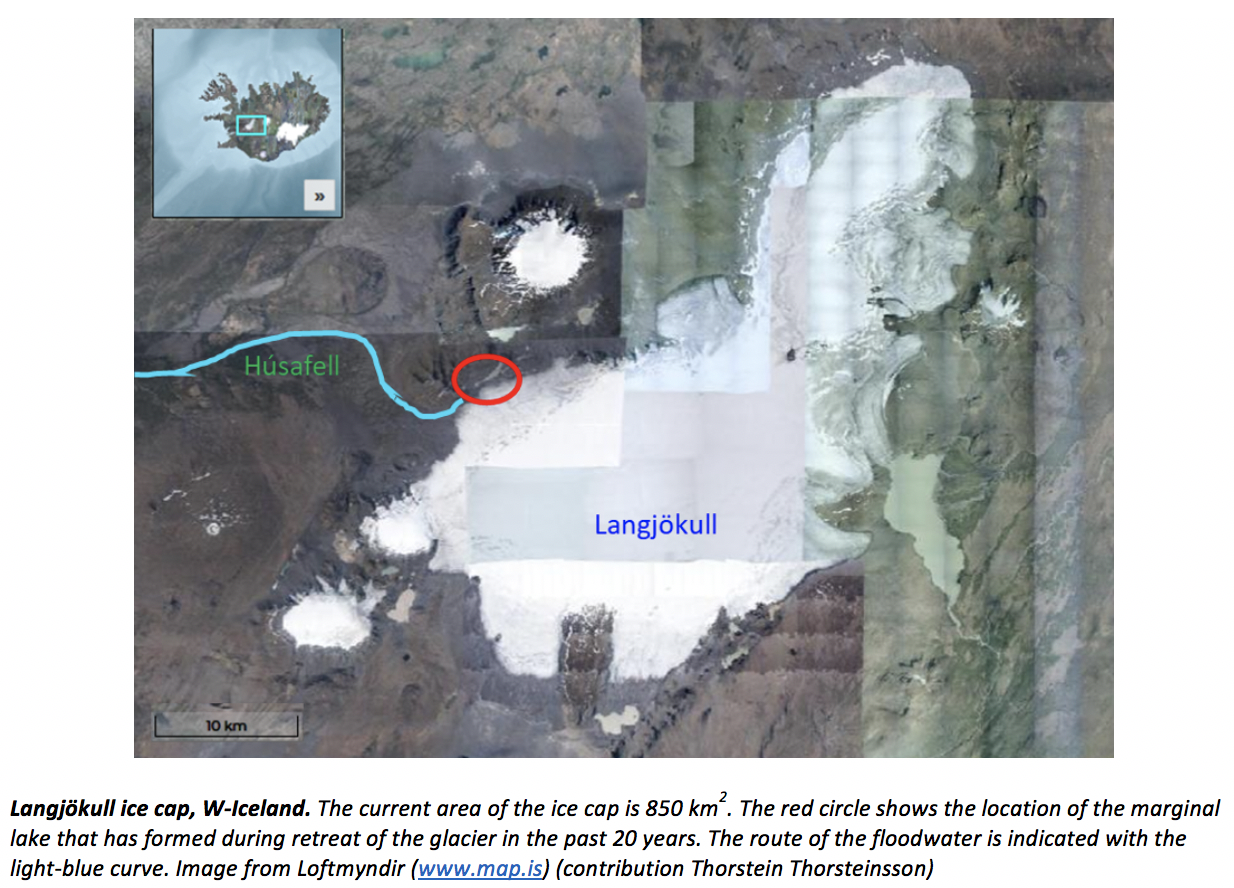 The European Alps are warming

Temperatures in the European Alps have increased by 2°C during the 20th Century. This “amplification” is attributed to the decrease in snow ice cover revealing darker rocks that absorb more solar radiation.

A sustained heatwave was recorded through July and beginning of August. In France, 40.4 °C was recorded at the beginning of July in Ayze, a small town in the heart of the Mont Blanc massif, while 5 °C was measured at the altitude of 4000 m above Courmayeur, on the Italian side of Mont Blanc, in early August.

In Switzerland, the Turtmann Glacier in the Valais Alps split in two, losing 300 000 m3 in a dramatic collapse that took place on 6 August.

Daniel Farinotti, Glaciologist at ETH Zürich, Switzerland said: “The glacier retreat that we observe in the Alps does not only affect our landscapes, but also our water resources and parts of our economy. Abrupt mass loss events like the one observed at Turtmann Glacier are rare, but are illustrative for how glaciers suffer from abnormally warm summers. And the recipe for avoiding further warming is clear: we need to abate emissions. In this sense, much of the glacier's future is in our hands: it depends on the choices we make today."

In Italy, the Planpincieux glacier located in the Aosta Valley above Cormayeur, in the Mont Blanc massif, has been on the brink of collapse for more than 2 years. Closely monitored by Italian researchers in collaboration with Fondazione Montagna Sicura, the glacier sped up to reach velocities over more than 1 m per day at the beginning of August, prompting the evacuation of the nearby hotels and houses. More than 500 000 m3 of ice were gradually peeling off from the main body of the glacier, but eventually did not collapse.

“Like in 2019, also in this year a large volume of ice moved fast and threatened the Planpincieux village. Presently, after the speed-up of the beginning of August, the situation appears less critical, but we are continuously monitoring the glacier to survey its evolution because the large fracture above the unstable portion still exists and further acceleration might occur,” said Niccolò Dematteis from IRPI (Research Institute for Hydrogeological Protection) in Italy.

Affected by the persistent heavy precipitation in Jiali County since late May, the Jinwuco moraine-dammed lake in Niwu Township, Jiali County, Tibet Autonomous Region burst on June 25, 2020. Remote sensing images show that there were a large number of ice/snow/rock avalanches falling into the glacier lake on 21 June. The day following the outburst, the flood peak reached the downstream Niwu Township, releasing over 7 million cubic meters of water in the valley, and causing casualties and destroying infrastructure, according to Shijin Wang, Northwest Institute of Eco-Environment and Resources.

The summer of 2020 will leave a deep wound in the cryosphere. The calving of the Milne Ice Shelf, the collapse of Turtmann glacier and the threatening acceleration of the Planpincieux glacier remind us of the sensibility of the cryosphere to climate changes. These extreme mass losses cannot be replenished under the current climate, and might become more frequent in the future if emissions of greenhouse gases remain unabated.

The floods resulting from the outburst of glacier lakes are becoming an increased factor of high-risk in many parts of the world, putting at risk people and infrastructure. This is a worrisome trend and emphasize the need for sustained risk management and adaptation measures supported by a good understanding of rapid changes in these environments.

WMO’s is playing an increasingly active role in the cryosphere domain as the changing environments have increased the demand for sustained services in polar and high-mountain areas and downstream, globally, the accuracy of which depend on the integration of actionable information on the state of the cryosphere.

Experience has shown that polar and many mountain regions have remained insufficiently monitored, due to high costs, difficult access, extreme operating conditions, insufficient technical and operational local capacity, absence of, or weak institutional mandates. Insufficient data exchange mechanisms across sectors continue to hamper the development of hydro-meteorological and climate services, for polar and mountain regions, where existing data sources are underutilized or lost due to fragmentation across multiple operators and the lack of harmonized data policies.

As an activity of WMO, Global Cryosphere Watch is uniquely positioned to build on the traditional convening role of WMO and to foster international coordination and partnerships between scientific and operational communities and between scientists and practitioners, to enable the delivery of necessary services, sustainably, by leveraging the advances in understanding the role of the cryosphere in the Earth system.