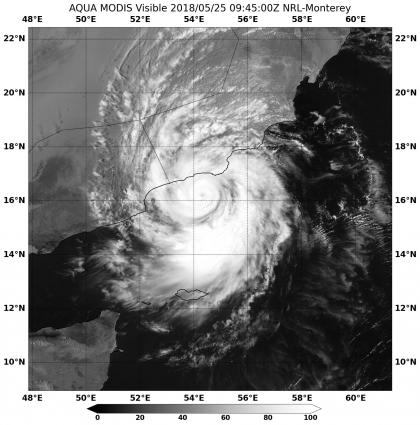 Mekunu developed in the Arabian Sea and impacted Oman and Yemen as an extremely severe cyclonic storm.  It followed less than a week after cyclone Sagar,  which caused flash floods and casualties in Yemen, Somalia and Djibouti. Regular warnings from meteorological services and mobilization by disaster management authorities helped keep loss of life and property to a minimum.

WMO’s Regional Specialized Meteorological Centre (RSMC) New Delhi, operated by the India Meteorological Department, accurately forecast that Mekunu would make landfall on the evening of 25/26 May near the Oman port city of Salalah. It was the equivalent of a category 3 hurricane on the Saffir Simpson scale, with maximum sustained wind speed of  170 to 180 km/h, gusting to 200 km/h.

Storm surge and huge waves inundated low lying areas near the coast. Oman’s Directorate-General of Meteorology said that 328 mm of rainfall was recorded in Salalah in a 36 hour period from 24 May (000UTC) to 25 May (12UTC). This compares with annual average precipitation in the city of 130 mm.

Scenes from Salalah showed widespread devastation, with damage to roads and infrastructure. On the basis of warnings from Oman’s meteorological department and its National Multi-Hazard Early Warning Centre, exposed areas were evacuated, medical facilities were readied and the port and airport was closed ahead of Mekunu’s landfall.

En route to Oman, Mekunu hit the Yemeni island of Socotra, where at least 17 people  were reported missing feared dead as a result of high winds and heavy thundershowers leading to flooding. An aid operation for Socotra, which is a UNESCO heritage site famed for its biodiversity, was launched.  Socotra was also hit by cyclonic storm Megh in November 2015.

Cyclones striking the Arabian Peninsula are rare but not exceptional.

Above average Southwest Arabian sea surface temperatures of 29-31° Celsius are conducive to the development and intensification of tropical cyclones.

In June 2007, Super Cyclonic Storm Gonu killed 50 people and caused about US$4.2 billion in damage in Oman. It dropped as much as 610 mm of rain near the eastern coastline, causing flooding and heavy damage. In June 2010 Very Severe Cyclonic Storm Phet moved across eastern Oman, causing floods, wrecking homes  and causing casualties.

Yemen is especially vulnerable to the impacts of Mekunu, which comes hard on the heels of Sagar. Djibouti and northern Somalia bore the brunt of the impacts of Sagar, which destroyed homes and washed away property and livestock and reportedly claimed about 20 lives.