First Conference of Ministers Responsible for Meteorology in Africa (12-16 April, 2010) 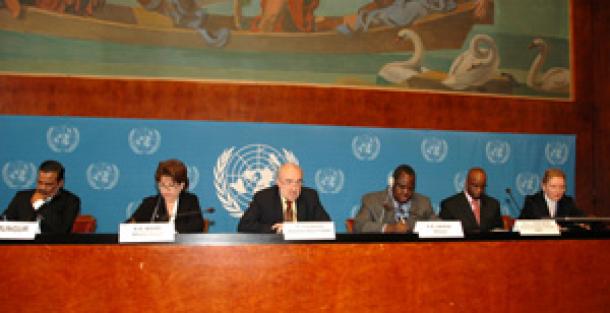 First Conference of Ministers Responsible for Meteorology in Africa (12-16 April, 2010)

At a press conference in Geneva on 16 March, Michel Jarraud, Secretary-General of WMO, announced that African Ministers responsible for meteorology will meet in Nairobi, Kenya, to explore the best ways to strengthen weather, climate and water information for decision-making to help achieve the UN Millennium Development Goals. Recognizing the need to strengthen the role and contribution of African National Meteorological and Hydrological Services to Government policies and initiatives for mitigating and adapting to climate change, Ambassador Philip Richard Owade, Permanent Representative of Kenya, underlined the timeliness of the Ministerial conference for the African continent. Ambassador Khadija Rachida Masri, Permanent Observer of the African Union (AU) mentioned that the AU “felt the need in Africa to have ministerial conferences on very specific fields” such as meteorology. “Our goal, with WMO, is to reinforce meteorological capacities in African countries in order to prevent the negative impacts of climate change”, she added. WMO, in partnership with the AU, is organizing the First Conference of Ministers Responsible for Meteorology in Africa, from 12 to 16 April 2010, with the support of the Government of Kenya.