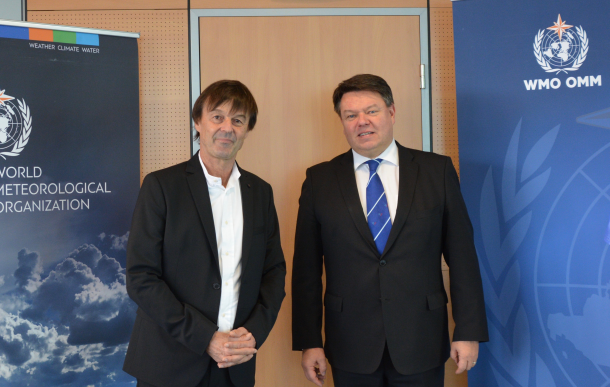 The meeting came during an official one-day visit by Minister Hulot to Geneva to address the International Organization for Migration council session on climate change and migration.

“In Geneva with the World Meteorological Organization. Meteorological forecasts and observations are essential to adapt to climate change. We need to share data and satellite information so that even the poorest countries have access to information,” Mr Hulot tweeted.

He also underlined the importance of water in connecting mitigation and adaptation and announced French support for WMOs water data initiatives. 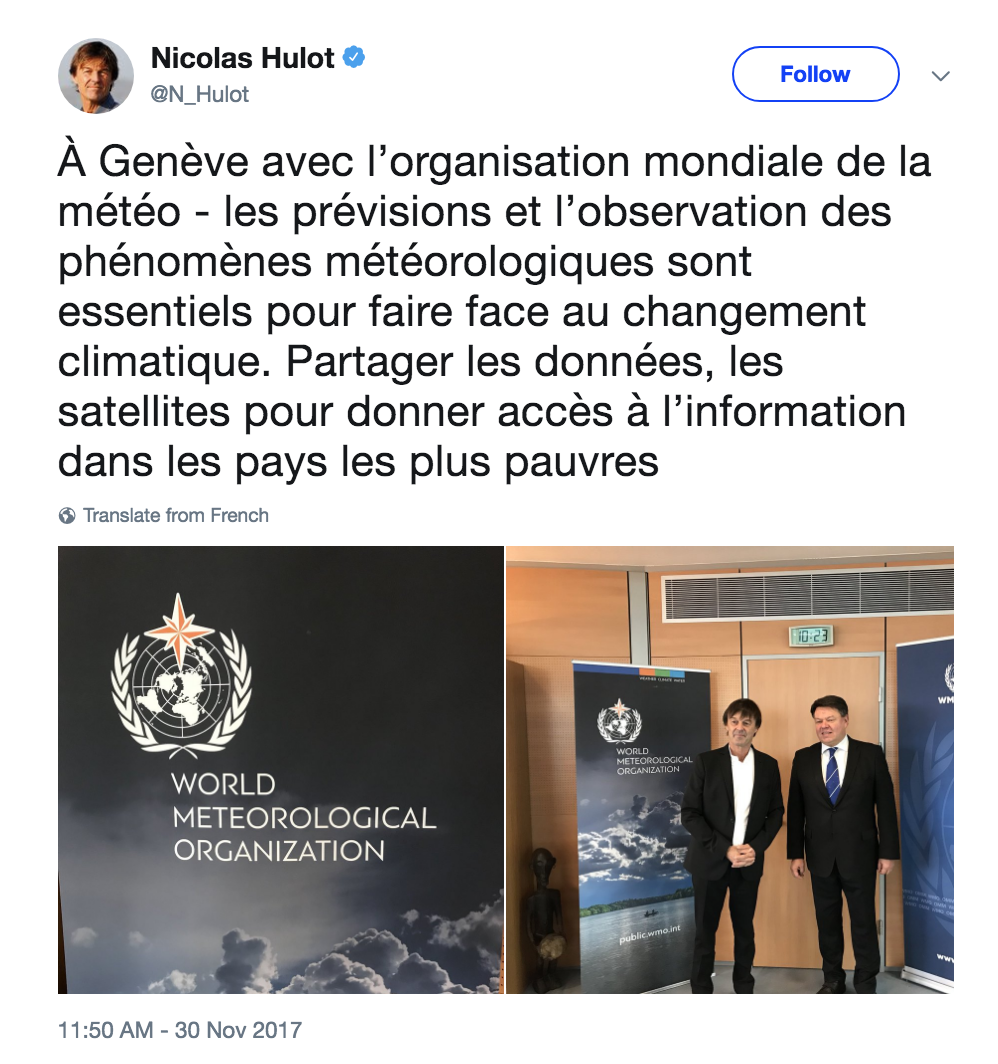 French President Emmanuel Macron has organized a summit on climate change and climate financing in Paris on 12 December. Mr Taalas will speak at one of the sessions.

President Macron addressed the recent United Nations climate change meeting in Bonn and pledged to guarantee funding for the Intergovernmental Panel on Climate Change in the event of any cuts from the US government.

France is spearheading the Climate Risk and Early Warning Systems (CREWS) initiative. Launched at the Paris climate change negotiations in 2015, CREWS aims to mobilize US$100 million by 2020 to save lives and support sustainable development.

CREWS aims to increase resilience of vulnerable communities in Africa and the Pacific and Caribbean with improved early warning systems against extreme weather.

"The government of France has had a great contribution for the success of WMO. The top class expertise of Meteo-France has not only benefited the citizens of France, but the expertise is widely shared with several WMO Members in successful twinning programs," said Mr Taalas. "The establishment of CREWS funding instrument to support early warning development projects in developing countries is highly valued. France plays also an essential role in the work of IPCC."

“In the Paris Agreement era, it is unacceptable that populations are not forewarned of an impending weather disaster. Let us now reinforce support for CREWS, launched in Paris at COP21, to enable the most vulnerable to benefit from effective early warning systems,” declared Mr Hulot in a CREWS side event at the UN climate conference in Bonn.

CREWS is being implemented by the World Meteorological Organization (WMO), the World Bank, and the Global Facility for Disaster Reduction and Recovery (GFDRR) with support of the UN Office for Disaster Risk Reduction (UNISDR).