Glasgow Climate Pact agreed at COP26 – but is it enough?

Glasgow Climate Pact agreed at COP26 – but is it enough?

The UN Climate Change negotiations, COP26, have concluded with a global compromise that reflects a delicate balance between the interests and aspirations of nearly 200 Parties involved. But, according to preliminary analyses, it falls short of the decisive breakthrough needed to keep temperature increase to 1.5°C above the pre-industrial era by the end of this century.

The Glasgow Climate Pact strengthened adaptation, mitigation and finance measures and laid important building blocks for future action. But relief about the agreement was tempered by disappointment at the level of commitment both for mitigation and adaptation.

“The approved texts are a compromise. They reflect the interests, the conditions, the contradictions and the state of political will in the world today.  They take important steps, but unfortunately the collective political will was not enough to overcome some deep contradictions,” said United Nations Secretary-General António Guterres.

“Science tells us that the absolute priority must be rapid, deep and sustained emissions reductions in this decade. Specifically — a 45% cut by 2030 compared to 2010 levels.

But the present set of Nationally Determined Contributions -- even if fully implemented -- will still increase emissions this decade on a pathway that will clearly lead us to well above 2 degrees by the end of the century compared to pre-industrial levels,” he said. 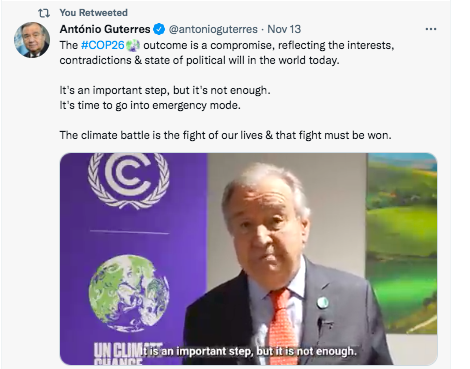 Alok Sharma, UK President of COP26 said: “We can now say with credibility that we have kept 1.5 degrees alive. But its pulse is weak.”

The Paris Agreement seeks to keep global temperature rise this century well below 2°C degrees Celsius above pre-industrial levels and to pursue efforts to limit the temperature increase even further to 1.5°C. National commitments to cut emissions, currently fall far short of what is needed to achieve this target. The conference in Glasgow was seen as a make-or-break chance to get the world back on track to 1.5°C.

World Meteorological Organization Secretary-General Prof. Petteri Taalas said that there had been progress in mitigation efforts, with the first ever specific mention of fossil fuels and subsidies. The concluding declaration noted the need for “accelerating efforts towards the phase-down of unabated coal power and inefficient fossil fuel subsidies, recognizing the need for support towards a just transition.

This was widely perceived as a step in the right direction, but too weak.

“The outcome doesn’t support the pathway towards the 1.5 C target,” said Prof Taalas.

“One should keep in mind that most essential mitigation challenge is to reduce the use of fossil fuels due to the dominant role of carbon dioxide and its very long lifetime,” he said. But he added that WMO welcomed declarations on forest loss and methane emission controls, which are expected to support mitigation.

The WMO Greenhouse Gas Bulletin, released ahead of the conference to inform the negotiations, showed that greenhouse gas levels in the atmosphere continue at record levels. The provisional State of the Global Climate 2021 report gave details of climate change indicators like temperatures, sea level rise, ocean heat, retreating glaciers and extreme weather, and impacts of food security, displacement and migration and socio-economic development.

The final COP26 declaration welcomed “the contribution of Working Group I to the Intergovernmental Panel on Climate Change Sixth Assessment Report and the recent global and regional reports on the state of the climate from the World Meteorological Organization.”

Adaptation and finance were the object of particular emphasis during the deliberations. There was consensus in the need for more support to developing countries, and Parties both welcomed a call to double finance for adaptation, and reaffirmed the pledge of providing 100 billion dollars annually from developed to developing countries. Many developing countries were disappointed however with the decision to initiate only a dialogue to talk about funding activities to avert, minimise and address loss and damage.

There were also high-level events for the creation of the Systematic Observations Financing Facility and the Water and Climate Coalition.

“The Heads of State and Government and the delegates who participated in COP26 brought to the conference a keen awareness of the severity of the climate crisis that the world faces and of the need to live up to the historic responsibility of setting the world on the path to address this existential challenge. They leave Glasgow with clarity on the work that needs to be done, more robust and effective instruments to achieve it, and a heightened commitment to promote climate action —and to do so more quickly— in every area,” said UN Climate Change Executive Secretary, Patricia Espinosa.