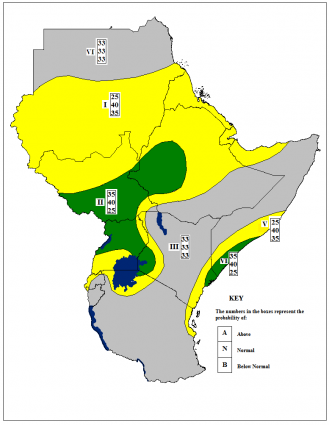 The Greater Horn of Africa Climate Outlook Forum has issued its seasonal predicitions (pdf) for the forthcoming June to August 2015 rainy season rainy season, which is important for agriculture and food security in a region vulnerable to both droughts and floods.

The regional consensus climate outlook indicates increased likelihood of near normal to below normal rainfall over much of the Greater Horn of Africa and increased likelihood of near normal to above normal rainfall over parts of coast and the western  areas  of the equatorial sector. For the rest of Greater Horn of Africa, June to August period is a dry season and these areas are expected to remain generally dry during June to August 2015.

The consensus climate outlook, based on a review of the state of the global and regional climate systems, was issued at the end of a meeting organized by the Intergovernmental Authority on Development Climate Prediction and Applications Centre (ICPAC),  from 25 to 26 May in Djibouti.

The World Meteorological Organisation (WMO) and the major global climate centres have noted the warming of Sea Surface Temperatures (SSTs) over the equatorial Pacific Ocean with approximately 90% chance that moderate El Niño will continue through Northern Hemisphere summer 2015. Indian Ocean Dipole (IOD) that also has significant influence on regional climate is also expected to contribute to regional rainfall anomalies during the next several months. The influence of these ocean processes will be modulated by regional circulation patterns especially monsoonal winds, Somali Jetstream, together with the influence of topography and large inland water bodies. Updates on El Niño will be provided regularly by WMO and the major climate centres.

The forum brought together national, regional and international climate experts as well as users of climate early warning advisories and development partners. It  discussed the potential implications of the rainfall predictions for sectors like food security, health and water resources and for disaster risk reduction. Participants also discussed mitigation and coping strategies.

National Meteorological and Hydrological Services will downscale the regional forecast to provide national and local predictions that can be used by the agriculture, fisheries, energy, transport sectors and other users.

WMO has been supporting Regional Climate Outlook Forums around the world, ever since the inception of the first forum in Southern Africa in 1997. Regional Climate Outlook Forums presently serve more than half the world’s population. WMO is working to ensure that the climate outlook information is reliable, accessible and relevant to the user community as part of the Global Framework for Climate Services.

Rainfall Outlook for June to August 2015

The rainfall outlook for various zones within the GHA region is given in figure 1 below.

Zones I & V:       Increased likelihood for near to below normal rainfall

Zones II & VI:    Increased likelihood of near normal to above normal rainfall