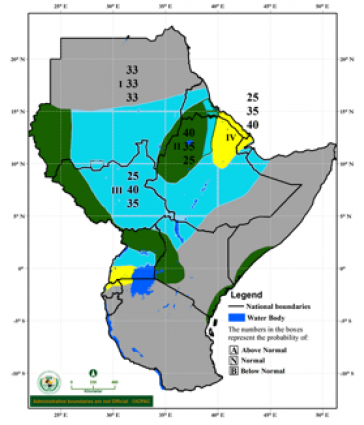 The Greater Horn of Africa Climate Outlook for the important June to September 2017 rainfall season indicates increased likelihood of near normal rainfall over most of the northern parts of the region. Some areas including northern Ethiopia, parts of the Sudan, South Sudan, parts of Uganda and western Kenya are likely to have above normal rainfall.

The outlook indicates increased likelihood of early to timely onset of the June – September rains over much of the northern sector and delayed onset and early withdrawal at the northern edge of the monsoon rain-belt  and in the lowlands of extreme north-eastern Ethiopia. Although the consensus temperature outlook indicates enhanced likelihood of above normal temperatures over many parts of GHA,  cool and cloudy conditions are anticipated over the highlands of the equatorial and southern sectors.

The outlook was issued by the Greater Horn of Africa Climate Outlook Forum, which met in Sudan on 15-16 May, and was convened by the IGAD Climate Prediction and Applications Centre (ICPAC), UNDP and other partners.  “The World Meteorological Organisation (WMO) and the major global climate centres have indicated persistence of ENSO – neutral conditions during April to June 2017, and a 60% chance of a shift towards El Niño near the end of 2017,” it said.

“The major factors deriving the current forecast are the neutral ENSO conditions over the equatorial Pacific Ocean, warmer than average sea surface temperatures over western Indian Ocean with cooler conditions over the central and eastern Indian Ocean implying a weak Indian Ocean Dipole (IOD).  Over the Atlantic Ocean, warmer than average sea surface temperatures dominated over the Gulf of Guinea. These factors when considered alongside the likely source and distribution of regional rainfall during June to September 2017 favour near normal over most of the northern sector.” 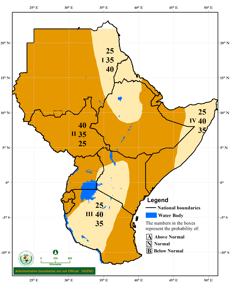 Zone I:  Increased likelihood of below normal mean temperatures