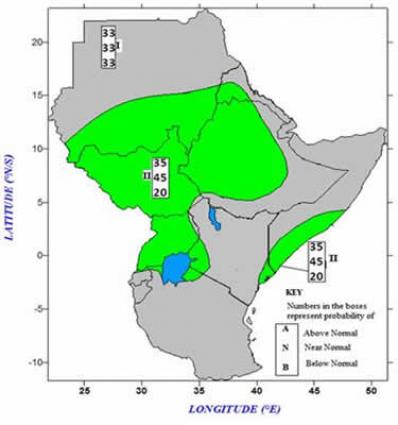 The Greater Horn of Africa Climate Outlook Forum predicts there may be near normal to above normal rainfall in parts of the region which have a rainy season in June to September.

The next three-months constitute an important rainfall season over the northern sector (Djibouti, Eritrea, Ethiopia, northern and central Somalia, South Sudan and Sudan) and the western parts (southwestern Somalia) of the equatorial sector of the Greater Horn of Africa.

A consensus climate outlook issued 30 May indicated an “increased likelihood of near normal to above normal rainfall over western and central areas of the northern sector as well as the western and coastal parts of the equatorial sector.”

For the rest of Greater Horn of Africa, June to August is a dry season and these areas are expected to remain generally dry during that period. >> more