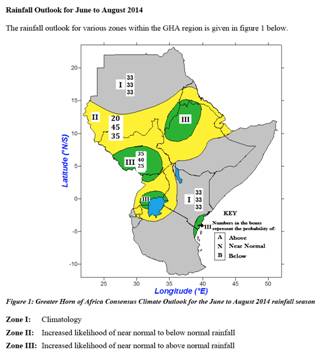 The Greater Horn of Africa Climate Outlook Forum has issued its seasonal outlook for the forthcoming June to August rainy season, factoring in the likely development of an El Niño event which may have significant climatic impacts over parts of Eastern Africa.

June to August constitutes an important rainfall season over the northern sector and the western parts of the equatorial sector of the Greater Horn of Africa (GHA) region. The regional consensus climate outlook indicates increased likelihood of near normal to below normal rainfall over most parts of the northern and equatorial sectors except for parts of north western Ethiopia; south-eastern Uganda and much of South Sudan which have increased likelihood of receiving near normal to above normal rainfall. The rest of the region is expected to remain dry as usual at this time of year.

Factors influencing the climate include sea surface temperatures over western Indian Ocean, together with the atmospheric and oceanic conditions collectively

associated with El Niño.  Most models indicate that El Niño - neutral conditions will persist through part of the remainder of the Northern Hemisphere spring 2014 season (March-May) and most likely transitioning to El Niño during June-August months. WMO is monitoring the situation.

“Past records show depressed rainfall in Northern sector of GHA during strong El Nino years. It should be noted that many parts of the eastern sectors of the GHA received low rainfall during March to May 2014 season. Drought occurrence during the months of June-August would have far reaching consequences,” said the climate outlook.

The climate outlook was issued at the end of the 37th session of the Forum organized by the Intergovernmental Authority on Development Climate Prediction and Applications Centre (ICPAC),25-26 May 2014 in Khartoum, Sudan. It brought together national, regional and international climate experts as well as users of climate early warning advisories from sectors such as food security, health and water resources and for disaster risk reduction.

WMO has been supporting Regional Climate Outlook Forums around the world, ever since the inception of the first forum in Southern Africa in 1997. Regional Climate Outlook Forums presently serve more than half the world’s population. WMO is working to ensure that the climate outlook information is reliable and accessible to the user community as part of the Global Framework for Climate Services.