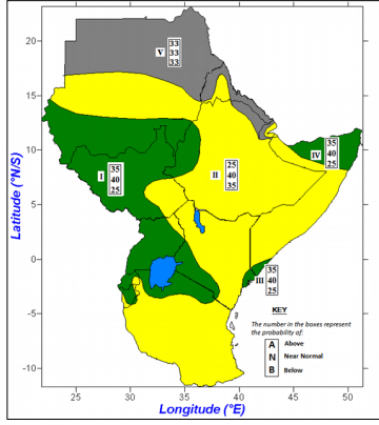 The Greater Horn of Africa Climate Outlook Forum has issued its seasonal predictions for the forthcoming March-May 1015 rainy season, which is important for agriculture and food security in a region vulnerable to both droughts and floods.

The consensus climate outlook, based on a review of the state of the global and regional climate systems, was issued at the end of a meeting organized by the Intergovernmental Authority on Development Climate Prediction and Applications Centre (ICPAC),  from 23 to 25 February in Nairobi, Kenya.

The forum brought together national, regional and international climate experts as well as users of climate early warning advisories and development partners. It  discussed the potential implications of the rainfall predictions for sectors like food security, health and water resources and for disaster risk reduction. Participants also discussed mitigation and coping strategies.

National meteorological and hydrological services will downscale the regional forecast to provide national and local predictions that can be used by the agriculture, fisheries, energy, transport sectors and other users.

WMO has been supporting Regional Climate Outlook Forums around the world, ever since the inception of the first forum in Southern Africa in 1997. Regional Climate Outlook Forums presently serve more than half the world’s population. WMO is working to ensure that the climate outlook information is reliable, accessible and relevant to the user community as part of the Global Framework for Climate Services.