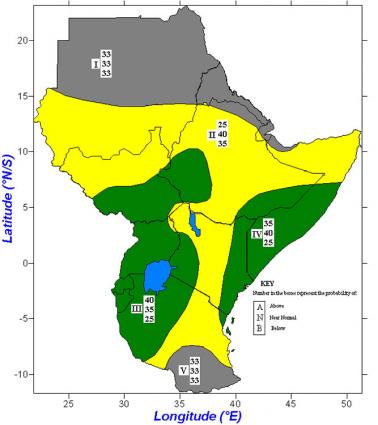 The Greater Horn of Africa Climate Outlook Forum has issued its regional climate outlook for the September to December period, which is an important rainfall season for the equatorial sector.

It was preceded by capacity building training workshops for national climate scientists as well as water resources and physical oceanography experts.  Users of climate information were drawn from health, disaster management, agriculture and food security, water resources and media sectors as well as non-governmental organisations and development partners. They provided sector specific assessment of the skill and usefulness of the previous regional consensus climate outlooks and formulated mitigation strategies.

WMO is working to strengthen regional climate outlook forums around the world as part of the Global Framework for Climate Services which aims to provide more user-driven climate services to help society cope with climate variability and climate change.

The key factors expected to influence the evolution of the regional climate during the September to December rainfall season in the Greater Horn of Africa include the Sea Surface Temperatures (SSTs) over the tropical Oceans including (i) the phase and strength of Indian Ocean Dipole mode (IOD), possible development of Cyclones over the western Indian Ocean;  (ii) SST anomalies over equatorial eastern Pacific region and the evolution of the El Niño  conditions  during the  forecasts period, and  (iii)  SST  anomalies  over the Atlantic Ocean.