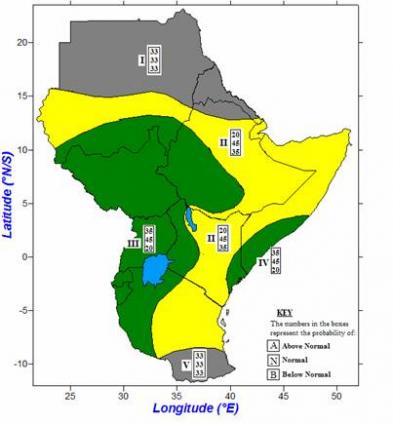 The latest session of the Greater Horn of Africa Climate Outlook Forum has concluded that, in the forthcoming September-December rainy season, most parts of the region are likely to receive near normal rainfall. September to December constitutes the second most important rainfall season, after March-May, over southern Somalia and other equatorial parts of the Greater Horn of Africa (Kenya, Uganda, Burundi, Rwanda and northern Tanzania). Temperature outlook indicates increased likelihood for warmer than average temperatures over the southern and equatorial sectors during the September to December 2013 season.

The Forum issued a consensus-based regional climate outlook following a review of the current and expected future state of the global climate system, large-scale climate anomalies and their implications for the 11 countries in the Greater Horn of Africa region. Meteorological experts as well as representatives from disaster risk management, water resources, agriculture and food security, health and development sectors were among the participants. The 35th session of the forum was held from 21-23 August in Kenya and was convened by the Intergovernmental Authority on Development’s Climate Prediction and Applications Centre (ICPAC) with the support of the World Meteorological Organization (WMO) and other partners.

The key factors which are expected to influence the evolution of regional climate during the September to December 2013 rainfall season include the expected continuation of colder than average Sea Surface Temperatures over western Indian Ocean and warmer than average sea surface temperatures over eastern equatorial Indian Ocean; and anticipated continuation of neutral El-Nino/ Southern Oscillation (ENSO) conditions over the tropical Pacific Ocean.

WMO is promoting the collaborative development of seasonal climate outlooks in many regions of the world as part of its contributions to the Global Framework for Climate Services with an overarching objective to increase the availability of user-friendly climate information for decision makers and local communities.

Rainfall Outlook for September to December 2013