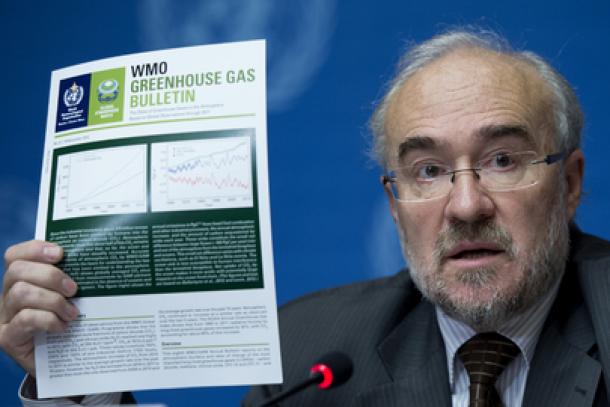 The amount of greenhouse gases in the atmosphere reached a new record high in 2011, according to the World Meteorological Organization. Between 1990 and 2011 there was a 30% increase in radiative forcing – the warming effect on our climate – because of carbon dioxide (CO2) and other heat-trapping long-lived gases.

Since the start of the industrial era in 1750, about 375 billion tonnes of carbon have been released into the atmosphere as CO2, primarily from fossil fuel combustion, according to WMO’s 2011 Greenhouse Gas Bulletin, which had a special focus on the carbon cycle.  About half of this carbon dioxide remains in the atmosphere, with the rest being absorbed by the oceans and terrestrial biosphere.

“These billions of tonnes of additional carbon dioxide in our atmosphere will remain there for centuries, causing our planet to warm further and impacting on all aspects of life on earth,” said WMO Secretary-General Michel Jarraud. “Future emissions will only compound the situation.”

“Until now, carbon sinks have absorbed nearly half of the carbon dioxide humans emitted in the atmosphere, but this will not necessarily continue in the future. We have already seen that the oceans are becoming more acidic as a result of the carbon dioxide uptake, with potential repercussions for the underwater food chain and coral reefs. There are many additional interactions between greenhouse gases, Earth’s biosphere and oceans, and we need to boost our monitoring capability and scientific knowledge in order to better understand these,” said Mr Jarraud.