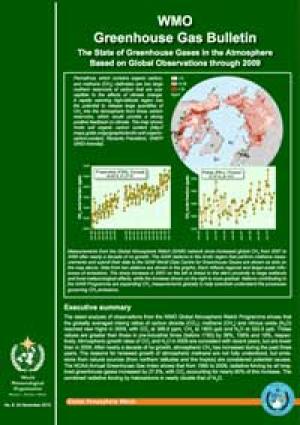 Concentrations of the main greenhouse gases have reached their highest levels recorded since pre-industrial times, according to the World Meteorological Organization’s 2009 Greenhouse Gas Bulletin. The report also highlights concerns that global warming may lead to even greater emissions of methane from Arctic areas.

According to the Bulletin, total radiative forcing of all long-lived greenhouse gases increased by 27.5 per cent from 1990 to 2009 and by 1.0 per cent from 2008 to 2009, reflecting the rising atmospheric burdens of carbon dioxide, methane and nitrous oxide,

“Greenhouse gas concentrations have reached record levels despite the economic slowdown. They would have been even higher without the international action taken to reduce them,” said WMO Secretary-General Mr Michel Jarraud. “In addition, potential methane release from northern permafrost, and wetlands, under future climate change is of great concern and is becoming a focus of intensive research and observations.”