Hazard warnings must reach the last mile, metre - and bucket 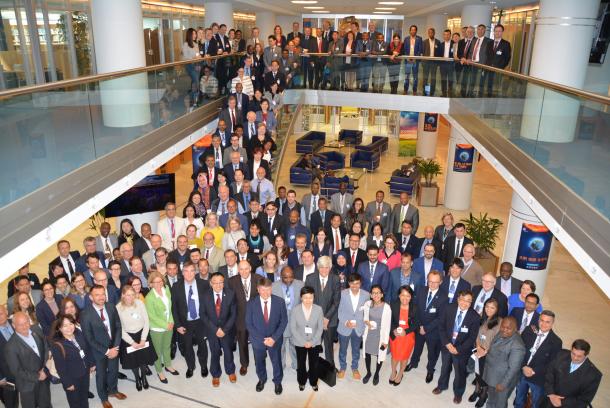 Hazard warnings must reach the last mile, metre - and bucket

The conference focuses on improved warnings – and improved action – in the face of hazards like earthquakes, volcanic eruptions, extreme weather, water and climate events and the interlocking challenges of climate change, population increase, urbanization and environmental degradation.  It is organized by the World Meteorological Organization (WMO) and its partners of the International Network for Multi-Hazard Early Warning Systems (IN-MHEWS).

“Early warning should lead to early action,” said Mami Mizutori, Special Representative of the Secretary-General for Disaster Risk Reduction (UNDRR). Speaker after speaker stressed the need to reach the last mile, the last metre and – for the fishing community – the last bucket.

WMO Secretary-General Petteri Taalas said that the average global temperature has already warmed by about 1°C since the start of the industrial era. More people are exposed to extreme weather – especially heatwaves. There is shrinking ice cover and glacier melt – and associated sea level rise, which leads to more coastal hazards.

“Climate change mitigation is essential for the welfare of coming generations but it is also important to pay attention to climate change adaptation. Early warning systems are a very powerful way to adapt,” said Mr Taalas. He stressed that the need for climate action is becoming increasingly urgent.

The impact of tropical cyclones is becoming more severe. Further global warming towards 2°C is expected to increase the occurrence of strong tropical cyclones of Category 4 or 5 intensity in some parts of the world and lead to a change in their tracks, especially on the southern African coast, said Mr Taalas.

WMO is stepping up meteorological support for UN humanitarian agencies and is working towards a Global Multi-Hazard Alert System. It is committed to the Climate Risk and Early Warning Systems initiative and the Global Framework for Climate Services, which aim to boost resilience, adaptation and sustainable development.

The conference takes place 13 and 14 May. It feeds into the 2019 Global Platform for Disaster Risk Reduction taking place from 13-17 May, also in Geneva. The Global Platform is a biennial multi-stakeholder forum established by the UN General Assembly and convened by the UN Office for Disaster Risk Reduction (UNDRR) with the aim to review progress, share knowledge and discuss the latest developments and trends in reducing disaster risk.

Over the 20-year period between 1998 and 2017, climate-related and geophysical disasters killed 1.3 million people and left a further 4.4 billion injured, homeless, displaced or in need of emergency assistance. While the majority of fatalities were due to geophysical events, mostly earthquakes and tsunamis, 91% of all disasters were caused by floods, storms, droughts, heatwaves and other extreme weather events, according to a report by UNDRR and the Centre for Research on the Epidemiology of Disasters.

“We know that thanks to improvements in early warnings there are many people alive today because of the great progress made in the science and technology behind meteorological services, satellite earth observations, seismic alerts, and a spreading culture of disaster risk management and improved understanding of disaster risk,” said UNDRR’s Ms Mizutori.

“We saw a very vivid example of that just over a week ago as preparations unfolded across the Bay of Bengal in India and Bangladesh for the arrival of Cyclone Fani, a category four storm of great destructive power. India bore the brunt of the storm and is still counting the cost in terms of damage to infrastructure but the early warning systems which are key to the country’s zero casualty policy were highly effective allowing the targeted evacuation of 1.2 million people before the storm made landfall in Odisha,” she said.

But she said that Cyclones Idai and Kenneth, which took such a huge toll on human life in southern Africa last month “tell another story.”

For Cyclone Idai, he said that the community in low-lying areas was caught without flood warnings. There was no contingency plan to deal with an event of such magnitude. The response was too slow and there was a total breakdown in communications and basic services. Beira and surrounding areas received 30% of annual rainfall in a few days. Too much attention was focussed on the fury of the wind, and not enough on the flooding potential of the  torrential rainfall.

Cyclone Kenneth hit an area not used to intense tropical cyclones and so a major challenge was convincing the community to evacuate, he said.

Participants at the conference heard how countries are not doing enough to improve the availability of, and access to, multi-hazard early warnings as well as risk information and assessments. There needs to be accelerated progress towards the key targets of the Sendai Framework for Disaster Risk Reduction 2015-2030, the global plan to reduce disaster losses adopted by UN Member States in March 2015.

The 2019 Global Platform for Disaster Risk Reduction website is here