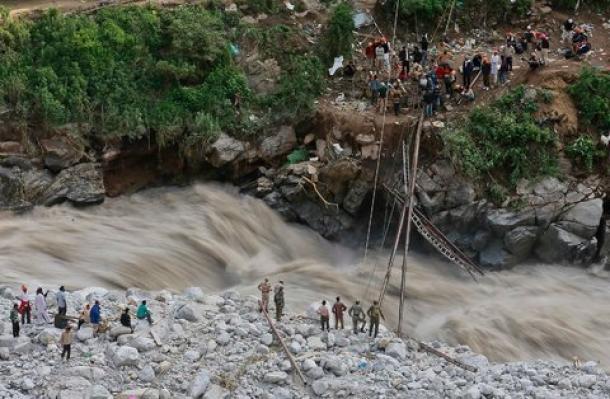 Unusually heavy monsoon rainfall and flooding is affecting India and neighbouring South Asian countries, as well as China and Japan. This has caused major disruption, displacement and loss of life, and once again highlighted the importance of national meteorological and hydrological services in protecting public safety.

The situation is expected to be aggravated by further rain. More than 200mm of rainfall could fall in 24 hours in some mountainous regions of Bhutan/Bangladesh, Northeast India, Myanmar and Nepal according to the South East Asia Flash Flood Forecast System. Additional similar amounts could be possible for the next 4-5 days. Authorities in China are also warning of more rains.

“Challenges posed by the devastating rains and floods in Asia are being complicated by COVID-19. Even though global attention is understandably focussed on the pandemic, this should not distract us from the continuing need for investment in multi-hazard early warning systems to boost resilience, said WMO Secretary-General Petteri Taalas. 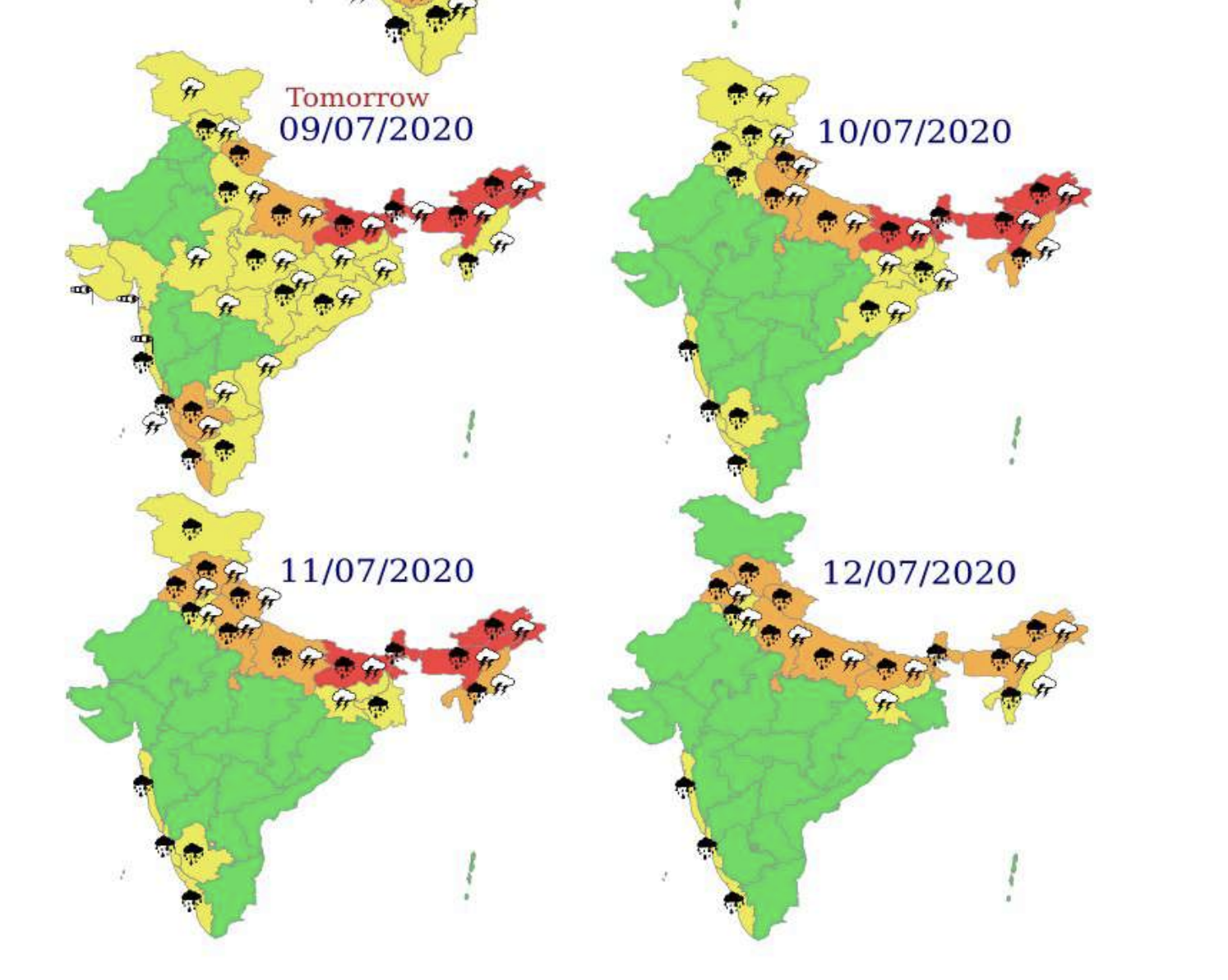 “This is especially true given that climate change is increasing the risk of extreme rainfall events, flooding and coastal inundation,” he said. "WMO and National Meteorological and Hydrological Services will continue to work to protect lives and livelihoods."

The India Meteorological Department has issued top-level red warnings for heavy rainfall  for many north and northeastern Indian sub-divisions for the next 4 days, mainly Assam & Mehghalaya, Arunachal Pradesh, Bihar, and East and West Uttar Pradesh, valid through 12 May.

A number of flood warnings have been issued by the Flood Forecast Center in Bangladesh, where many northern parts of the countries were submerged in late June. The Bhutan National Centre for Hydrology and Meteorology and the Hydrology and Meteorology department in Nepal are also issuing advisories for heavy rainfall, the potential for flash floods and landslides and the risk of rivers breaking embankments.

The South Asian monsoon is the backbone of the regional economy. But in addition to its benefits, it causes loss of life and disruption every year.

Many areas in central and north/northeast India have seen more than 150mm above average monsoon rains so far this year. Tens of thousands of people have been forced out of their homes in the Assam region of India, and there has been coastal flooding in the state of Gujarat.

The warnings of heavy rainfall and flooding in South Asia coincide with an online Flash Flood Guidance System training session from 8-10 July. It was led by the India Meteorological Department, which is the Regional Center of the South Asia Flash Flood Guidance System, and involved more than 100 operational forecasters from 40 IMD sub-offices and from Bhutan, Bangladesh, Nepal and Sri Lanka. 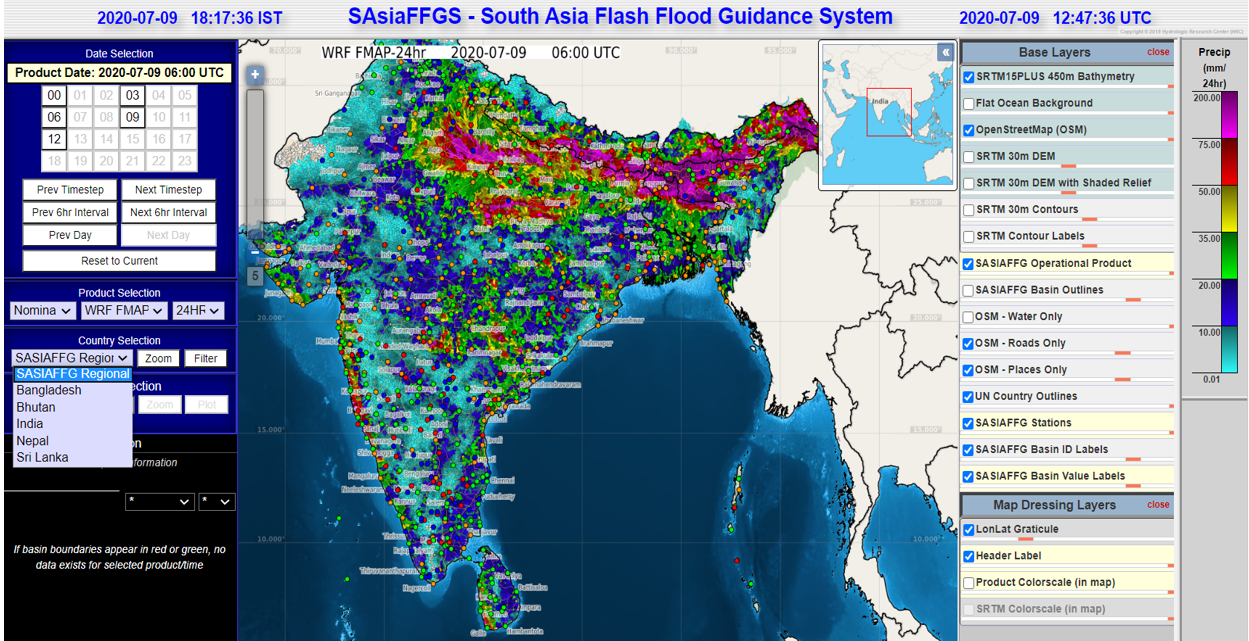 FFGS was developed to improve the capacity of NMHSs to issue flash flood warnings and alerts about a major natural hazard. As of the beginning of 2020, it provides early warnings to three billion people – 40% of the world’s population – across more than 60 countries.

“Thousands of people die in riverine and flash floods. Many of them could be saved by improved early warnings, information about the risks of these sudden-onset events and better water resource management,” Hwirin Kim, Head of WMO Hydrological and Water Resources Services Division, told the training session. 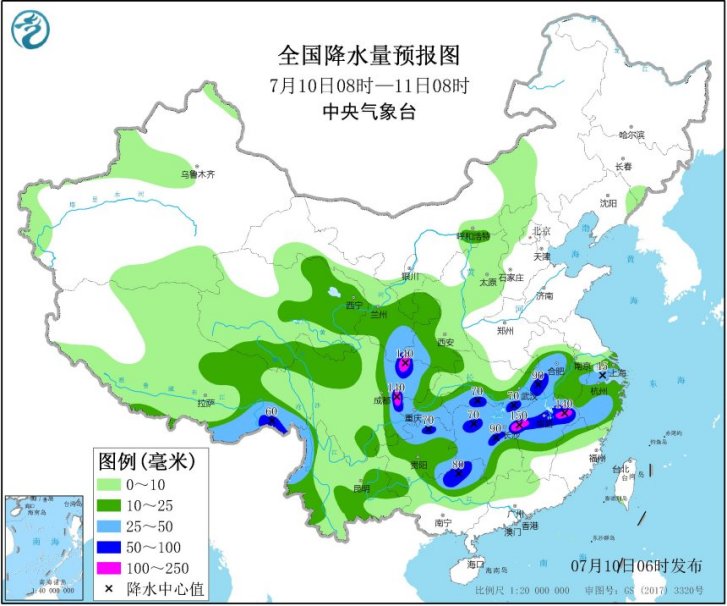 Severe flooding has affected millions of people, with dozens of casualties. Since June, continuous downpours have lashed large parts of southern China, and the waters of many rivers – including the mighty Yangtze river - in the affected regions have exceeded warning levels. Dozens of lives have been lost and there has been major disruption.

The China Meteorological Administration says that until 11 July, rainstorms will still reign over Southwest China, South of the Yangtze River Region, Jianghan Region, and Jianghuai Region, and then move northwards. Heavy downpour will lash northern Jiangxi, northeastern Hunan, and central and northern Sichuan Basin. There will be severe convective weather like short-range heavy rainfall. The hourly intensity will reach 30-50mm.

For more than a week flooding has affected southern parts of Japan, with dozens of reported fatalities and missing people. At least 270,000 people were told to evacuate in four prefectures across Kyushu Island.

The Japan Meteorological Agency continues to issue many warnings and advisories for heavy rain, thunderstorms and ground loosening rain. It has also set up a dedicated multi-lingual portal on the heavy rainfall event.