Heavy rains cause landslides, flooding in Colombia and Peru 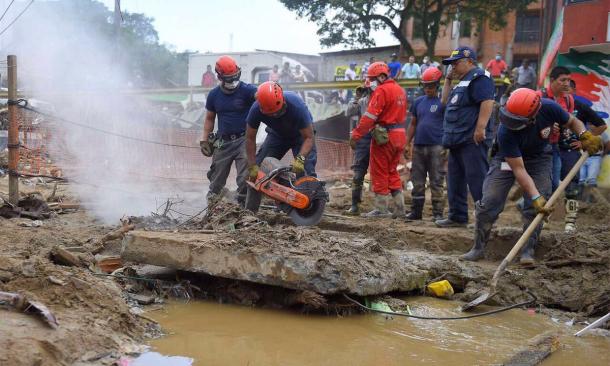 Heavy rains cause landslides, flooding in Colombia and Peru

Heavy rainfall has caused devastating flood and landslides in Colombia and Peru, with heavy casualties, damage to property and infrastructure and economic disruption.

The landslides that began in the early morning of April 1 in the Amazonian region of Colombia were caused by unusually intense rains and by the overflow of the Mocoa, Mulato and Sangoyaco rivers. The town of Mocoa has been almost completely buried, thousands of people have been affected in different municipalities and find themselves without drinking water or electricity, hundreds of homes have been destroyed and the Colombian Government has officially registered 254 dead until 3 April.

Omar Franco, director of the Institute of Hydrology, Meteorology and Environmental Studies of Colombia (Ideam), warned that, as of 3 April, more than 500 municipalities are at risk of landslides. Of these, 182 have already orange to red alert. The causes are diverse and are linked to extreme weather events, combined with deforestation and inadequate and clandestine land use.

Franco explained that March was an atypical month and the rainiest of the last six years. For example, when reviewing precipitation data from the municipality of Mocoa, it was established that the rainfall level reached 129 millimeters. Of these, 80% fell for only three hours, from 11:00 p.m. to 1:00 a.m., which explains in part the tragedy that occurred. This municipality has presented similar levels of precipitation but distributed over 24 hours.

For his part, the director of the Corporation for Sustainable Development for the South of the Amazon, Luis Alexander Mejía, indicated that improper use of the soil aggravates this type of event. Apart from the heavy rains, one of the causes of the avalanche is deforestation. The department of Putumayo precisely became the fifth department of Colombia with more loss of vegetation because 9,000 hectares were deforested until 2015 and the devastation continued to accelerate to obtain arable land not authorized by the Government. Mejía recalled that in this area 15% of the soils already suffer erosion and some 10% severe  erosion. He also recalled that these Amazonian municipalities must update their land management plan.

Ideam invited local authorities and Colombians in general to exercise permanent monitoring over their territory, especially in micro-watersheds, because they can identify the sudden growth of rivers. In Colombia there are more than 700,000 rivers and bodies of water so it is impossible to have monitoring stations in each one of them.

The departments of Antioquia, Cundinamarca, Valle del Cauca, Cauca, Tolima, Putumayo and Nariño represent the greatest risks at this time. In terms of rivers, the main risks are associated with the upper Cauca River and the middle part of the Magdalena River.

"Climate variability and climate change will continue to produce rain and drought," Franco said, adding that Colombian municipalities should review and update their risk maps, "but prevention is the most important thing," he concluded. 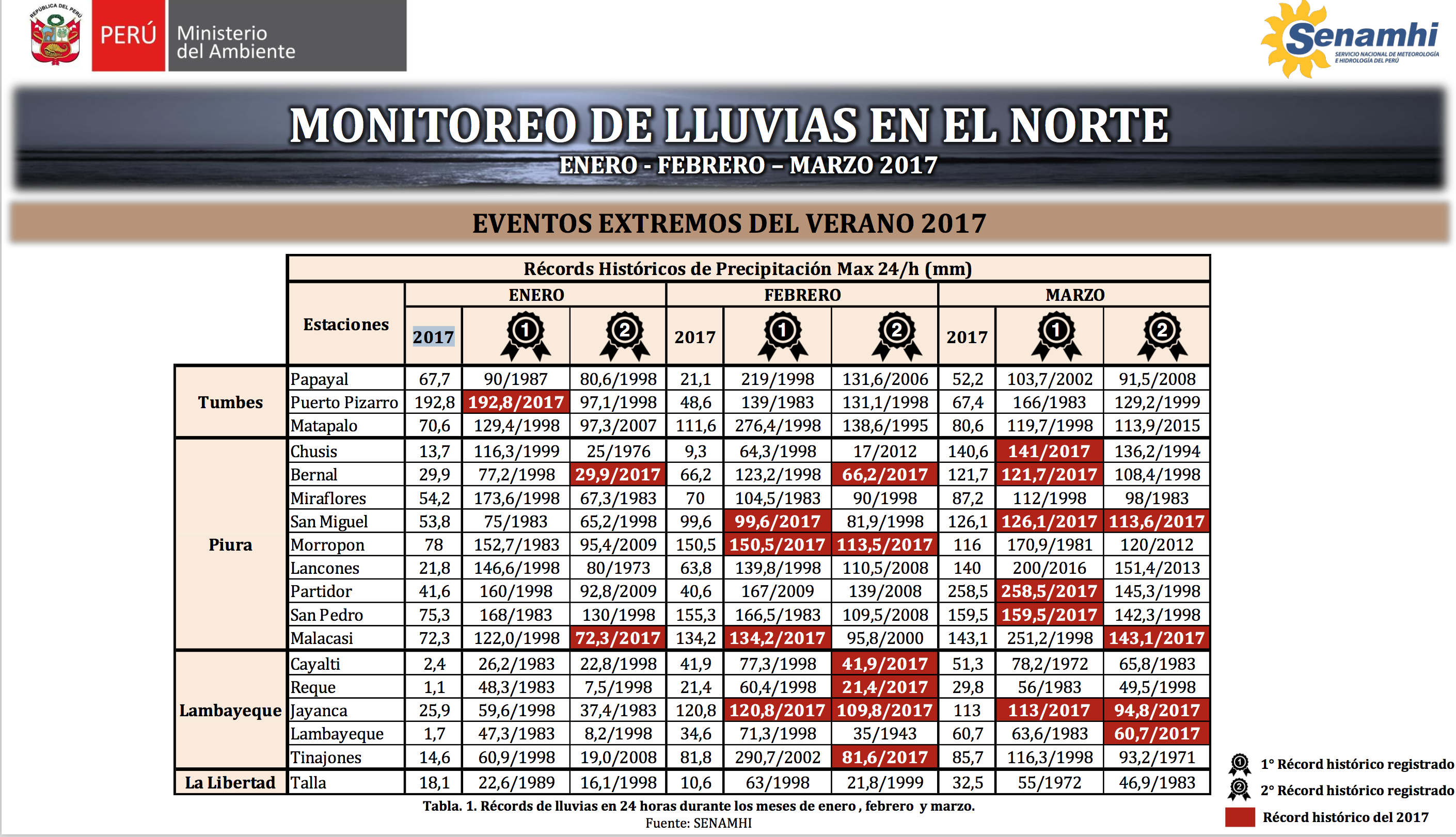 Peru has experienced exceptionally heavy rain during January-March – especially in the month of March. This is linked to a coastal El Niño event, which is impacting Peru and parts of Ecuador. The province of Piura, in northwest Peru, received a record 258.2 mm in the space of 24 hours earlier in March. On March 30, it received its second highest total 147.7 mm.

More than 100 people have died, hundreds of thousands have been impacted and much infrastructure has been destroyed, according to government figures.

The director of the forecasting area of ​​the National Service of Meteorology and Hydrology of Peru (Senamhi), Nelson Quispe, reported that the intense and extraordinary rains that occur in many regions of the country are the result of very high sea temperatures off the coast of Tumbes, Piura, Lambayeque and La Libertad.

In the case of Tumbes, extreme rains were higher than 200 mm per day. In addition, the heavy rainfall in different places on the Peruvian jungle has increased the flow of the Amazon river to the point of turning on the red alert. For example, the National Emergency Operations Center (COEN) indicated that the critical flood level at the Tamshiyacu (Loreto) station is 45,000 m3 /s, while SENAMHI reported in the past days that the flow measurements were already reaching 45,220 m3/s.

El Niño events typically increase rainfall in parts of Peru. The current event is a coastal El Niño with localized impacts rather than a basin-wide event with global impacts. Some models are predicting that a global El Niño will develop later this year, but it is still too early to give precise predictions because we are in the spring “window of uncertainty.” WMO will issue its El Niño Update later in April.

The El Niño phenomenon is characterized by warmer coastal waters off the coast of Peru, and it was first noticed in Peru, when local fishermen reported a drop in their catch of anchovies, which prefer cold water. This year, surface water temperatures in some areas (La Libertad) have been up to 10° Celsius higher than average.

The capital, Lima, is currently experiencing an unusual wave of heat. Nelson Quispe, director of the forecast area of ​​Senamhi, announced that the anomalies are such that if the normal temperature in Lima during the fall is 22° Celsius, the prediction for the next weeks is between 28° and 30° Celsius.

“This is and will be one of the hottest autumns of recent years. When the normal sea temperature rises, the air also responds well. The sea of ​​the northern beaches is warm. Climate change is a reality, a way to manifest itself is when these events like El Niño occur more frequently and more intensely", said Grinia Ávalos, director of climatology at Senamhi.

This "coastal El Niño" is not unprecedented, according to Senhami. A close analog in terms of impacts and development was the year 1925 (Feb-Apr). Both in 1925 and 2017, the local manifestations are very much in line with the original characterization of El Niño in Peru, i.e. coastal warming, extreme rainfall, impacts on the marine ecosystem. The 1925 event did subsequently develop into an event with global impacts.

This has become an important source of confusion to the Peruvian population when assessments from abroad apparently contradict with the local assessments. That is why we were forced to introduce the concepts of the "coastal El Niño" (original concept) and the "central Pacific El Niño" (warm ENSO) and to assess them separately explicitly, as the latter also impacts Peru. 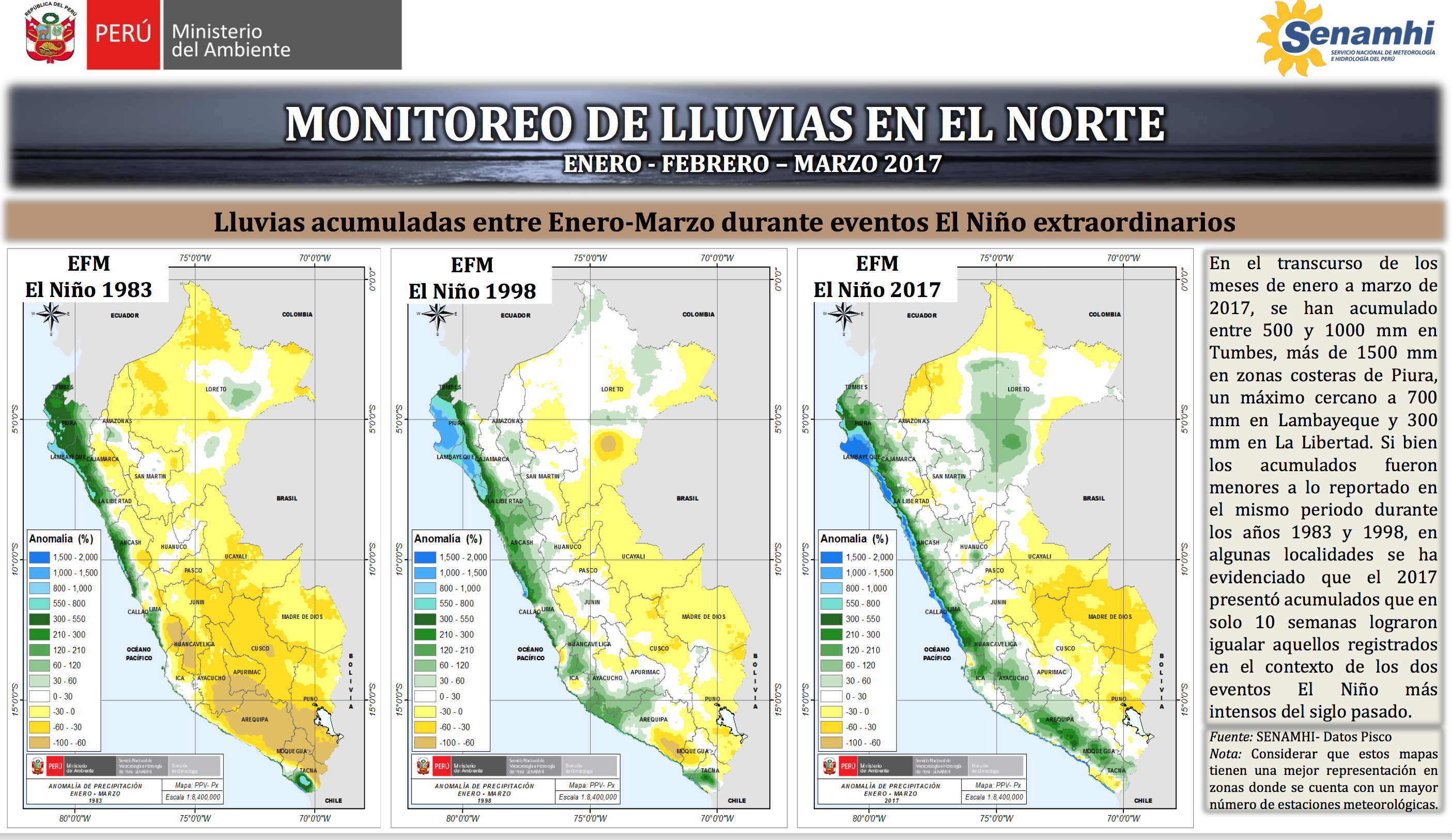