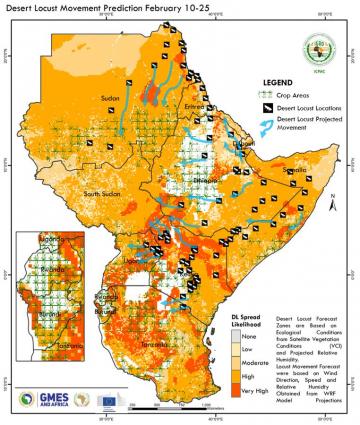 March to May is the main cropping season for many countries in Eastern Africa (most of Kenya, Uganda, Tanzania, southern South Sudan, southern Ethiopia and southern Somalia). The swarms of locusts, which have now spread to eight countries (Kenya, Ethiopia, Somalia, Djibouti, Uganda, Tanzania, Sudan and Eritrea), have been laying eggs along their migratory paths. The eggs are expected to hatch between March and April, posing serious risks to the upcoming cropping season. Desert locusts are expected to continue breeding and spreading during the coming months due to favorable climatic conditions (throughout the March to May rainfall season), as forecasted by the IGAD Climate Prediction & Applications Centre (ICPAC).

In an update issued on 18 February, ICPAC warned that

This is the worst Desert Locust situation in 25 years for most of the affected countries – for Kenya, in 70 years, according to the Food and Agriculture Organization of the United Nations (FAO). Unusual weather and climate conditions have contributed to the spread, including heavy and widespread rains since October 2019. A further increase in locust swarms is likely to continue until June due to the continuation of favourable ecological conditions for Desert Locust breeding.

The Food Security and Nutrition Working Group, co-chaired by FAO and ICPAC,  stated in their recent special report on Desert Locust that “Most affected areas are currently facing Crisis (IPC Phase 3) or Stressed (IPC Phase 2) food insecurity. Some 9.75 million people living in areas affected by desert locusts in Ethiopia, Kenya, and Somalia are currently or projected to be in a food Crisis (IPC Phase 3) or worse”. This upsurge builds on several successive shocks including climatic (consecutive poor seasons characterized by extreme droughts and/or widespread flooding), conflict, and poor macroeconomic conditions. 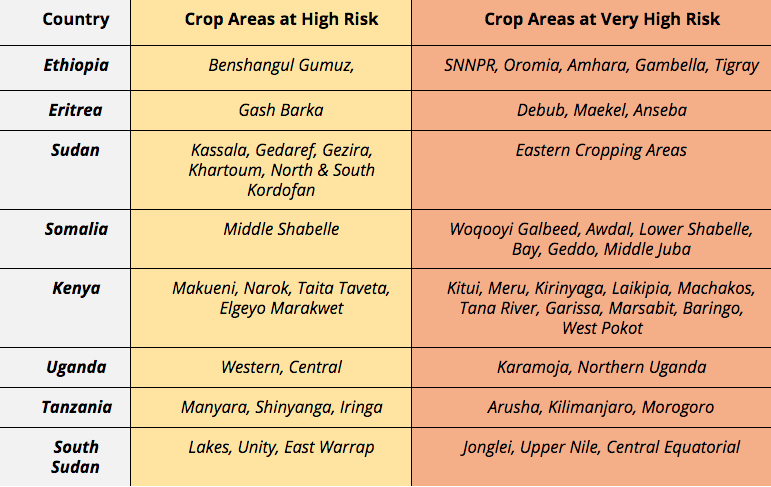 The IGAD Heads of State and Government during their 34th Extraordinary Summit, called for increased coordination given the fact that the locust invasion transcends the IGAD region, affecting also neighboring gulf states and countries in the Arabian Peninsula. “We call upon international and development partners to support the ongoing efforts of IGAD Member States and East Africa to fill in requisite financial, technical and logistical capacity gaps to effectively fight the locust invasion”.

“The heavy rainfall brought by the extreme positive Indian Ocean Dipole (IOD) and the unusual cyclonic activity contributed to the current Desert Locust upsurge. In 2019 the warming of the Indian Ocean led to 8 cyclones, the highest number on record so far, forming in a year over the Indian Ocean. The extreme positive IOD, one of the highest on record, led to one of the wettest October to December rainy seasons in many parts of East Africa. According to recent research, this type of extreme positive IOD events could double in frequency under a scenario of 1.5 °C warming.” said Dr. Guleid Artan, director of ICPAC, which is a WMO Regional Climate Centre.

WMO and FAO have worked together for many years on the Desert Locust issue.

WMO encourages NMHS in the impacted region to assist with providing data and forecasts to the national Desert Locust Control Units.  FAO uses the WMO Global Observing System as input to the Desert Locust Information Unit along with information from other sources.

Forecasts of heavy rain, including forecasts of tropical cyclones making landfall in desert areas, from WMO members provide important information to National Locust Control Centres (NLCC)  for their monitoring and control efforts.  Heavy rain triggers growth of vegetation in arid areas where Desert Locusts can then develop and reproduce.

Meteorologists from WMO Members have since been involved in national Desert Locust programmes.. FAO is the lead agency in Desert Locust monitoring and control and runs the Desert Locust Information Service (DLIS).   In 2016, FAO and WMO jointly produced the "Weather and Desert Locust" publication provides an overview of Desert Locust lifecycle and which weather parameters are needed for

Some recommendations for countries include:

The Desert Locust is the most dangerous of the nearly one dozen species of locusts. It is normally present in the desert areas across 20 countries between West Africa and India, covering nearly 16 million square kilometers. Green vegetation and moist sandy soils are favored for breeding. A typical desert locust swarm can contain up to 150 million locusts per square kilometer. Swarms migrate with the wind and can cover 100 to 150 kilometers in a day. An average swarm can destroy as much food crops in a day as is sufficient to feed 2,500 people and pasture biomass.