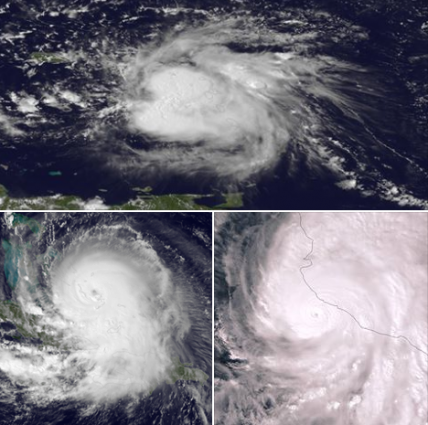 WMO's Hurricane Committee has met to review the 2015 hurricane season in the Atlantic and Eastern North Pacific basins, to prepare for the forthcoming one and to strengthen warnings of hazards such as storm surges and coastal flooding.

The Eastern North Pacific witnessed 9 major hurricanes (above Category 3) in 2015 – the most since reliable records began in 1971. The Accumulated Cyclone Energy (ACE), which measures the combined strength and duration of tropical storms and hurricanes was about 63 percent higher than the 1981-2010 average. The 2015 season in the Atlantic, by contrast, quieter than average.

The Hurricane Committee agreed that it will no longer use the names Erika and Joaquin for future tropical storms or hurricanes in the Atlantic, and the name Patricia will no longer be used in the eastern North Pacific. The three storms occurred in 2015. The WMO will replace Erika with “Elsa”, Joaquin with “Julian” and Patricia with “Pamela” when the 2015 lists are reused in 2021.

The WMO reuses storm names every six years for both the Atlantic and eastern North Pacific basins, unless retired because the storm was so deadly or costly that the future use of the name would be insensitive.

Patricia was the strongest hurricane on record in the Eastern North Pacific basin, with peak winds of 215 miles per hour. It weakened (to category 4 strength) before making landfall in a sparsely populated part of Mexico on 23 October.

Erika was a tropical storm whose torrential rains inflicted significant casualties and damage on the Caribbean island of Dominica. More than a foot of rain fell there and the storm was directly responsible for 30 deaths. Joaquin was the strongest October hurricane to have affected the Bahamas since 1866 and took the lives of 34 people, including the 33 crewmembers of a cargo ship which sank.

The Hurricane Committee covers North America, Central America and the Caribbean. It is one of the five regional tropical cyclone bodies under the WMO Tropical Cyclone Programme.   WMO's Regional Specialized Meteorological Center (RSMC) in Miami is the designated centre for hurricane forecasting advisories to Members in the region. The meeting took place in San Juan, Puerto Rica, USA from 23-26 April.

"In little more than a year, we have seen exceptionally strong – even record-breaking – tropical cyclones in three separate basins,” said WMO Secretary-General Petteri Taalas. Told the opening session of the meeting.

“Cyclone Pam and Cyclone Winston caused devastation in Vanuatu and Fiji. Hurricane Patricia in Mexico was the strongest on record in the eastern North Pacific and, most recently, Cyclone Fantala was one of the most powerful known in the South-West Indian Ocean.”

“We have also seen the occurrence of tropical cyclones in unusual places – for instance Cabo Verde and the Azores, and Yemen.”

"As a result of climate change, rainfall and storm surges associated with tropical cyclones are expected to increase and more people living in big cities near the coast will be exposed. Despite this, we are confident that we can minimize the loss of life due to these extreme events by improved early warning systems. The Hurricane Committee is an excellent model of regional and international cooperation which promotes public safety,” said Mr Taalas.

In reviewing the 2015 season, the Committee examined ways of improving hurricane warning services and coordination for forthcoming seasons.

Reconnaissance aircraft plays an extremely important role in monitoring the track and intensity of tropical cyclones. During the 2015 season, the U.S. Air Force and NOAA Reconnaissance Hurricane aircraft provided valuable meteorological data not available from any other sources. Data from both NOAA and Air Force hurricane hunter aircraft helped to determine the intensity of Hurricane Patricia.

The U.S. National Oceanic and Atmospheric Administration and Servicio Meteorológico Nacional of Mexico reaffirmed the agreement of having a NOAA-P3 reconnaissance plane based in Mexico during the hurricane season to facilitate flights into eastern North Pacific tropical cyclones.

Given that rising sea levels are increasing the risks from storm surges, which kill more people than winds associated with tropical cyclones, RSMC Miami is introducing a Potential Storm Surge Flooding Map in 2016.  The map/data will be issued for areas along the Gulf and Atlantic coasts of the United States. This map shows the height above ground level, in feet, that inundation originating from storm surge could reach.

RSMC Miami provided an update to the Committee of efforts to improve regional storm surge forecasting capacity, and specifically, on progress on a Caribbean Coastal Inundation Forecast Demonstration Project now being tested in Haiti and the Dominican Republic.

Details on naming of tropical cyclones are available here.