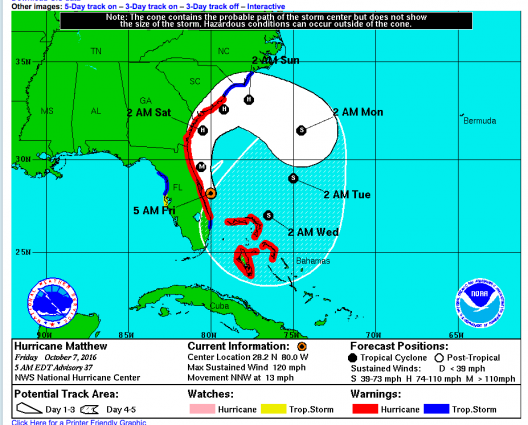 Dangerous Hurricane Matthew continues to bring damaging winds and rainfall, and life-threatening flash floods, mudslides and storm surges as it moves from the Caribbean towards the United States of America, having caused devastation in Haiti, parts of Cuba and the Bahamas.

The United Nations launched a huge humanitarian operation for Haiti, still struggling to recover from the 2010 earthquake. There was unprecedented national mobilization and preparation ahead of Matthew’s landfall, with coordination between Haiti’s meteorological and hydrological services, disaster management authorities and development agencies. This prevented even greater loss of life

As of 0900 GMT on Friday 7 October, Matthew was moving parallel to, and just offshore the East Coast of Florida, according to WMO’s Regional Specialized Meteorological Centre Miami (the U.S. National Hurricane Center).

“Matthew is likely to produce devastating impacts from storm surge, extreme winds, and heavy rains along extensive portions of the east.central and northeast coast of Florida today,” said the US National Hurricane Center.

When a hurricane is forecast to take a track roughly parallel to the coastline, as Matthew is forecast to do from Florida to South Carolina, it is very difficult to specify impacts at any one location. Only a small deviation of the track to the left could bring the core of a major hurricane onshore. Modest deviations to the right could keep much of the hurricane-force winds offshore, cautioned the National Hurricane Center, which acts as WMO’s Regional Specialized Meteorological Centre.

Hurricane Matthew as seen from the International Space Station (NASA) 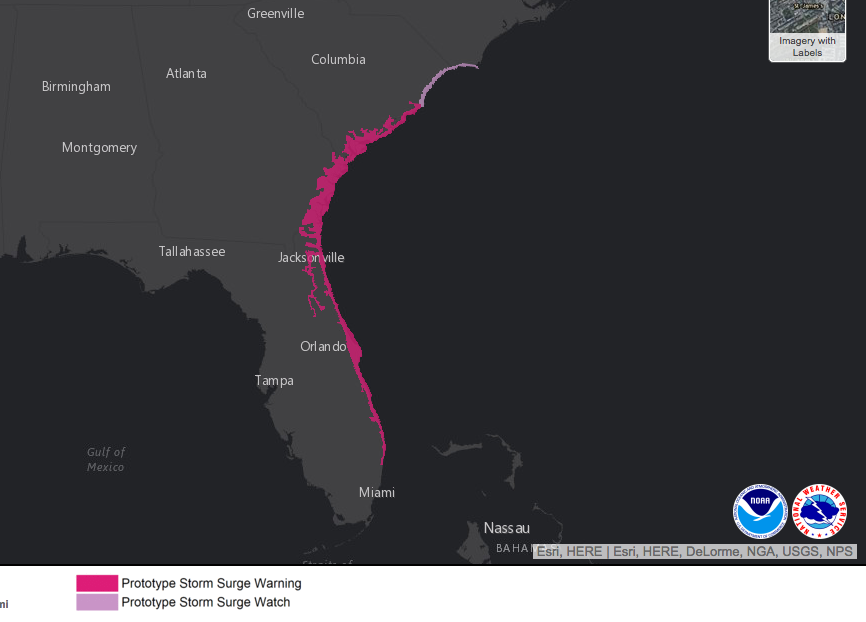 Matthew is expected to produce total rain accumulations of 8 to 12 inches over the Atlantic coast of the United States from central Florida to eastern North Carolina. This rainfall may result in flooding and flash flooding.

In addition to the destructive winds and flash floods from the equivalent of months worth of rainfall falling in a matter of hours, the U.S. National Hurricane Center warned against dangerous storm surges.

Surge-related flooding depends on the relative timing of the surge and the tidal cycle, and can vary greatly over short distances. Large waves generated by Matthew will cause water rises to occur well in advance of and well away from the track of the center.  The combination of a dangerous storm surge and the tide will cause normally dry areas near the coast to be flooded by rising waters moving inland from the shoreline.  There is a danger of life- threatening inundation during the next 36 hours along the Florida east coast, the Georgia coast, and the South Carolina coast from Deerfield Beach, Florida to Edisto Beach, South Carolina, according to the National Hurricane Center.

Matthew was the first Category 4 hurricane to make landfall in Haiti since 1963, when Hurricane Flora claimed the lives of more than 6,000 people.

The death toll in Haiti continued to mount on Friday, but precise figures were uncertain because of the sheer scale of damage and disruption to communications, especially in the west of the country. The capital, Port au Prince, was not as severely affected as western areas. Photos and video footage from Haiti and affected parts of Cuba showed scenes of utter devastation.

WMO has been working to rehabilitate the National Meteorological and Hydrological Service, which was destroyed by the 2010 earthquake. Haiti has benefited from great support from other meteorological services, especially from the USA, France, Canada and other Caribbean countries. This enabled the diffusion of timely hurricane warnings as Matthew approached.