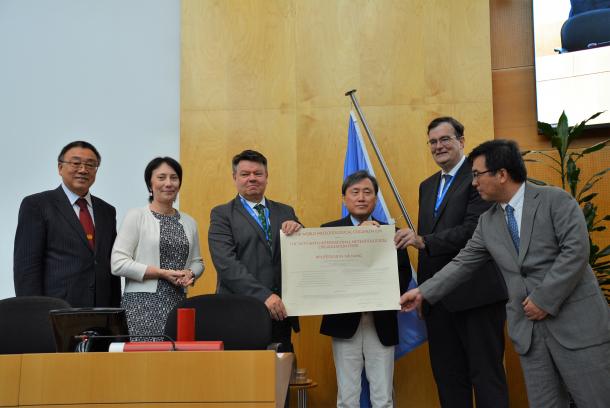 The winner of the World Meteorological Organization’s most prestigious award has called for an international centre for climate modelling and prediction, saying that this is vital for leveraging scarce financial and human resources.

The IMO Prize (named after WMO’s predecessor, the International Meteorological Organization) is the highest scientific award of WMO. It rewards outstanding work in meteorology and hydrology and contributions to international collaboration in these two fields. WMO’s Executive Council hailed Prof. Kang as “an outstanding climate scientist whose contributions to operational and research climate centres have been invaluable.”

The award cited his major scientific achievements in the areas of climate modelling and prediction, and climate dynamics related to ENSO (EI Niño-Southern Oscillation) and MJO (Madden–Julian Oscillation) and teleconnection,

Prof. Kang said that climate modelling needs a special attention in society. Innovate improvement requires a huge amount of resources. Most importantly, the future manpower problem is at a critical level, he said.

He said his hope was that WMO would initiate what he called a time machine project -  an International Centre for Climate Modelling and Prediction.

“There are several international programmes and institutions in the physics, such as the accelerator programme CERN in Switzerland and the international fusion centre in Paris, which spend billions of dollars every year,” he said.

“Although these programmes are important for future energy, the global warming and climate change is probably more important than any other issues in the global community. That’s the reason why we our climate community should ask the global society to support our effort to improve the climate model for better assessment,” he said.

“The international climate modelling centre would probably need a couple of hundred million dollars per year, but such funding is not big money, when considering its importance in global society, particularly for urgent assessment and preparation for the future climate change. This spending could be easily justified and secured in the international community, not only from many nations but also from big companies,” said Prof. Kang.

Prof. Kang has a long history of working with the international climate community, serving as a member of various panels of the World Climate Research Program (WCRP) and has also been a member of WCRP Joint Science Committee (JSC) spanning from 2013 and 2018. In 2018, Prof. Kang was specially awarded with a Foreign Expert Award by the Chinese Government,” Prof. Taalas told the award ceremony.

“Apart from his scientific achievements, in the fields of climate modelling and prediction, Prof. Kang has made a life-long commitment to educating younger generations of the weather and climate science community. As a professor at Seoul National University, he has inspired many prominent next-generation scientists throughout the world, starting in his homeland of the Republic of Korea, as well as in the USA, India, Pakistan, Bangladesh, Egypt, Saudi Arabia, China, and some countries in Africa,” said Prof. Taalas.

Prof. Kang has published more than 170 papers in SCI (Science Citation Index) Journals with some 10,000 citations based on the Google Citation Index.

In 2017, Prof. Kang was awarded the Medal of Education by the Korean Government and has been recipient of numerous awards throughout his career, a career which has been instrumental in raising the profile of climate science impacts and inspiring future innovators in this field.

The IMO Prize was established in 1955. It consists of three elements: