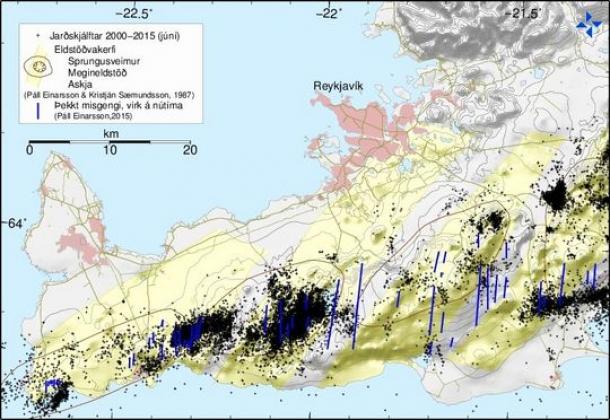 Information on recent earthquake activity in the eastern Reykjanes peninsula

In recent weeks, increased seismic activity has been detected on the Reykjanes peninsula, including a M4 earthquake in late May close to lake Kleifarvatn, which was felt widely in the capital region. Following such earthquakes, stress conditions in the shallow crust can be changed in the surrounding region.

An analysis of micro-earthquakes in the region indicates possible instabilities in the crust between lake Kleifarvatn (Krísuvík) and Ölfus (the region of the 2008 earthquakes, close to Hveragerði). Deformation measurements in recent years also indicate possible stress accumulations in the region, which might be released as a larger earthquake. Historic recordings show that earthquakes in that region can be up to M6.5. The last earthquakes of M>6 were in 1929 and 1968. Both of these events caused no major damage in the capital area. In modern times, however, urban settlements have spread closer to historically active earthquake faults.