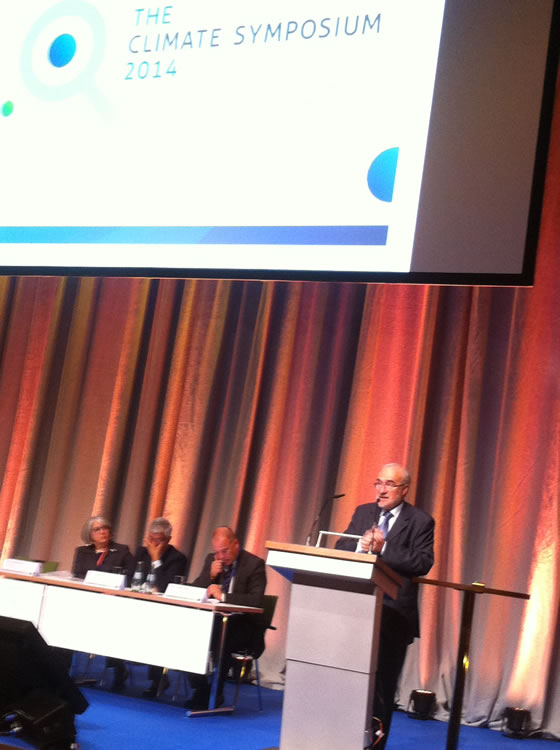 This week, nearly 500 climate experts, policy makers and representatives from space agencies and industry will join in the debate to identify how observations from current and future satellites will address the grand research challenges identified by the World Climate Research Programme (WCRP).

EUMETSAT Director-General Alain Ratier said, “After the publication of the Fifth Assessment Report of the IPCC and one year before the next Conference of the Parties to the UN Framework Convention on Climate Change, our purpose is to bring together scientists and space agencies to connect satellite observations to the climate challenges we are facing. This means not only to understand climate change but also to establish on the best possible scientific foundation the climate information services expected by decision makers.”

The symposium will provide new inputs to the design of the global architecture for climate monitoring from space being established by the Committee on Earth Observation Satellites(CEOS) and the Coordination Group for Meteorological Satellites, in response to the needs of the World Meteorological Organization, the Global Framework for Climate Services(GFCS) and the Global Climate Observing System (GCOS).A number of high level speakers will open the symposium, including Ms Brigitte Zypries, German State Secretary for Economic Affairs and Energy, Mr Klaus-Peter Willsch, Chairman of the Aviation and Space Group in the German Parliament, Mr Michel Jarraud, Secretary-General of the WMO, and Ms Barbara Ryan, Director of theGroup on Earth Observations (GEO). Further key addresses will be given by David Carlson, Director of the WCRP, and Julia Slingo, Chief Scientist at the Met Office (UK).

"When we look at climate change adaptation, at the information needs it entails, we realize the invaluable and growing contribution of space-based Earth observation and the potential for an even greater one in the future. This opportunity goes hand in hand with a structural challenge," said Mr Jarraud.

"Observations from space can already provide global records of some of the essential climate variables defined by the Global Climate Observing Programme (GCOS) over several decades. However, at the moment, no space observing system in place is designed to meet the long-term requirements of climate monitoring through satellites. In addition, many of the archived satellite raw datasets covering the past three to four decades - thus providing a unique heritage describing the changing Earth - are not optimally used for climate studies since they have not yet been reprocessed," he said.

"Such challenges can be overcome," said Mr Jarraud.

The Climate Symposium 2014 is organised by the WCRP and EUMETSAT, with the support of the European Union, the European Space Agency, and the City of Darmstadt. Other sponsors are GFCS, GEO, JAXA, DLR, NOAA, CNES and NASA.