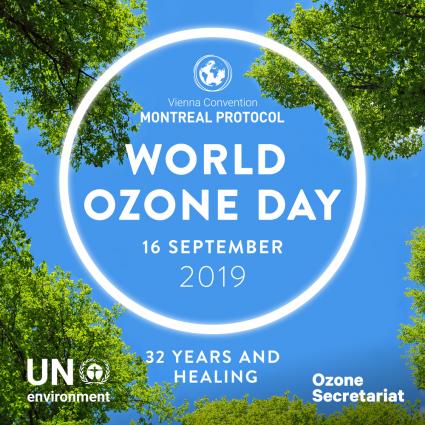 On this year’s International Day for the Preservation of the Ozone Layer, WMO highlights the coordinated efforts to measure and analyze ozone layer through its Global Atmosphere Watch network in support of environmental policy.

September 16 marks the anniversary of the Montreal Protocol on Substances that Deplete the Ozone Layer and celebrates the progress in protecting the ozone layer and moves to phase out ozone depleting chemicals which are also potent greenhouse gases.

“The Montreal Protocol is both an inspirational example of how humanity is capable of cooperating to address a global challenge and a key instrument for tackling today’s climate crisis,” said United Nations Secretary-General António Guterres.

“Under this international treaty, nations have worked for 32 years to slash the use of ozone-depleting chemicals, used largely by the cooling industry.  As a result, the ozone layer that shields us from the sun’s harmful ultraviolet radiation is healing.

“The Montreal Protocol can deliver an equally significant result on climate change through its Kigali Amendment, which targets hydrofluorocarbons, powerful climate-heating gases still used in cooling systems.  Phasing these out could reduce global warming by up to 0.4°C this century.  As industry redesigns appliances to replace hydrofluorocarbons, it is also essential to improve their energy efficiency to further reduce their impact on the climate,” he said.

This year’s theme is 32 Years and Healing.

The latest Scientific Assessment of Ozone Depletion shows that the ozone layer in parts of the stratosphere has recovered at a rate of 1-3% per decade since 2000. At projected rates, Northern Hemisphere and mid-latitude ozone is scheduled to heal completely by the 2030s followed by the Southern Hemisphere in the 2050s and polar regions by 2060.  The 2018 assessment was conducted under the sponsorship of WMO and UN Environment.

WMO’s Global Atmosphere Watch Programme, which embraces about 100 countries, provides information on the ozone layer to inform decision-makers and support environmental policy. For the past 30 years, GAW has coordinated high-quality atmospheric composition observations across local to global scales to drive high-quality science and promoting a new generation of research-enabled products and services.

WMO wants to recognize the anniversaries of two organizations for their contribution to long-term ozone observations.

The Royal Meteorological Institute of Belgium marks its 50th anniversary of ozone measurements at Uccle. The operational ozonesonde programme in Uccle started in January 1969, with a launch frequency of three times a week, year around. During 50 years more than 6800 ozonesondes were launched and collected data on the vertical distribution of ozone. Such long time series are required to enhance the understanding of atmospheric processes and to identify trends.

Deutscher Wetterdienst celebrates the 20th anniversary of the Regional Dobson Calibration Centre for Europe, hosted at the GAW Global station Hohenpeißenberg. Dobson spectrophotometers measure the thickness of the ozone layer. The success of this WMO/GAW Dobson calibration system is evident from the significant drop of the relative differences since the mid-eighties, when regular intercom­parisons were started, between the Dobsons to the reference instruments when compared before calibration. This supports global efforts to achieve harmonized high quality observations.

This year's ozone hole is expected to be one of the smallest for years because of a meteorological event known as sudden stratospheric warming, according to the Copernicus Atmospheric Monitoring Service.

“This year, we have seen that the ozone hole has been particularly unusual,” explains CAMS Senior Scientist, Antje Inness. “Although it started growing relatively early, at the beginning of September a sudden warming of the stratosphere disturbed the cold polar vortex that gives rise to the ozone hole.”

When the stratosphere warms in such a way the amount of polar stratospheric clouds is reduced and less ozone is depleted. Also, the polar vortex is more disturbed than usual (this year it was moved from the pole towards South America) and more mixing occurs with ozone richer air from outside the vortex. As a result, the ozone hole is weaker.

“The ozone hole has been stabilising over the last few days, but our forecasts show it will remain small this week and we expect that this year’s ozone hole will be one of the smallest holes that we’ve seen since the mid-eighties,” concludes Inness.