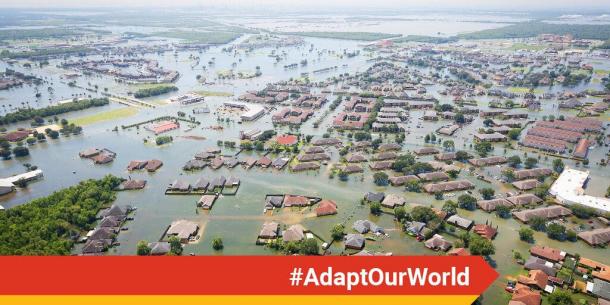 Investing in climate services and early warning systems is critical if countries and communities are to meet the challenge of climate change, the World Meteorological Organization’s Secretary-General Petteri Taalas said today as the Global Commission on Adaptation launched a landmark report on the economic benefits of action.

The report has been published ahead of the 2019 Climate Action Summit convened by UN Secretary-General António Guterres on 23 September in New York to boost ambition and accelerate efforts to implement the Paris Agreement on Climate Change.

“It’s highly important that we start mitigating climate change and aim at reaching the Paris targets between 2 and 1.5 degrees Celsius,” said Mr Taalas, referring to the temperature increase limits set out on the 2015 Paris Agreement, which seeks to rein in global warming by curbing greenhouse gas emissions from industry, energy production, transport and other sources.

“But besides that, it’s highly important that we start paying a growing amount of attention to adaptation, and that’s why the Global Commission on Adaption was established. We are fully behind the goals of this commission and, for us, a very powerful way to adapt to climate change is to invest in early warning services,” he said.

The Global Commission on Adaptation, created in October 2018, brings together leaders from politics, business, multilateral organizations, and science to identify solutions and drive action, and counts Mr Taalas among its 34 members.

It is led by Ban Ki-moon, former Secretary General of the United Nations, Bill Gates, co-chair of the Bill and Melinda Gates Foundation, and Kristalina Georgieva, the chief executive of the World Bank, who is currently on leave of absence from that post following her nomination as a candidate for the role of managing director of the International Monetary Fund.

The commission’s report sets out a vision to greater resilience to weather and climate hazards – such as floods and storms – which, without climate services and early warning systems, risk turning into economically-damaging disasters.

It finds that adaptation can produce significant economic returns: the overall rate of return on investments in improved resilience is high, with benefit-cost ratios ranging from 2:1 to 10:1, and in some cases even higher.

Specifically, the analysis finds that investing US$1.8 trillion globally in five areas from 2020 to 2030 could generate US$7.1 trillion in total net benefits. Besides early warning, these areas are climate-resilient infrastructure, improved dryland agriculture, mangrove protection, and investments in making water resources more resilient. These areas represent only a portion of the total investments needed and total benefits available.

It also calls for adaptation that addresses underlying inequalities in society and brings more people, especially people most vulnerable to climate impacts, into decision making. The reality is that those most affected by climate change did the least to cause the problem – making adaptation a human imperative. Without action, it says, millions of people will be pushed further into poverty, leading to increased conflict and instability.

“Climate change doesn’t respect borders: it’s an international problem that can only be solved with co-operation and collaboration, across borders and worldwide. It is becoming increasingly clear that in many parts of the world, our climate has already changed and we need to adapt with it,” said Ban Ki-Moon. “Mitigation and adaptation go hand-in-hand as two equally important building blocks of the Paris Climate Change Agreement. Adaptation is not only the right thing to do, it is also the smart thing to do to boost economic growth and create a climate resilient world.”

Bill Gates echoed those comments, saying: “People everywhere are experiencing the devastating impacts of climate change. Those most impacted are the millions of smallholder farmers and their families in developing countries, who are struggling with poverty and hunger due to low crop yields caused by extreme changes in temperature and rainfall. With greater support for innovation, we can unlock new opportunities and spur change across the global ecosystem. Adaptation is an urgent issue that needs support from governments and businesses to ensure those most at risk have the opportunity to thrive.”

Given their importance to the overall success of climate adaption, Mr Taalas underlined that around a hundred of WMO Members — 193 national and territorial meteorological and hydrological services around the globe — do not have effective climate services or early warning systems.

“This means that when disasters are hitting those countries, the impacts of climate change are causing more damage than in those countries where we have proper services,” he said. “From WMO’s side, we are committed to work for such a challenge and improve the service capability of our less developed countries like in Africa, Caribbean and Pacific Island states and also several other parts of the world.”

And the Global Framework for Climate Services, or GFCS, a global partnership spurred by WMO, is providing structured and coherent framing of the science, data and capacities required to develop the information and services needed to support climate adaptation and mitigation. It is part of efforts to meet the range of internationally-agreed objectives adopted by the international community since 2015 in an interlocking series of accords, including the Sustainable Development Goals, the Paris Agreement on climate change, Sendai Framework for Disaster Risk Reduction, the New Urban Agenda, and the Agenda for Humanity.

"We look forward to working with our Members and partners to ensure the best available science meets the demands of those most in need in a format that enables action,” said Mr Taalas.

In addition, WMO hosts the secretariat of the Climate Risk and Early Warning Systems initiative, known for short as CREWS, which focuses on least developed countries and small island developing states. WMO also implements US$20 million of CREWS funds across 40 countries, strengthening their early warning capacity.