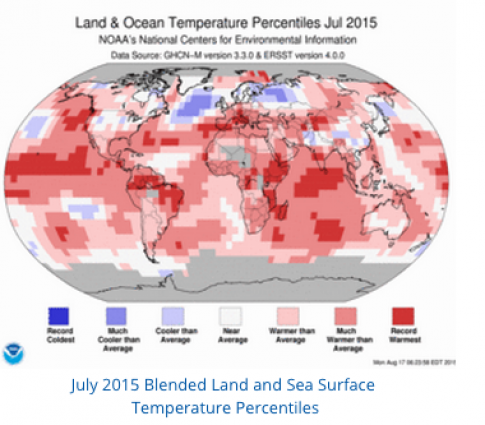 The combined globally averaged temperature over land and ocean surfaces for January to July 2015, and for the month of July, was the highest on record for the period, driven by continuing high sea surface temperatures, according to the U.S. National Oceanic and Atmospheric Administration.

The average temperature for Africa was the second highest for July on record, behind only 2002, with regional record warmth across much of eastern Africa into central areas of the continent. Record warmth was also observed across much of northern South America and central Asia, and the far western United States. Large parts of central and southern Europe were gripped by a heatwave.

For the oceans, the July global sea surface temperature was 0.75°C (1.35°F) above the 20th century average of 16.4°C (61.5°F), the highest departure not only for July, but for any month on record. The 10 highest monthly departures from average for the oceans have all occurred in the past 16 months (since April 2014).

Related to the current El Niño conditions, sea surface temperatures during July were close to 1.0°C (1.8°F) above the 1981–2010 average in the central equatorial Pacific Ocean, and more than 2.0°C (3.6°F) above average across the eastern Pacific, according to an analysis by the NOAA Climate Prediction Center.

WMO uses a combination of data sets to compile its annual Statement on the Global Climate. The provisional statement for 2015 will be released in November 2015.

The JMA Tokyo Climate Center can be viewed here: http://ds.data.jma.go.jp/tcc/tcc/products/gwp/temp/jul_wld.html