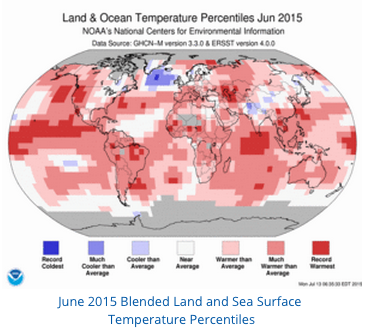 The globally averaged temperature over land and ocean surfaces for January to June 2015, as well as for the month of June, was the hottest such period on record, according to the U.S. National Oceanic and Atmospheric Administration (NOAA). 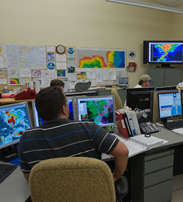 June 2015 marks the third month this year that has broken its monthly temperature record, along with March and May. The other months of 2015 were not far behind: January and February were each second warmest for their respective months and April was fourth warmest.

The average Arctic sea ice extent for June was 350,000 square miles (7.7 percent) below the 1981-2010 average and 60,000 square miles larger than the smallest June sea ice extent on record that occurred in 2010. This was the third smallest June extent since records began in 1979 according to analysis by the National Snow and Ice Data Center using data from NOAA and NASA.

WMO uses a combination of datasets to compile its annual Statement on the Global Climate. The provisional statement for 2015 will be released in November 2015.