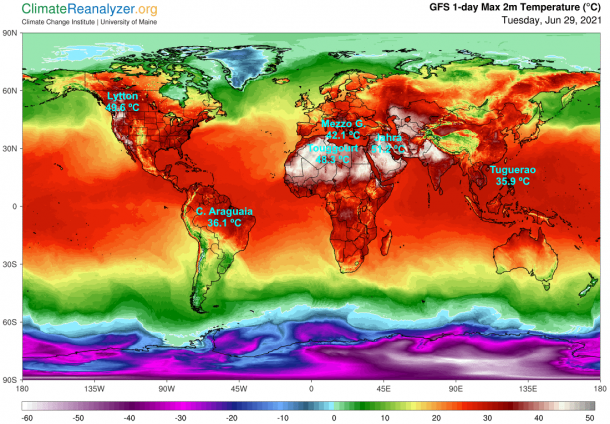 An exceptional and dangerous heatwave is baking the Northwestern USA and Western Canada in areas which are more synonymous with the cold. Temperatures have reached more than 45.0°C on consecutive days, with extremely warm nights in between.

This unprecedent event has caused many fatalities and is having multiple major impacts:  heat stress in people, animals and vegetation; air quality (pollutants due to hot stable air); forest fire risk; possibility of landslides caused by glacier melting in mountains; damages and malfunctioning of infrastructure and transport systems not prepared for such high temperatures; and many other social and economic risks.

National and local meteorological services have issued many heat warnings and advisories and it is to be hoped that heat-health early warning services will limit the death toll.

So many records have been broken that it is difficult to keep track.

The all-time Canadian record was broken on Sunday, with Lytton in British Columbia recording 46.6°C (1.6°C higher than the previous record set on 5 July 1937). Less than 24 hours later, Lytton broke this record again, reaching 47.9°C on Monday. It then broke it for a third time on 29 June with a temperature of 49.6°C. On 1 July, the village was engulfed by wildfire, destroying nearly all its structures and forcing the evacuation of the entire population. It was unclear if there were casualties.

The temperature record surpassed Las Vegas' all-time record high of 117°F/47.2°C. British. The heat is more typical of summer temperatures in the Middle East than a province which is home to the Rocky Mountains and Glacier National Park. There is a consequent risk of high glacier melt.

The province of British Columbia broke 43 all-time records as of 28 June, with more expected to tumble.

Armel Castellan is a meteorologist with Environment and Climate Change Canada. He said: We are not done with this yet.

“The North West Territories have recorded their all-time highest temperatures not just in June, but any point in the year.  We are setting records that have no business in being set so early in the season.”

“Overnight lows being higher than our average daytime highs for late June is a really big deal. Our bodies need to cool off and recover before taking on another day of high temperatures. Another thing to think about is the infrastructure.

“Fewer than 40 per cent of homes have air conditioning on the coast, people are having to go to libraries and shopping malls to find a couple of hours of air conditioning. I have been sleeping in a tent to get some respite from the heat,” Mr Castellan said in a UK Met Office podcast.

From California and Nevada into the Northwest and east into Montana, over 14 million Americans remain under either excessive heat warnings, watches or heat advisories in the West.

The heat is being caused by a combination of a significant atmospheric blocking pattern which has led to a heat dome, with low pressure either side, and which is not being moved along by the jet stream.

This heat wave comes on the heels of another historic heat wave less than two weeks ago that baked the U.S. Desert Southwest and California with hundreds of record highs. 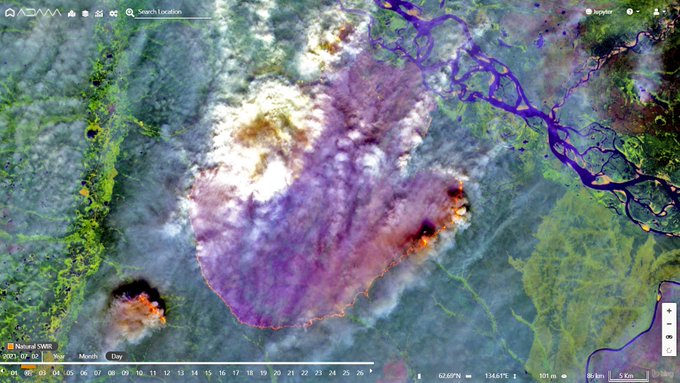 “Heatwaves are becoming more frequent and intense as greenhouse gas concentrations lead to a rise in global temperatures. We are also noticing that they are starting earlier and ending later and are taking an increasing toll on human health,” said Omar Baddour, Head of WMO’s Climate Monitoring and Policy Division.

Nikos Christidis is a climate scientist with the UK’s Met Office. He said: “Without human-induced climate change, it would have been almost impossible to hit such record-breaking mean June temperatures in the Western United States as the chances of natural occurrence is once every tens of thousands of years. In the present-day climate getting an extremely hot June is common and is likely to occur twice in three decades. However, an analysis from many computer models suggests that by the end of the century these extreme temperatures are more likely than not. Human influence is estimated to have increased the likelihood of a new record several thousand times,” he said.

Climate-related risks to health, livelihoods, food security, water supply, human security, and economic growth are projected to increase with global warming of 1.5 °C and increase further with 2 °C. Limiting warming to 1.5 °C rather than 2 °C could result in 420 million fewer people being exposed to severe heatwaves, it said.

In 2018, vulnerable people over the age of 65 experienced a record 220 million more heatwave exposures, than the average for the baseline of 1986–2005, according to WMO’s report on the State of the Global Climate in 2019.

The WMO and World Health Organization Joint Office on Climate and Health works actively to protect people’s health from this major hazard. WMO is one of the founding partners of the Global Heat-Health Information Network.