June was "3rd warmest on record" 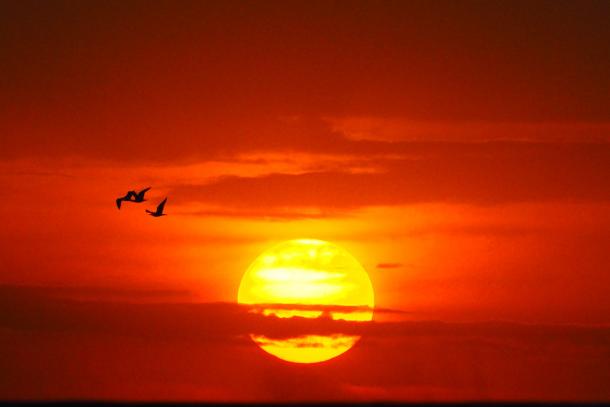 June was "3rd warmest on record"

The globe just had the third warmest June on record, according to Europe’s  Copernicus Climate Change Service, with widespread episodes of extreme heat. Antarctic sea ice was the lowest on record for the month of June.

The monthly report by Copernicus/ECMWF (European Centre for Medium Range Weather Forecasts)  is part of international network of climate monitoring activities by the WMO community which underpin WMO’s State of the Global Climate reports.

The monthly mean temperature for Europe was the second highest on record. Southern parts of the continent from the Iberian Peninsula across France and into Italy most affected. Daily maximum temperatures in Spain, France, and Italy soared above 40°C and the extreme heat exacerbated the ongoing drought conditions in the Po river basin.

This heat also extended across North Africa, where Tunisia equalled its monthly temperature record. Also, at Banak in northern Norway, a daily maximum temperature of 32.5°C was recorded, which if confirmed, would be a new June record for the county in which it is situated.

Above-average temperatures were also found across Siberia and large parts of Asia, where heatwaves in central and northern China led to increased electricity demand. Temperatures of greater than 35°C were recorded for five days in a row in Tokyo, Japan, which is a record. In North America, high temperatures occurred in Texas, with Houston having its hottest June on record; San Antonio suffered from this extreme heat too. The Middle East also saw above-average temperatures.

In June 2022, a large part of Europe experienced lower-than-average precipitation, including over the UK, Ireland, Italy, much of the Iberian Peninsula and over a large region stretching from the northern Balkans across eastern Europe and over north-western Russia. In the Po Valley, in northern Italy, the continuing drought is affecting river transport, agriculture and energy management. Conversely, precipitation was higher than average over most of France, Iceland, regions of central Europe, western Russia, the southern Balkans and Turkey, according to the Copernicus Hydrological Bulletin.

The Deutscher Wetterdienst, which is one of WMO’s regional climate monitoring centres, conducted a detailed analysis of the drought which, in some parts, dates back to winter.

In the central Mediterranean region, spring was the fourth driest since 1901, in Germany almost all springs since 2009 have been too dry.

"Drought might also prevail for the next three months in large parts of Europe, " it said. In the long term, depending on the extent of future global warming, precipitation in the Mediterranean region will decrease. In summer, there is a risk of drought spreading to Central and especially Western Europe in the future.

Temperatures in June were much higher than average over large parts of Antarctica.

Antarctic sea ice extent reached 12.6 million km2 on average, 1.2 million km2 (9%) below the 1991-2020 average for June. This is the lowest extent for June in the 44-year satellite data record and is marginally lower than the value for June 2019 (second-lowest), according to the Copernicus report.

It is noteworthy that 2019 and 2022 were separated by near-average June values in 2020 and 2022, highlighting the large interannual variability that has often characterised the Antarctic sea ice data record since 1979.