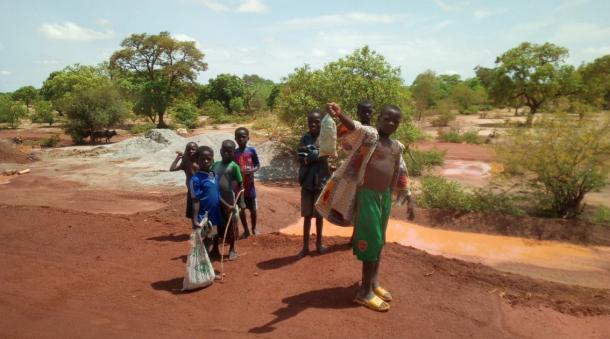 It is vital to scale up woefully inadequate adaptation funding for countries on the front-line of climate change. The tools and know-how are there – now we need the political will and  financial clout to make this possible, according to speakers at a high-level UN-wide event at COP26 on 8 November.

Climate change is leading to unprecedented extreme weather. Even if temperature increase is kept to 1.5°C by the end of the century – and at the moment the world is heading towards 2.7°C, impacts will escalate. It is therefore urgent to invest more in adaptation and resilience, the event heard.

“We need concrete deliverables on adaptation and resilience,” said Selwin Hart, Special Adviser and Assistant Secretary-General for Climate Action. “Early investments protect lives and livelihoods. The tools and instruments are available now,” Mr Hart told an event Getting Ahead of Climatic Disasters: Know, Predict, Warn, Act, organized by WMO, the UN Office for Disaster Risk Reduction (UNDRR) and the UN Office for the Coordination of Humanitarian Affairs (OCHA).

Adaptation finance represents just 25 percent of climate finance – half of the target set by UN Secretary-General António Guterres. Currently, this is just US $20 billion per year – compared to projected annual adaptation costs in developing countries of US $300 billion.

And the countries who need it most face “insurmountable challenges” in accessing it, said Mr Hart.

“It is our collective responsibility to fix this problem. The instruments are there,” he said. “The stakes could not be higher. This is a race we cannot afford to lose,” said Mr Hart. 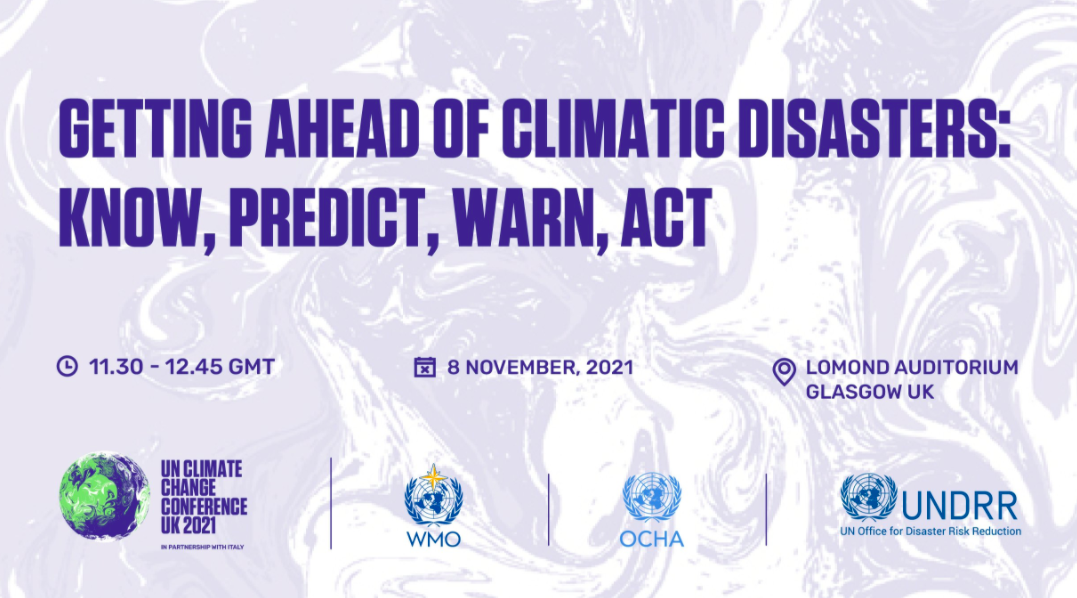 Projections for the coming decades indicate climate changes will increase in all regions. For 1.5°C of global warming, there will be increasing heat waves, longer warm seasons and shorter cold seasons as well as changes in precipitation patterns affecting flooding and drought. At 2°C of global warming, heat extremes would more often reach critical tolerance thresholds for agriculture and health.

“In the best of all scenarios we must adapt to more extreme weather, water, and climate events,” said WMO Deputy Secretary-General Elena Manaenkova.

“A powerful way to do this is by adopting a systemic approach for inclusive early warning and early action for all hazards,” she said.

The event profiled transformative solutions for addressing underlying risk drivers, early warning systems, and anticipatory action to save lives and assets and build resilience. It was held in conjunction with Adaptation, Loss and Damage Day at COP26. Many governments have made new commitments to adaptation financing.

Dr Manaenkova gave examples of WMO initiatives. These include the Global Multi-hazard Alerting System and the Climate Risk and Early Warnings Initiative. WMO is spearheading a Water and Climate Coalition for integrated action to tackle hazards. And it has set up a centre of excellence with UNDRR to advance understanding of systemic and cascading risks, she said.

More support is needed to help translate weather and climate information into anticipatory action decision-making. This is why WMO is stepping up its capacity to provide tailored advice and expertise to the humanitarian sector, she said.

“We need to pivot from a response focus to a focus on prevention and anticipatory action, while also increasing access to multi-hazard early warning systems,” said UNDRR head Mami Mizutori.

This is especially important in protracted humanitarian contexts where vulnerability is compounded due to the dire combination of conflict and disaster risks, said UN Humanitarian Chief Martin Griffiths. 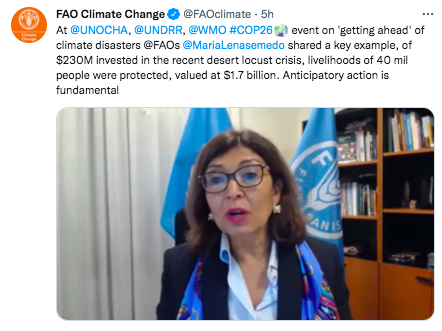 For every dollar invested in anticipatory action, vulnerable households are able to avoid losses up to 7 times the initial investment, said Maria Helena Semedo, Deputy Director-General of the UN Food and Agriculture Organization (FAO).

She cited the example of the desert locust crisis in East Africa in 2020. FAO spent US$ 230 million and managed to protect the livelihoods of 40 million people in rural areas and averted losses of an estimated US$ 1.7 billion.

FAO has dedicated 30 percent of emergency financing to anticipatory action over the next five years as part of its integrated disaster risk and climate management approach.

“We need to transition from crisis management to risk management. We have to change mindset and way we work and be clear that anticipatory action is a big payback,” she said.

WMO Permanent Representative for Niger, Mr Katiellou Gaptia Lawan provided concrete examples of how the Niger Meteorological Service is supporting anticipatory financing and action with co-designed weather and climate services, to help get ahead of floods and droughts that are increasingly affecting their country as a result of climate change.