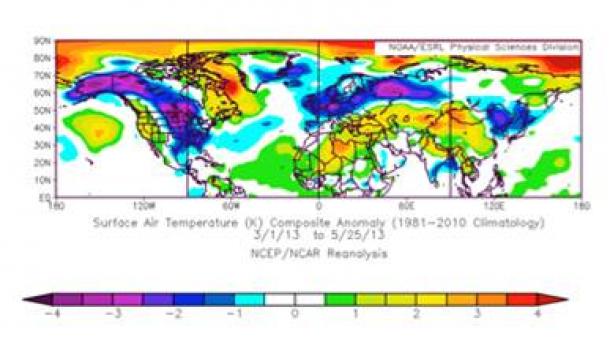 Much of Europe, the United States of America, north-west Russia and parts of Japan had a  much colder than average spring (1 March to 1 June), which ended with heavy rain in some European countries. By contrast, the Arctic region was considerably warmer than normal, as was a large area covering most of central and northern Africa (except Morocco and western Algeria), the Eastern Mediterranean, southern Russia and much of China.

This climate pattern started already in February, with cold Arctic air moving far to the south over Europe and the USA, and also wetter conditions over the eastern USA and western and southern Europe due to inclusion of the cold air in low pressure circulation. Corresponding sea level pressure anomalies showed higher pressure than usual over the Arctic and lower pressure than usual over mid-latitudes. This is a typical pattern of a negative phase of the so-called Arctic Oscillation (AO).  The Arctic Oscillation had several phases of outstandingly negative values during the first half of spring.

In the second half of the spring, the Arctic Oscillation changed to a positive and then to a neutral phase. However, during the cold spell in late May there was still a similar pressure pattern with high pressure over Greenland and low pressure systems to the south, which caused Arctic air masses to flow to western and central Europe.