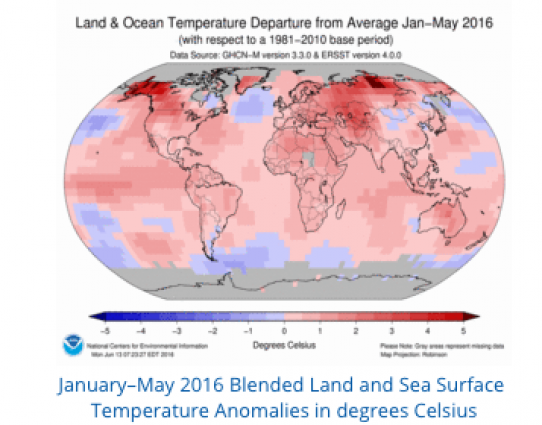 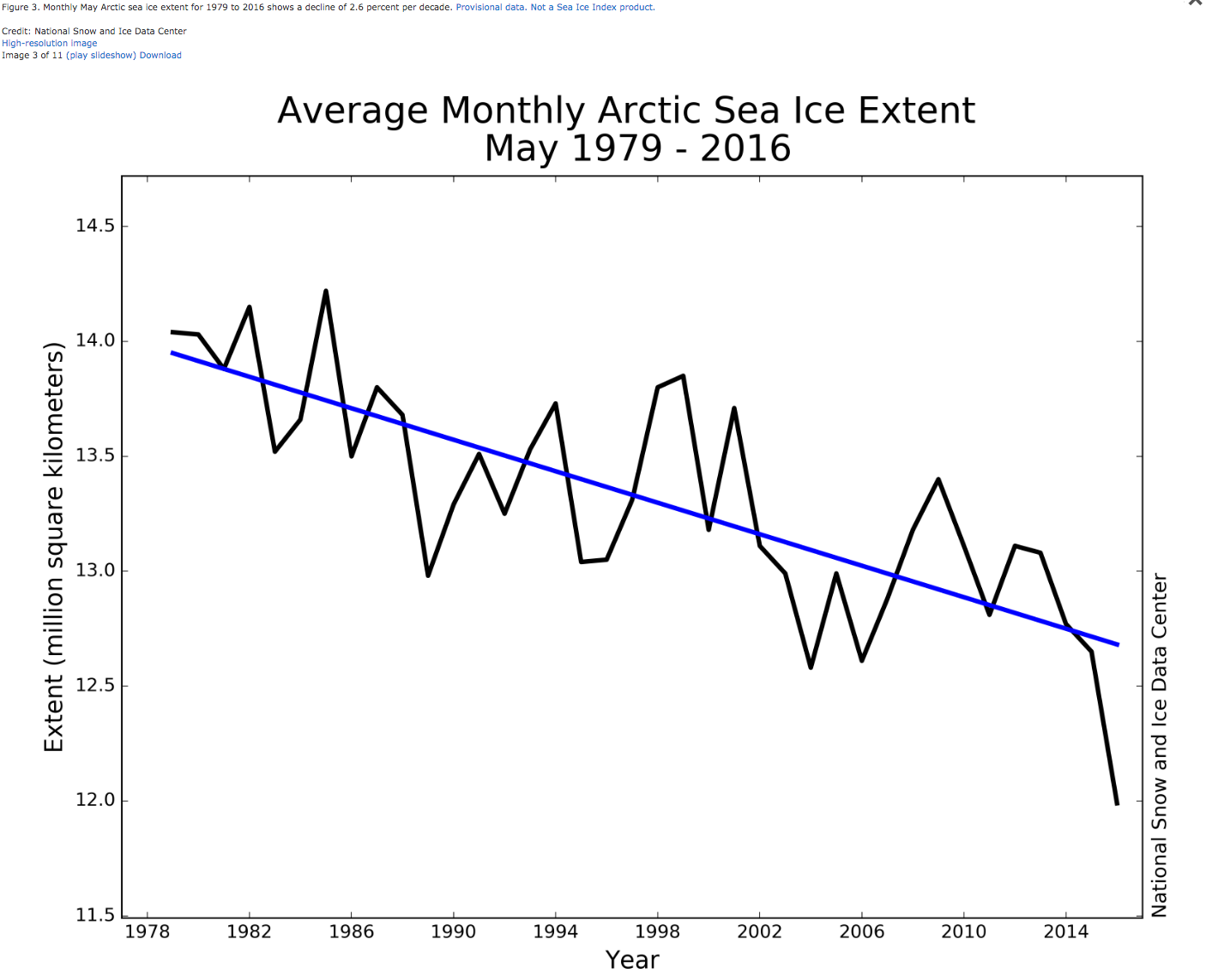 Global temperature records were broken yet again in May 2016, according to data just released by NASA, and the US National Oceanic and Atmospheric Administration, which also reported that it was the hottest (northern hemisphere) spring on record.  The year to date is also the hottest on record.

NOAA reported that the atmospheric concentration of carbon dioxide, which is driving global warming, passed 400 parts per million on 23 May at the South Pole – the last place on earth to breach the milestone.

After five consecutive record months it comes to no surprise that the average global land and ocean surface temperature for January–May 2016 resulted in the warmest such period on record across the world's land and ocean surfaces, at 1.08°C (1.94°F) above the 20th century average of 13.1°C (55.5°F), surpassing the previous record set in 2015 by 0.24°C (0.43°F), according to NOAA

The heat has been especially pronounced in the Arctic, resulting in a very early onset of the annual melting of Arctic sea ice and the Greenland ice sheet. Snow cover in the northern hemisphere was exceptionally low.

The record temperatures in May were accompanied by other extreme events, including very heavy precipitation in parts of Europe and the southern USA, and widespread and severe coral reef bleaching.

“The state of the climate so far this year gives us much cause for alarm,” said David Carlson, Director of the World Climate Research Programme. “Exceptionally high temperatures. Ice melt rates in March and May that we don’t normally see until July. Once-in-a-generation rainfall events. The super El Niño is only partly to blame. Abnormal is the new normal.”

“The rapid changes in the Arctic are of particular concern. What happens in the Arctic affects the rest of the globe. The question is will the rate of change continue? Will it accelerate? We are in uncharted territory.”

Advances in research and observations have increased our understanding of the climate system, and there has also been progress in the science of “attribution” to determine whether a specific extreme weather event was linked to human-caused climate change or to natural climate variability.

The strong El Niño – which has now dissipated – fuelled the high temperatures witnessed so far in 2016. But the underlying cause of global warming remains greenhouse gases in the atmosphere due to human activities. 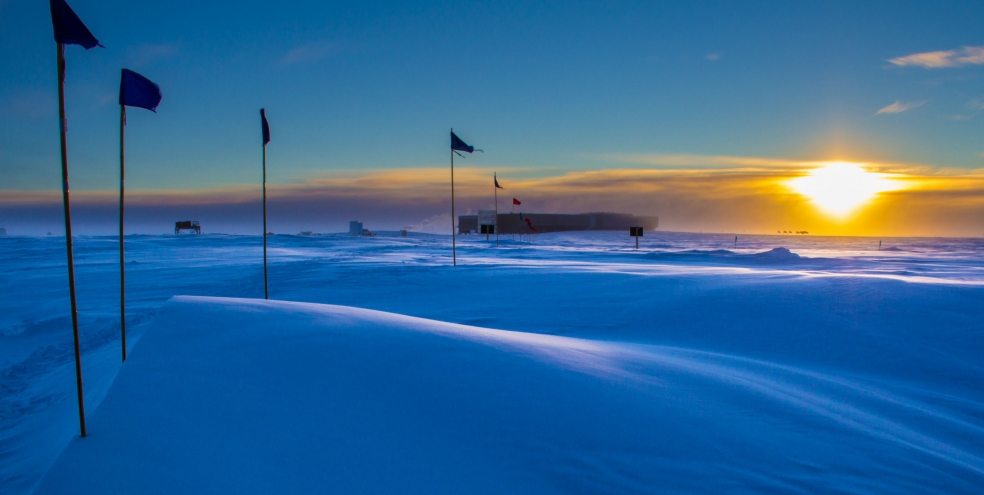 NOAA reported that carbon dioxide concentrations at the South Pole breached the  symbolic milestone of 400 parts per million in 23 May.

“The far southern hemisphere was the last place on earth where CO2 had not yet reached this mark,” said Pieter Tans, the lead scientist of NOAA's Global Greenhouse Gas Reference Network. “Global CO2 levels will not return to values below 400 ppm in our lifetimes, and almost certainly for much longer.”

The human-caused rise in the atmospheric concentration of carbon dioxide is being given an extra boost this year by the El Niño say a team of climate scientists led by the UK’s Met Office, in a paper published in Monday's edition of the journal: Nature Climate Change. As a result, 2016 will be the first year with concentrations above 400 parts per million (ppm) all year round in the iconic Mauna Loa carbon dioxide record.

Richard Betts, of the Met Office Hadley Centre and University of Exeter, is the lead author on the paper. He said: "The atmospheric carbon dioxide concentration is rising year-on-year due to human emissions, but this year it is getting an extra boost due to the recent El Niño event. This warms and dries tropical ecosystems, reducing their uptake of carbon, and exacerbating forest fires. Since human emissions are now 25% greater than in the last big El Niño in 1997/98, this all adds up to a record CO2 rise this year."

May was the hottest May on record. Above-average temperatures were especially pronounced in high northern latitudes, according NASA’s Goddard Institute for Space Studies. It was the hottest spring (March-April-May) on record. The U.S. National Oceanic and Atmospheric Administration still has to issue its global temperature figures for May.

Alaska had its warmest spring on record by a wide margin.  According to Finnish Meteorological Institute statistics, the average temperature in May was 3-5°C higher than usual in most parts of Finland. The all-time record for the average temperature in May was broken at about 20 observation stations.  Most recently, Nuuk in Greenland, saw a June record of 24.8°C on 9 June. 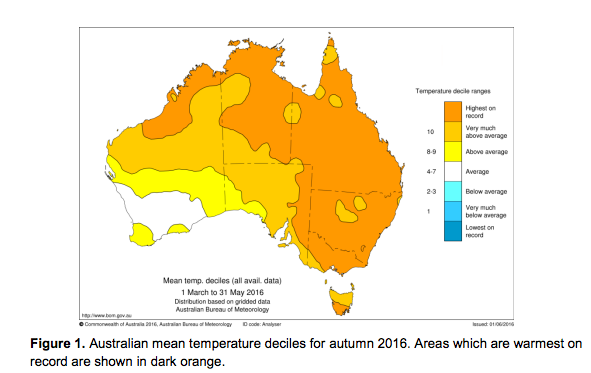 Australia had its warmest autumn on record at 1.86 °C above average, according to the Bureau of Meteorology. More than 53% of the country experienced highest on record mean temperatures, because of strong El Niño Water temperatures to the north and northwest of Australia.

The Northern Hemisphere had exceptionally low snow coverage for both April and May of 2016 and a record low spring (March, April, and May), as reported from 50 years of mapping by Rutgers University’s Global Snow Lab.

The National Oceanic and Atmospheric Administration announced on May 20 that Barrow, Alaska recorded the earliest snowmelt (snow-off date) in 78 years of recorded climate history. Typically snow retreats in late June or early July, but this year the snowmelt began on May 13, ten days earlier than the previous record for that location set in 2002.

From period 28 to 31 May, France witnessed exceptional rainfall. For instance, the department of Loiret saw 92.9 mm in 3 days which is without precedent in the past 30 years. Such amounts are only seen once every 10-50 years according to Météo-France. Paris received 3 months worth of rainfall in a month and May was the wettest month since 1960.

There has been widespread bleaching of reefs in many other parts of the world.