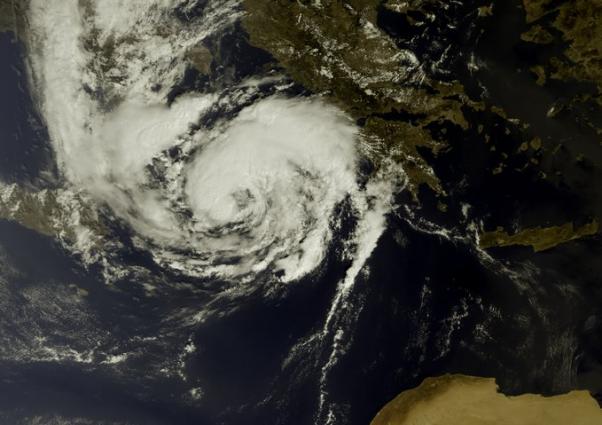 Greece is being impacted by a so-called Medicane (MEDIterranean hurriCANE), bringing high winds and waves and torrential rain and the risk of flooding.

Named Ianos, the storm came ashore over the Greek island of Kefalonia early on 18 September before moving across the mainland. The Hellenic National Meteorological Service issued top-level Red Alerts to warn people of hazards.

This hybrid phenomenon shows some characteristics of a tropical cyclone and others of a mid-latitude storm. Activity historically peaks between September and January. Greece was last hit by a strong medicane in 2018.

Size: Medicanes are smaller, with a diameter usually less than 400 km

Duration: shorter than hurricanes, 24 to 48h

Intensity: the most severe Medicanes can reach the strength of a Category 1 hurricane on the Saffir Simpson scale ( wind speeds of 119-153 km/h (for 1-minute maximum sustained winds)).

Strong winds spinning around a core and torrential rainfall

Eye: an area of rather clear sky and calm wind, which can be seen on satellite imageries

Convection activity releases heat which transforms the phenomenon into a warm-core system, characteristic of a hurricane

Weak wind shear: small difference in between low level and upper level winds. Needed for the convection to maintain its activity – thunderstorms and heavy rainfall.

Unlike with tropical cyclones, there is no formal naming procedure for medicanes,