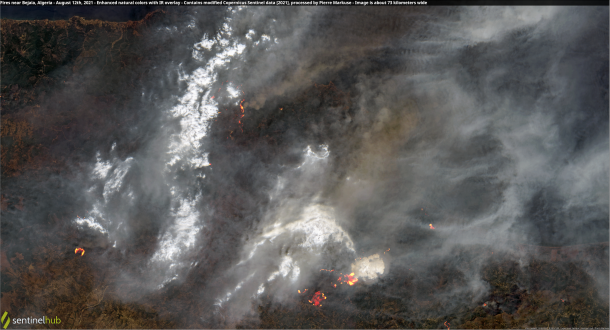 The World Meteorological Organization is seeking to verify a reported temperature of 48.8°C (119.8°F) in Sicily, Italy, on 11 August 2021 and to establish whether this is a new temperature record for continental Europe.

The World Meteorological Organization is seeking to verify a reported temperature of 48.8°C (119.8°F) in Sicily, Italy, on 11 August 2021 and to establish whether this is a new temperature record for continental Europe.

The observation was made by a weather station administered by a regional agro-meteorological network rather than Italy’s national meteorological service. It occurred during an intense heatwave in Italy, Spain and parts of North Africa.

According to the WMO Weather and Climate Extremes Archive, the current verified record of highest maximum temperature for continental Europe is 48.0°C (118.4°F) and was set in Athens on 10 July 1977.

“WMO is actively looking into this observation but at this time we cannot yet confirm or deny its validity,” said WMO Weather and Climate Extremes rapporteur Prof. Randall Cerveny.

“Climate change and temperature increase has spurred a surge in reports of record weather and climate extremes, especially for heat. We have to make sure that these records are verified for the sake of scientific understanding and accuracy,” said Prof. Cerveny, who oversees WMO’s Weather and Climate Extremes Archive of official records.

WMO has established a “rapid response” team of climate experts who analyze these purported new records. This will provide initial guidance to global media and the general public prior to a formal in-depth investigation, which often takes many months. Verification of maximum temperature records is important because it helps us to build up a picture of the weather and climate.

The intense heat in Italy, Spain and North Africa follows an extreme heatwave – accompanied by devastating wildfires in Greece and Turkey – earlier in the month.

August is typically hot and dry in the Mediterranean region. However, the temperatures witnessed this summer are extreme and are typical of what we expect from climate change.

“Currently, there is a large area of high pressure in the upper atmosphere affecting much of the Mediterranean, as well as northern Africa. This high-pressure system leads to a sinking motion in the atmosphere which compresses the air and then heats it up – in what is sometimes referred to as a heat dome. Additionally, under a high-pressure system, winds tend to be light, so the heat does not dissipate, and this further contributes to conditions getting warmer and warmer, and combining with the summer heat from the sun, » said Bob Stefanski, head of Applied Climate Services at WMO.

As the heatwave continues, it is possible that further national records could broken in the coming days, including for Spain, where the current record is 47.3C in Cordoba in 2003. Tunisia has also reportedly seen records broken.

There is also high wildfire threat, which could result in the rapid spread of new fires and limit containment activities of existing fires. Therefore, the extreme hot temperatures and smoke will increase the health risks for the most vulnerable (elderly persons and infants). An additional complication is due to COVID-19 since many cities do have heat-health measures in place such as indoor cooling centers but measures such as wearing masks and social distancing still need to be taken.

The summer of 2021 has seen intense – and in some cases unprecedented heat in parts of the Northern hemisphere, including a temperature of 49.6°C in British Columbia, Canada. The heat in North America has been accompanied by wildfires, aggravated by drought in Western USA.

The newly released Sixth Assessment Report of the IPCC states that with climate change, we are have been observing more frequent and severe high temperature events, and this will continue to do in the future.

A regional IPCC fact sheet for Europe states that  “The frequency and intensity of hot extremes, including marine heatwaves, have increased in recent decades and are projected to keep increasing regardless of the greenhouse gas emissions scenario. Critical thresholds relevant for ecosystems and humans are projected to be exceeded for global warming of 2°C and higher (high confidence).”

The temperature in the Mediterranean area – both in Europe and North Africa – has increased by more than the global average.

The IPCC stated that, for the European Mediterranean, there will be a “Projected combination of climatic impact-driver changes (warming, temperature extremes, increase in droughts and aridity, precipitation decrease, increase in fire weather, mean and extreme sea levels, snow cover decrease, and wind speed decrease) by mid-century and at global warming of at least 2°C and above (high confidence).

Experts cannot say exactly when these records will be broken but Europe will need to prepare for the eventuality of further records being broken with temperatures above 50C being possible in Europe in future.