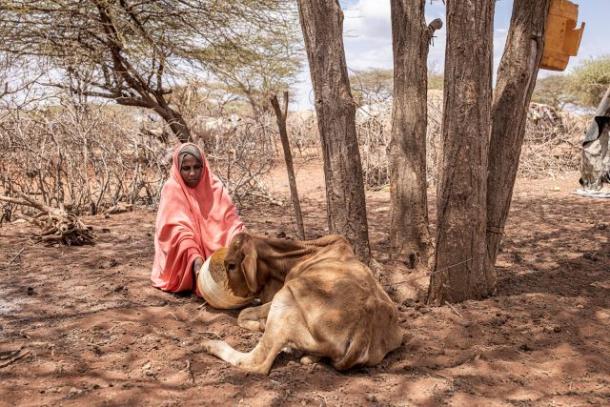 Meteorological agencies, including WMO, and humanitarian partners have issued a joint alert that the threat of starvation looms in East Africa after four failed rainy seasons and that the situation is set to worsen. WMO has also issued a technical brief on the seasonal outlook for the “short rains season.”

A statement issued by the Food and Agriculture Organization of the United Nations on behalf of 14 agencies said that the current extreme, widespread, and persistent multi-season drought affecting Somalia, the arid and semi-arid lands of Kenya, and Ethiopia’s Belg-receiving and eastern and southern pastoral areas, is unprecedented. Four consecutive rainy seasons have failed, a climatic event not seen in at least 40 years.

The latest long-lead seasonal forecasts, supported by a broad consensus from meteorological experts, indicate that there is now a concrete risk that the October-December (OND) rainy season could also fail. Should these forecasts materialize, the already severe humanitarian emergency in the region would further deepen, it said.

The 2022 March-May rainy season appears likely to be the driest on record, devastating livelihoods and driving sharp increases in food, water, and nutrition insecurity. An estimated 3.6 million livestock have died in Kenya (1.5 million) and Ethiopia (2.1 million). In the worst-affected areas of Somalia, it is estimated that 1-out-of-3 livestock have perished since mid-2021.

Over a million people have been displaced in Somalia and southern Ethiopia. Existing water deficits have been exacerbated by very high air temperatures, which are forecast to continue into the June-September dry season. Rangeland conditions will deteriorate faster than usual, driving additional, widespread livestock deaths, as well as population displacements. In cropping areas, harvests will again be well below average, causing a prolonged dependency on markets, where households will have limited food access due to high food prices, said the alert.

The predicted below-average OND season would drive a deterioration of an already dire food security and malnutrition situation in 2023. However, irrespective of rainfall between October and December, conditions will not recover quick enough to see food security improvements before mid-2023. A rapid scaling up of actions is needed now to save lives and avert starvation and death, said the statement.

This alert provides an example of the hydro-meteorological and humanitarian community coming together in order to catalyse Anticipatory Action and translating complex hydromet information into simple actionable advice.

The current drought affecting the Horn of Africa is likely the worst in 40 years after a fourth consecutive below-average rainfall season. The climate conditions that cause the current drought are expected to prevail until the end of this year, posing a serious threat to the October-December 2022 season. The region was affected by one of the worst Desert Locust outbreaks during 2019 – 2020.

During 2020, 2021 and 2022, a multiyear La Niña event, contributed to less rainfall across eastern Africa including (Somalia, southeastern Ethiopia, and Eastern Kenya) – as we saw also in the devastating drought of East Africa in 2010-2011.

La Niña is part of our climate’s natural variability. However human induced climate change is amplifying the impact of naturally occurring weather and climate events and leads to more intense and severe extremes. Climate change is also increasing air temperatures which exacerbates droughts increasing the evapotranspiration (loss of moisture from plants and soil).

The Intergovernmental Panel on Climate Change Sixth Assessment Report states that there is evidence of a human contribution to observed decreases in mean precipitation in Northeastern Africa and observed increase in the intensity and frequency of hot extremes. A decreasing precipitation amount of −2 to −7% per decade (1983-2010 period) was reported for the March-to-May “Long rains season” in eastern Africa.

The impacts in food security are also extensive. In Africa, agricultural productivity growth has been reduced by 34% since 1961 due to climate change, more than any other region and there is high confidence that future warming will negatively affect food systems by shortening growing seasons and increasing water stress.

The WMO community has worked actively with the humanitarian sector to try to reduce the impacts of this devastating drought. We will continue to engage and to strengthen climate services and early warnings to protect lives and livelihoods.

The full statement issued by FAO is available here: